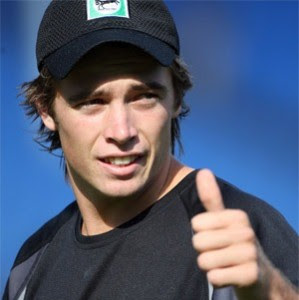 OK. It was a pretty dismal batting display. Granted. How could we be bowled out for 68 at Lords when we needed only 239 runs to win?

But as Kiwis and Black Caps supporters we need to pick ourselves up, dust ourselves down and look for the positives.

And for that we need to indulge in a little cognitive behavioural therapy (CBT) to help us believe that things could actually have been a lot worse.

So here are twenty things about the game to be thankful for (in no particular order but the second to last is definitely the most satisfying!) J

Yes of course I concede that this is really scraping the barrel and that not all relate to cricket, but hey, so what!

The key thing is that if you are a Kiwi you will feel better after reading this list.

1. We were still in the game after three days until we starting batting this morning

2. This was not our worst test performance this year. We only scored 45 in the first innings of the first test in South Africa in January.

3. Tim Southee (pictured) bowled well and became only the second New Zealander (after Dion Nash) to claim a ten-wicket haul in a Test at Lord's.

4. None of the England eleven could score a century against us and they could only manage a total of 445 runs in two innings.

5. After Joe Root’s 71, Taylor’s 66 and Williamson’s 60 in the first innings were the second and third highest scores in the match.

7. We managed to take 20 wickets for the first time in a test since playing Sri Lanka last year.

9. We did not score fewer runs than the highest ever total by a Kiwi number 11 batsman (Collinge’s 68no against Pakistan in 1972-3 in Auckland which I personally witnessed).

10. No Kiwi batsman scored a pair in the match (unlike Prior). OK I concede that Boult didn’t score any runs but he was not out in the second innings.

11. Anderson in the first innings and Broad in the second were in scintillating form and would have given anyone trouble. English captain Alistair Cook called it the best fast bowling he had ever seen and Broad said it was his best bowling ever. Kiwi skipper Brendon McCullum called it 'an hour of madness'.

12. England had to bat twice to beat us which South Africa did not have to do in either test in January.

13. We still drew with England in a three match series down under earlier this year so this is the first time they have managed to beat us in four attempts.

14.  It’s not like cricket is our premier sport – we are 8th in the world rankings whilst England are 2nd so they should rightfully thrash us.

16. There are three New Zealand teams in the top six of the super fifteen after this weekend’s matches and we are still the rugby world cup champions.

18. We were the only football team to come home from the last world cup unbeaten. Not even the eventual winners Spain could match that.

19. We bowled England out for 64 in the final innings of the 1978 test in the Basin reserve when they only needed 137 to win the game. On that occasion Richard Hadlee took 6 for 26 against a team that included Boycott, Botham and Willis.