Time lapse imaging of embryos – exciting breakthrough or just eugenics by another name? 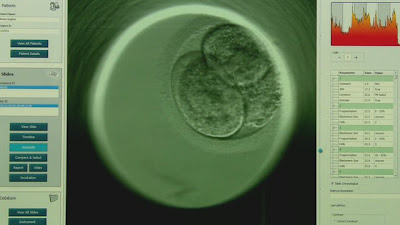 Various media outlets (including The Times (£), The Telegraph, BBC, The Independent and The Guardian) have published articles reporting on how fertility specialists from Nottingham have developed a radical technique that will ‘dramatically improve’ the chances of IVF couples having a baby.

About one in eight couples have trouble having children through natural conception and around 48,000 women currently undergo IVF treatment each year resulting in about 12,200 IVF births, an overall success rate of 25%.

This failure rate of 75% causes immense emotional upset to affected couples, many of whom have paid between £5,000 and £10,000 for each treatment cycle.

However the new  procedure, which uses ‘time-lapse imaging’ to monitor the health of embryos by taking thousands of digital pictures to identify ones that are developing well, could raise the chance of a live birth to 78%, about three times the national average.

The new technique identifies the ‘best embryos’ to be implanted into the womb based on the time it has taken to develop between two key stages in the early life-cycle of the embryo.

Thousands of time-lapse pictures taken during the first few days of an IVF embryo's life are used to identify the time between the first appearance of the fluid-filled cavity, called the blastula (normally 97 hours), and the full blastocyst (122 hours).

In embryos at high risk of aneuploidy (extra chromosomes) these steps occurred about 6 hours later on average. Aneuploidy is the single biggest cause of IVF failure.

To test the system, the doctors ran the program on time-lapse images of 88 embryos that had been recorded previously for 69 couples at the clinic. Some 61% of the embryos ranked as low risk for abnormal chromosomes led to live births, compared with none of those ranked as high risk.

Around a dozen private and NHS clinics are currently using time-lapse embryo imaging. It costs around £750 in addition to about £3,000 for IVF.

The £750 cost compares favourably with the current cost of £2,500 for Pre-implantation Genetic Screening, an invasive test which removes cells from the early embryo for analysis.

If the new imaging test proves to be effective in larger trials it seems likely that it will be used much more widely.

What is singularly lacking from any media coverage of this research however is any discussion of the ethics.

But let’s think about what is actually happening here.

Embryos are being created in a laboratory and those with aneuploidy are being identified and discarded.

Some of these will have the commoner trisomies (three rather than two copies of a particular chromosome) – Down’s syndrome (trisomy 21), Edward’s syndrome (18) and Patau’s syndrome (13) – where affected babies are often born alive.

Some will have other trisomies (like trisomy 15, 16 and 22) and inevitably will either fail to implant or result in miscarriages.

So is it right to implant those embryos more likely to survive and throw away the others?

Well that surely depends on what these tiny organisms actually are.

They are undoubtedly individual human lives, but what status do they have? Are they potential human beings or are they human beings with potential?

Philosophers like Singer, Glover and Harris will tell you that they are alive but non-persons because they do not yet have functioning nervous systems.

But others, who would argue that human life from the time of fertilisation should be shown the utmost respect and afforded protection would say that every living human organism – no matter how young, old or disabled and regardless of its intellectual capacity – is also a human person with rights.

I know what I think, but what do you think and why? They are either persons or not persons. Which is it?

Is this new technique the 'most exciting breakthrough in IVF treatment in 30 years'? Or is it just eugenics by another name?

It makes all the difference in the world.
Posted by Peter Saunders at 14:38