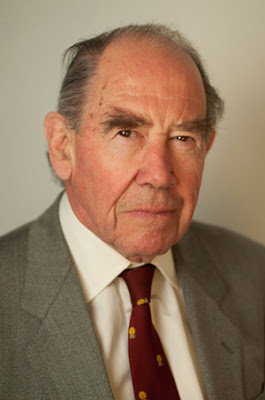 Sir Terence English (pictured) is an 81 year old retired cardiac surgeon who lives in Oxford. He is also a patron of Dignity in Dying (the former Voluntary Euthanasia Society) and is on the steering group of its medical wing, Healthcare Professionals for Assisted Dying (HPAD).

As such he is one of a small minority of doctors in this country (a quarter of one per cent belong to HPAD) who think that medical practitioners should be licensed by the state to dispense lethal drugs to mentally competent, terminally ill adults who wish to kill themselves.

It is also contrary to every serious code of medical ethics that has ever been drafted including the Hippocratic Oath, the Declaration of Geneva, the International Code of Medical Ethics and the Statement of Marbella.

But last weekend Sir Terence wrote a letter to the Sunday Telegraph accusing me of ‘scaremongering’ for arguing that giving doctors such authority and power is not a good idea.

He commended the BBC for giving Lord Falconer a platform to promote his ‘assisted dying’ bill unopposed on BBC breakfast television and claimed that the bill had a ‘narrow focus’ which did not involve ‘euthanasia’ or ‘disabled people’ – only ‘mentally competent, terminally ill adults’.
Tellingly he gave no arguments to support his position.

‘Assisted dying’ is a euphemism with no meaning in law but it means supplying lethal drugs to people who are terminally ill with the purpose of helping them to commit suicide.

But more than this, from a practical point of view one merges into the other. If a doctor places lethal drugs in a person’s hands it is assisted suicide, but on his tongue it is euthanasia. If the doctor sets up a syringe-driver and pushes it himself it is euthanasia, but if the patient applies pressure or flicks the switch it is assisted suicide.

In one in seven cases of assisted suicide there are problems with ‘completion’ leaving the doctor to step in to finish the job, which is why legalising one inevitably legalises the other. There will also inevitably be those who claim that they are being discriminated against because they lack the capacity, even with assistance, to kill themselves, and so need someone to do it for them. This is why any law allowing assisted suicide only (and not euthanasia) would immediately be open to challenge under equality laws.

The reality is that assisted suicide is just another form of euthanasia.

Disabled people and people with terminal illness are simply not distinct groups but considerably overlapping categories. This is why every major disability advocates group in the UK – including Disability Rights UK, SCOPE, Not Dead Yet and UKDPC – are opposed to a change in the law.  Paralympian Tanni Grey-Thompson, in passionately voicing these concerns, has recently called assisted suicide a ‘chilling prospect for disabled people’.

Falconer’s three criteria of ‘terminally ill’, ‘adult’ and ‘mentally competent’ are equally malleable and open to interpretation as argued in the recent critique by leading parliamentary think tank ‘Living and Dying Well’.

Doctors are notoriously unreliable in estimating lifespans, ‘adult’ is easily open to extension to 12 to 14 year olds using the concept of ‘Gillick competence’ and the experience in Belgium and the Netherlands shows that mentally incompetent people (babies with severe disabilities and adults with dementia) quickly get drawn into the remit of laws allowing euthanasia or assisted suicide. Assessing mental competence is a specialised skill that not all doctors have and it can easily be clouded by the presence of depression, which itself increases suicidal ideation.

It is for these reasons that in every country which has legalised any form of ‘assisted dying’ we have seen incremental extension – an increase in total numbers, a broadening of categories of people to be included and an increase in ending life through parallel means such as deliberate withdrawal of treatment, intentional morphine overdose or so-called ‘terminal sedation’.

But the biggest problem with giving doctors the power and authority to end life, even with a patient's consent, is that doctors cannot be trusted with this kind of power.

Whatever one thinks of the morality of abortion, very few will disagree that the abortion law has been flagrantly abused, and yet it employs a very similar system to that proposed by Falconer - giving doctors licence to end life in so-called strict circumstances. Currently about 98% of all UK abortions (196,000 each year) are outside the bounds of the Abortion Act. Illegal pre-signing of authorisation forms is widespread - perjury on a massive scale – and yet no prosecutions take place. We would see the same flouting of the law and pushing of boundaries, along with the same reluctance by the police or crown prosecution service to intervene, if assisted suicide or euthanasia were to be legalised.

Doctors are human and prone to financial and emotional pressure, but there are also some who sadly will abuse any power given to them. The recent experience of the Liverpool Care Pathway debacle, where some doctors and other health professionals abused what was essentially a good therapeutic tool through laziness, neglect or deliberate malpractice, underlines further why they should not be trusted with the even greater power to end life actively. Allowing doctors to have this power would make them the most dangerous people in the state.

Our current law is clear and right. By prohibiting all euthanasia and assisted suicide it acts, through the penalties it holds in reserve, as a powerful deterrent to exploitation and abuse. And by allowing some discretion to judges and prosecutors in hard cases it exercises this stern face with a kind heart. It does not need changing.

To point out the consequences of changing the law is not scaremongering as Sir Terence English would have us believe. It is to exercise caution in the light of solid evidence and sound argument.

The first duty of parliament is to protect its citizens and this is what the current law does. We cannot chip away at it without at the same time removing legal protection from vulnerable people and putting them under pressure to end their lives so as not to be a financial or emotional burden to others.