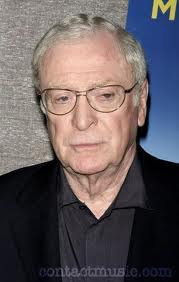 Sir Michael Caine (pictured) has revealed how he asked a doctor to help his terminally ill father to die. Maurice Micklewhite, a Billingsgate fish market porter, apparently died in hospital at the age of 56 in 1955 after suffering from liver cancer.

Sir Michael told Classic FM: ‘My father had cancer of the liver and I was in such anguish over the pain he was in, that I said to this doctor, I said “Isn't there anything else you could, just give him an overdose and end this”, because I wanted him to go and he said “Oh no, no, no, we couldn't do that”. Then, as I was leaving, he said “Come back at midnight.” I came back at midnight and my father died at five past 12. So he'd done it...’

He said his father had been given just three to four days to live when he asked the doctor to perform the mercy killing. Asked if he agreed with voluntary euthanasia, Sir Michael, 77, said: ‘Oh I think so, yeah. I think if you're in a state to where life is no longer bearable, if you want to go. I'm not saying that anyone else should make the decision, but I made the request, but my father was semi-conscious.’

We know nothing about this sad case apart from what Sir Michael Caine has told us and should therefore be very wary in drawing conclusions about what actually happened, especially in the light of the recent controversy around Ray Gosling’s discredited confessions about smothering a gay lover. Elderly celebrities have their own vulnerabilities which should not be exploited by media people hungry for a good international news story or campaigners looking for another friendly face to drive their campaign to soften up public opinion on euthanasia.

We are told that Caine’s father had only days to live but cannot know whether he died from a lethal injection or from the disease itself and have no objective medical evidence to draw on that might help us to know for sure. Witnesses apart from Sir Michael may be long dead.

We also need to take note that this case occurred 55 years ago in 1955 when palliative care was not as it is today and when many dying patients were not managed well. It is simply not necessary to kill the patient in order to kill the pain and any doctor who uses pain as a defence for ending a patient’s life is either incompetent, inadequately trained or just being disingenuous.

Earlier in July this year an international survey by the Economist Intelligence unit ranked Britain first in ‘Quality of End-of-Life Care’ which includes indicators such as public awareness, training availability, access to pain killers and doctor-patient transparency.

The British Medical Association, at its annual general meeting in July this year passed a motion affirming that requests for assisted suicide and euthanasia are very rare when patients are being properly cared for and called for better training of doctors and education of the public about palliative care.

That this Meeting, recognising that persistent requests for assisted suicide and euthanasia are very rare when patients' physical, social, psychological and spiritual needs are being appropriately met, calls on the BMA to campaign for:
(ii) better training in palliative medicine for all GPs and hospital doctors involved in managing dying patients;
(iii) better education of the public about what good palliative care can achieve.

We should also be wary of any media reports linking this case with the recent DPP guidelines on prosecution criteria for assisted suicide.

If Michael Caine’s father was indeed killed intentionally by his doctor with an overdose of painkiller without actually requesting it (being semi-conscious at the time) then this would not be a case of assisted suicide or voluntary euthanasia but rather non-voluntary euthanasia. And the DPP has recently refused to excuse any kind of euthanasia on compassionate grounds.

Is was somewhat inevitable that pressure groups such as Dignity in Dying, formerly the Voluntary Euthanasia Society would seize on this case involving a high profile celebrity as an opportunity to further their agenda of legalising so-called ‘assisted dying’ for the ‘terminally ill’ (two terms they are not willing to define precisely).

However if they are asking for the law to be changed for cases such as this then they are extending their agenda beyond assisted suicide for the mentally competent terminally ill to include non-voluntary euthanasia for the mentally incompetent.

Are we seeing more evidence of incremental extension here? I wonder.

The House of Lords has twice in the last five years (in 2006 and 2009) rejected any change in the law to allow ‘assisted suicide’ for so-called compassionate reasons on grounds of the danger such a move would pose to public safety – especially for disabled and elderly people who might feel their lives to be a burden to others. All medical institutions including the BMA, RCGP, RCP and Association for Palliative Medicine remain opposed to any change in the law for similar reasons.
Posted by Peter Saunders at 06:47