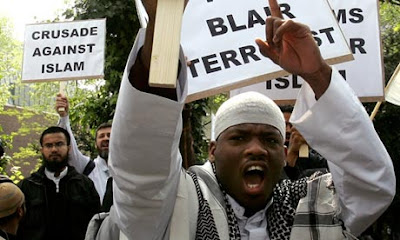 The search for what radicalised Michael Adebolajo (pictured) and Michael Adebowale to kill soldier Lee Rigby in Woolwich last week is leading increasingly to the influence of al-Muhajiroun leaders like Anjem Choudary and Omar Bakri Mohammed.

Al-Muhajiroun is an Islamist group fronted by the radical Luton-based cleric Anjem Choudary, which has been rebadged under a multitude of brands since being proscribed by the previous government.

Its founder, Omar Bakri Mohammed, a Lebanon-based preacher, who was banned from Britain and once ran courses in fighting jihad at a disused nunnery in Sussex, claimed last week that he had converted Adebolajo.

If Theresa May is to stop thousands being radicalised in Britain however she needs to look beyond al-Mihajiroun to the text that is radicalising that movement, the Qur’an itself.

As Jay Smith points out in a Pfander Films video published this week, Adebolajo and Adebowale were in fact just taking the Qur’an literally (See also Answering Islam here which makes the same point).

Smith asks why these two men killed this soldier, attempted to decapitate him, pulled him into the street and then, without attacking anyone else, waited around for the police to arrive before running into their guns.

Sura 5:32, which was ironically quoted this week by Nick Clegg in support of peace, was the very verse that Adebolajo quoted to the cameras to justify his action:

So what should a Muslim fighting jihad do with such people? The answer in is Sura 47:4:

‘So when you meet those who disbelieve [in battle], strike [their] necks until, when you have inflicted slaughter upon them’

And the reward for losing one’s life in carrying out such activity? Well, it’s Paradise, as explained in Sura 47:4, 5 & 6:

‘And those who are killed in the cause of Allah - never will He waste their deeds… He will guide them and amend their condition. And admit them to Paradise, which He has made known to them.’

By shooting them without killing them the police denied these two Muslims their actual aim, promotion to Paradise under the sight of the world’s media cameras.

Theresa May and Nick Clegg cannot of course ban the Qur’an, which is why they must seek instead to reinterpret it to claim that it is not saying what these men believed it was actually saying.

But if we don’t like what happened on the streets of Woolwich, it is perhaps the Qur’an itself, and not just al-Mihajiroun, that we should be calling into question.

Adebolajo justified his actions as ‘an eye for an eye and a tooth for a tooth’.

By contrast Jesus, when one his disciples (Peter) took up the sword urged him to place it back in its sheath:

‘Put your sword back in its place,’ Jesus said to him, ‘for all who draw the sword will die by the sword’ (Matthew 26:52)

And he urged them not to follow the ‘eye for an eye’ directive but rather to ‘turn the other cheek’:

‘You have heard that it was said, “Eye for eye, and tooth for tooth.” But I tell you, do not resist an evil person. If anyone slaps you on the right cheek, turn to them the other cheek also.’ (Matthew 5:38, 39)

The history of Islam began with bloody military conquest by Muhammad and his followers.

But Christianity began with the death of Jesus (on our behalf) and of his twelve disciples eleven gave their lives as martyrs in his service because they preached the word of God rather than taking up the sword. It was a peaceful revolution that conquered the Roman Empire through spreading love and the good news of Jesus' death and resurrection.

This is the same love and good news that Christians are called to spread today to all people whatever their age, sex, race, ideology or creed. And it is for this reason that I join many in condemning without reservation not only the Woolwich atrocity itself but also any violent reprisals against Muslims by any British citizens.

It is true that since the first century others have taken up arms in the name of Christ. But this was never part of Jesus’ teaching. It was however, according to the Qur'an, part of Muhammad’s.
Posted by Peter Saunders at 06:19