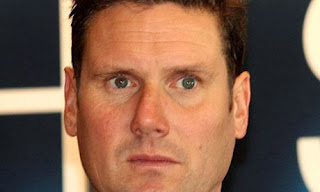 The Director of Public Prosecutions, Keir Starmer (pictured), said yesterday that he would not be prosecuting two doctors caught in a Telegraph sting who authorised abortions on grounds of sex selection.

The decision that a prosecution would not be in the public interest had previously fuelled massive outrage but Starmer claimed that in reaching his conclusion he ‘fully consulted with the police who agreed with him’.

In a detailed statement the DPP argued that ‘the law does not, in terms, expressly prohibit gender-specific abortions; rather it prohibits any abortion carried out without two medical practitioners having formed a view, in good faith, that the health risks of continuing with a pregnancy outweigh those of termination.’

‘On the facts of these cases, it would not be possible to prove that either doctor authorised an abortion on gender-specific grounds alone,’ he concluded.

In making his case to the attorney general who had sought ‘urgent clarification’ of the reasons, Starmer drew heavily on medical guidelines to justify his position.

He quoted the British Medical Association Handbook of Ethics and Law (2012) advising doctors that ‘there may be circumstances, in which termination of pregnancy on grounds of fetal sex would be lawful’.

Although he said this guidance was ‘far from clear’, it indicated the BMA’s view that ‘termination on the grounds of the gender of the foetus may be lawful if the effects of the pregnancy may be such that the continuance of the pregnancy would involve risk, greater than if the pregnancy were terminated, of injury to the physical or mental health of the pregnant woman or any existing children of her family’.

He also quoted an unnamed ‘Programme Manager at the Department of Health’ who ‘indicated that many doctors feel that forcing a woman to proceed with an unwanted pregnancy would cause considerable stress and anxiety.’

‘Procuring a miscarriage’ is an offence contrary to section 58 of the Offences Against the Person Act 1861.

Of the approximately 200,000 abortions which are carried out in Britain each year 98% are recorded as being on this basis and of these 99.96% of terminations are on the risk to the woman’s mental health alone.

As I have previously argued, these abortions are all technically illegal, as there is no sound medical evidence that continuing with a pregnancy ever constitutes a greater risk to a mother’s mental health than having an abortion.

But in practice the mental health clause is widely used by doctors, many of whom have not even seen the patient in question, as a convenient box to tick effectively to authorise abortion on demand.

Keir Starmer defended the initial decision of a CPS colleague not to prosecute in the two cases as ‘properly taken and sound’ and claimed that the law required prosecutors to prove that the doctors ‘did not carry out a sufficiently robust assessment’ of the health of the woman concerned before coming to their decision.

He added that the ‘limited’ medical guidelines on the issue made this impossible and that it was now for others to decide whether these guidelines should be tightened.

The attorney general Dominic Grieve said he was satisfied that Mr Starmer had taken the decision ‘properly and conscientiously’ and that ‘it is for the DPP to make his decisions independently and based on the individual facts of the matter’.

Abortion is against every historic code of medical ethics including the Hippocratic Oath, the Declaration of Geneva and the International Code of medical Ethics. As recently as 1947 the BMA called it ‘the greatest crime’.

But doctors have now become abortion’s chief perpetrators and are been given a free hand to carry it out in Britain on an industrial scale without proper regulation and without fear of prosecution. There have been only a handful of prosecutions since the Abortion Act came into being 46 years ago.

So there we have it. The doctors betray their ethics and conspire to break the law on a massive scale.

The DPP lacks the balls to prosecute, defers to the doctors and passes the buck to parliament.

The police play poodle to the DPP. The attorney general washes his hands of the whole affair and parliament turns a blind eye.

Meanwhile over seven million future British citizens are sacrificed on the altar of political expediency. A law that is not upheld – or is perhaps even unenforceable - is no law at all.

What a sorry state of affairs.

I gather that David Burrowes MP has called for an urgent parliamentary debate on the matter tomorrow and intends to ask the attorney general a number of searching questions about how we reached this point.


I wish him every success.
Posted by Peter Saunders at 23:58