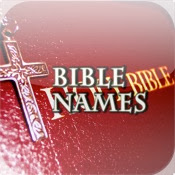 That’s a lot of words.

Given that 70% of the Bible is narrative - and other sections list family names and genealogies in great detail - there are a phenomenal number of different named individuals, from Er to Maher-shalal-hash-baz!

Perhaps it is not surprising that many pairs of people with similar or identical names are easily confused.

Here, for your entertainment, and possibly also your education, are twenty such couples.

First are those with similar but not identical names.

1. Ahijah and Abijah. One was the prophet who tore his coat into twelve pieces and gave ten to Jeroboam, to signify that he would lead the ten northern tribes of Israel. The other was a King of Judah who did not follow the Lord whole-heartedly but wonan unlikely victory against huge odds when his men asked for God’s help.

2. Micah and Micaiah. Both were Old Testament prophets. The first predicted Jesus’ birth in Bethlehem in the book named after him. The second courageously spoke the truth to King Ahab, when no one else would, in spite of being imprisoned as a result.

3. Abimelech and Ahimelech.  The first was the son of Gideon who murdered his seventy brothers and later died a violent death when hit on the head by a millstone dropped by a woman during a siege. The second was a priest whose loyalty to David cost him his life at the hands of Saul. He had a grandson of the same name.

4. Amos and Amon. Amos was an Old Testament prophet who was called as a shepherd and predicted a major earthquake. Amon was a king of Judah who revelled in idolatry and was assassinated by his officials after being on the throne for only two years.

6. Adoni-Zedek and Adoni-Bezek. The first was the Amorite king of Jerusalem who was defeated by Joshua on the day the latter commanded the sun to stand still. The second was a Canaanite king in the time of the judges who had a penchant for cutting off his enemies’ great toes.

7. Jude and Judah. The first was a brother of Jesus and wrote the New Testament letter of the same name. The second was one of the twelve sons of Israel and an ancestor of Jesus Christ, ‘the Lion of Judah’.

8. Joram and Jehoram. Both were Old Testament Kings; Joram of Israel (he was the son of Ahab and Jezebel) and Jehoram of Judah. They were related by marriage as Jehoram married Joram’s sister. Neither did much good and Jehoram passed away, it is said, ‘to no one’s regret’.

9. Uz and Buz. Abraham’s nephews. Their mother may have had difficulty telling them apart but seemed to have a liking for unusual names. Her other sons were called Kemuel, Kesed, Hazo, Pildash, Jidlaph and Bethuel.

10. Rehoboam and Jeroboam. Rehoboam was the son of Solomon who was king at the time the ten northern tribes of Israel rebelled. Jeroboam led the rebellion.

11. Elijah and Elisha. Elijah was one of the most famous of the Old Testament prophets. Elisha was his apprentice and later surpassed him, possessing a ‘double measure’ of his spirit.

But when two people have exactly the same name even biblical editors can get them mixed up.

12. Daniel and Daniel. The best known was the famous prophet who was rescued by God from a den of lions. His book of prophecy tells about the rise and fall of the empires of Babylonian, Median, Persian and Greek Empires, much of it before it actually happened. The lesser known was the son of David’s second wife Abigail.

13. Saul and Saul. One in each Testament: the former was the first king of Israel, who rejected God and was rejected by him. The second persecuted the early church but was converted on the Damascus Road and became one of Christ’s Apostles, changing his name to Paul. He later established churches all over the known world and wrote 13 books in the New Testament.

14. Joseph and Joseph. Again, one in each Testament: the first was one of the twelve sons of Jacob (later renamed Israel), who was sold as a slave by his brothers. He later ended up running the Egyptian Empire and saved its people, and his own family, from starvation during a famine. The latter was the husband of Mary and father of Jesus.

15. Mary and Mary. One was wife of Joseph and mother of Jesus. The second (Mary Magdalene) was a follower of Jesus and the first witness to his resurrection.

16. Tamar and Tamar. Both were the victims of sexual abuse. The first was Judah’s daughter in law who had two sons by him through posing as a prostitute after he had mistreated her. She is listed in Jesus’ genealogy in Matthew 1. The second was the sister of Absalom and daughter of David, who was raped by her half brother Amnon. The event led directly to Absalom’s murder of Amnon and subsequent rebellion against David.

17. Joshua and Joshua. The former was the successor of Moses who led the people of Israel out of the wilderness and into the Promised Land. The second was a high priest referred to the book of Zechariah who was cleansed from his sin by God. Joshua is a Hebrew word meaning ‘saviour’; the Greek equivalent is Jesus.

19. Judas and Judas. Both were disciples of Jesus. Judas Iscariot betrayed him but Judas the son of James (also known as Thaddaeus) was faithful.

20. Zechariah and Zechariah. Both were Old Testament prophets. The first, Zechariah son of Berekiah, was the author of the book of the same name. The second was the son of Jehoiada the priest. He confronted king Joash over his idolatry but paid for it with his life. A New Testament editor appears to confuse the two in Matthew 23:35. Zechariah is one of the commonest names in the Bible and is also shared by a lesser known king of Israel and the father of John the Baptist.

No doubt you can think of other confusing biblical couplets and similarities, but of all the Bible characters one life stands out as absolutely unique: the one solitary life of Jesus Christ (literally ‘Saviour Messiah’).

Jesus  marks himself out by his words, claims and actions to be God in the flesh: Son of God, Son of Man, Lamb of God, Prince of Peace, Creator and Sustainer of the Universe, Lord, Judge and Saviour.

As the Apostle Peter said to the rulers and elders in Jerusalem, he is the only way to God:


‘Salvation is found in no one else, for there is no other name under heaven given to mankind by which we must be saved.’ (Acts 4:12)
Posted by Peter Saunders at 08:05