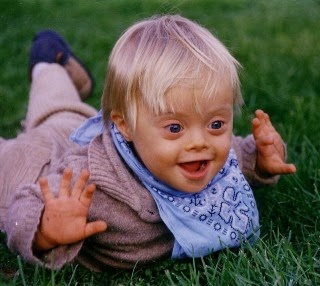 It is worth, in this context, remaking the point that the most common disability for which babies are aborted in the UK is not anencephaly but Down's syndrome (DS).

This is usually on the basis of the perceived burden that children with DS will impose on families and the belief that the lives of disabled children are somehow not worth living. Is this justified?

Brian Skotko, a clinical fellow in genetics at Children’s Hospital Boston, published a series of three studies in the American Journal of Medical Genetics in 2011 on the impact children with Down’s syndrome have on families (these have been previously covered on the CMF blog here and here and in this submission).

The results are incredibly revealing.

In his first study , 822 brothers and sisters were asked about their feelings and perceptions toward their sibling with Down's syndrome (DS).

More than 96% of brothers/sisters who responded to the survey indicated that they had affection toward their sibling with DS; and 94% of older siblings expressed feelings of pride. Less than 10% felt embarrassed, and less than 5% expressed a desire to trade their sibling in for another brother or sister without DS.

Among older siblings, 88% felt that they were better people because of their siblings with DS, and more than 90% planned to remain involved in their sibling's lives as they became adults. The vast majority of brothers and sisters described their relationship with their sibling with DS as positive and enhancing.

In the second study parents of children with Down's syndrome (DS) were asked how they felt about their lives. Of the 2,044 respondents, 99% reported that they loved their son or daughter; 97% were proud of them; 79% felt their outlook on life was more positive because of them; 5% felt embarrassed by them; and 4% regretted having them.

The overwhelming majority of parents surveyed reported that they were happy with their decision to have their child with DS and indicated that their sons and daughters were great sources of love and pride.

But the third study was most interesting of all as it explored the self-perceptions of children with Down’s syndrome.

Of 284 people with Down's syndrome (DS), ages 12 and older who were surveyed, nearly 99% indicated that they were happy with their lives, 97% liked who they were, and 96% liked how they looked.

Nearly 99% people with DS expressed love for their families, and 97% liked their brothers and sisters. A small percentage expressed sadness about their life.

Rebecca Taylor, writing about this research for Life News when it was first published in 2011, suggested that doctors should give the news of a Down Syndrome diagnosis with a smile saying, ‘There will be challenges but your child is nearly guaranteed to be a happy adult!’

In Britain, where abortion is permitted for fetal disability right up until birth, there were 3,968 Down’s syndrome babies aborted over the period 2002-2010 although the real number may actually be twice as high. Over 90% of all babies found to have Down’s syndrome before birth have their lives ended in this way.

One wonders what their parents were told (watch this video).

Fiona Bruce MP held a parliamentary inquiry into abortion for disability earlier this year, the findings of which were published in July.

One of its main conclusions was:

‘It should be best practice that parents are provided with practical and balanced information as soon as possible after discovery of a fetal disability and before leaving hospital so that they can make an informed choice. This should include leaflets or other information written by relevant disability groups. Parents should be offered contact with families with a child with a similar diagnosis without delay’

The quicker this recommendation is implemented the better.

There is no doubt that bringing up a child with special needs involves challenges, and yet at the very heart of the Christian gospel is the Lord Jesus who chose to lay down his life to meet our own ‘special needs’. The Apostle Paul tells us that Christ died for us ‘when we were powerless’ (Romans 5:6) and that ‘bearing one another's burdens’ is at the very heart of Christian morality (Galatians 6:1).


For Christian doctors bearing burdens involves not only providing the best medical care for the most vulnerable members of our society, but also supporting their families in the long haul, being prepared to speak out when they are being treated unjustly and doing what we can to oppose unjust and discriminatory legislation and health policy.

All of us are called in a whole variety of ways to engage in the fight for these very special people and others in a similar position of vulnerability. Let's pray that we fight these battles well.
Posted by Peter Saunders at 13:40