The growing mountain of US debt, graphically illustrated 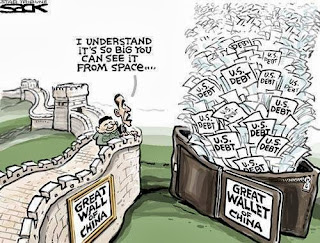 On a visit to Romania two years ago a Christian dentist explained to me how the world economic system worked.

'The average Chinese man earns $5 an hour and spends $4 an hour and lends the other dollar to the American.’

‘Because there are about five times as many Chinese men as Americans the sums work out pretty well.’

‘The only problem though is that both American and Chinese man are doing the same job and it is a global market.'

'So what will happen in time is that wages in America will come down and those in China will go up and when that happens there will be an awful lot of kicking and screaming in the US and possibly something even worse.’

I haven’t checked his sums but I thought his comments were rather insightful and the general gist is chillingly correct.

We all know that US debt is spiralling out of control, but all we get from the media is a moment by moment commentary but without the big picture.

So the Telegraph tells us today that Washington is due to hit its borrowing limit on 17 October, at which point the US government runs out of ‘extraordinary measures’ to raise new cash to pay its bills, risking an unprecedented default on US sovereign debt.

We are warned that markets are therefore braced for a choppy week because US politicians failed to strike an agreement on raising the debt ceiling over the weekend, leaving it just days away from hitting its $16.7 trillion (£10.3 trillion) borrowing limit.

Jim Yong Kim, President of the World Bank, on Saturday has warned that the US is just ‘five days away from a very dangerous moment’ unless politicians produce a plan to avoid default. 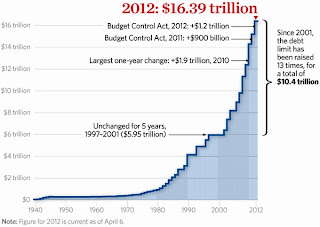 Christine Lagarde, President of the IMF, meanwhile repeated her warning that failure to raise the US borrowing limit would lead to ‘massive disruption the world over’.

But let’s put the daily headlines aside and look at the big picture.

By raising the debt ceiling even further the US will be moving even more into unprecedented debt. 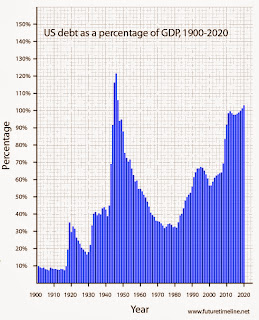 It also stands at around 100% of GDP, the highest level since the Second World War (see right).

So who is this debt owed to? (see below)

Over half of the debt is publicly owned within the US or is tied up in Social Security Trust Funds.
Over 30% is owed abroad with China (8%) and Japan (6%) being the biggest creditors.

When I was a boy my father taught me to live simply, give generously, save for future necessities and never to go into debt. It has served me well.

St Paul told the church in Rome to ‘Let no debt remain outstanding, except the continuing debt to love one another.’ (Romans 13:8)

Jesus was even more radical, ‘Give, and it will be given to you. A good measure, pressed down, shaken together and running over, will be poured into your lap. For with the measure you use, it will be measured to you.’ (Luke 6:38)

Why is it I wonder that the richest nation on earth is also the most indebted and lurching from one financial crisis to another?

I suspect the answer is found in another Bible book, ‘Human desires are like the world of the dead - there is always room for more.’ (Proverbs 27:20)

However high your income is, if your expenditure is greater you are heading eventually for a fiscal cliff without a happy landing.
Posted by Peter Saunders at 14:44