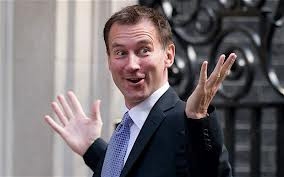 Health Secretary Jeremy Hunt (pictured) has come in for criticism today for saying that he believes the upper abortion limit should be lowered from 24 to 12 weeks.

Only two, George Osborne and Theresa Villiers, supported the status quo of 24 weeks and one, Michael Gove, was not present.

Of the five Liberal Democrat MPs in cabinet, four, including Deputy Prime Minister Nick Clegg, voted for the status quo and one, Vince Cable, abstained.

So overall only 6 of the 21 MPs in cabinet, less than one in three, voted for the status quo of 24 weeks.

In the last few days David Cameron, Theresa May and Maria Miller have indicated, like Jeremy Hunt, that their position on the issue in 2008 has not changed.

It seems as though this debate is still very much alive as the Conservative Party Conference begins.

Downing Street has however emphasised again today that any vote on abortion would be a matter of conscience.

I have previously outlined the case for lowering the upper limit to 20 weeks and 12 weeks respectively.

The full voting record for 2008 is as follows: