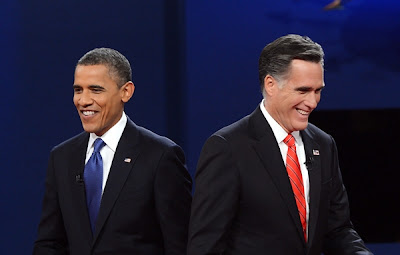 The Hastings Centre in Washington DC has run a useful comparison of Obama and Romney on a range of bioethics issues.

Some excerpts below on cloning, abortion, conscientious objection, contraception and stem cells:

“[W]e will ensure that our government never opens the door to the use of cloning for human reproduction. It is dangerous, profoundly wrong and has no place in our society, or any society.”

“During my time in office, I stood up to those who wanted to call into question the very definition of life. I vetoed a bill that would have opened the door to cloning and embryo farming.”

President Obama believes a woman’s health care choices are personal decisions, best made with her doctor—without interference from politicians. He continues to support a woman’s right to choose under Roe v. Wade.

“Mitt believes that life begins at conception and wishes that the laws of our nation reflected that view. But while the nation remains so divided, he believes that the right next step is for the Supreme Court to overturn Roe v. Wade…With Roe overturned, states will be empowered through the democratic process to determine their own abortion laws and not have them dictated by judicial mandate... Mitt supports the Hyde Amendment, which broadly bars the use of federal funds for abortions. As president, he will end federal funding for abortion advocates like Planned Parenthood.”

The Obama Administration’s Department of Health and Human Services has issued an Advanced Notice of Proposed Rulemaking that “guarantees women access to recommended preventive services including contraception without cost sharing, while ensuring that non-profit religious organizations are not forced to pay for, provide, or facilitate the provision of any contraceptive service they object to on religious grounds.”

“Romney opposes the January 2012 HHS rule requiring Catholic Hospitals, charities, and universities to purchase health insurance for their employees that includes coverage of contraception, abortifacents, and sterilization, in violation of their religious principles. He has vowed to waive this requirement in all 50 states, that he claims “compel religious institutions to violate the tenets of their own faith.”

“Today, with the Executive Order I am about to sign… we will lift the ban on federal funding for promising embryonic stem cell research. We will vigorously support scientists who pursue this research. And we will aim for America to lead the world in the discoveries it one day may yield…Medical miracles do not happen simply by accident. They result from painstaking and costly research – from years of lonely trial and error, much of which never bears fruit – and from a government willing to support that work… As a person of faith, I believe we are called to care for each other and work to ease human suffering. I believe we have been given the capacity and will to pursue this research – and the humanity and conscience to do so responsibly."

“Stem cell research is a great scientific frontier, and it must be pursued with respect and care. When confronted with the issue of stem cell research as governor of Massachusetts, Mitt Romney chose to support life by vetoing a bill that would have allowed the cloning of human embryos. Quite simply, America cannot condone or participate in the creation of human life when the sole purpose of its creation is its sure destruction. Adult stem cell research and alternative methods to derive pluripotent stem cells, such as altered nuclear transfer and direct reprogramming, are scientific paths that carry much promise and avoid raising ethical concerns. As president, Mitt will focus his energy on laws and policies that promote this kind of research to unlock the medical breakthroughs that our loved ones so desperately need."