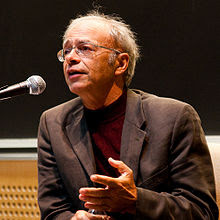 Peter Singer is an Australian moral philosopher and currently Professor of Bioethics at Princeton University. He is former editor of the Bioethics journal and one of the most influential thinkers in bioethics today.

Singer espouses utilitarianism, a system of ethics that seeks to minimize suffering and maximize wellbeing. The New Yorker has called him ‘the most influential living philosopher’.

One of the clearest expositions of Singer’s position, and interestingly the first thing I read of anything he wrote, is a seminal article titled ‘Sanctity of Life or Quality of Life?’, published in the American Journal ‘Paediatics’ in 1983. In it he argues as follows:

To Singer and many influential thinkers like him, man is nothing but the product of matter, chance and time in a godless universe; merely a highly specialised animal. The value of an individual human being is determined by his level of rationality, self-consciousness, physical attributes or capacity for relationships. Human life that has fewer of these qualities is of less value and can be disposed of.

This Darwinian ethic with its aim of 'survival of the fittest', once popularised and politicised, places the demented, mentally handicapped, brain-injured, unborn and disabled newborn in great danger.

Dave Andrusko, writing for Life Site News this week, reviews a blog that science writer John Horgan has written about Singer for the Scientific American after the latter paid a visit to Stevens Institute where Horgan is Director of the Center for Science Writing.

‘(Singer) has a knack for pushing people out of their moral comfort zone,’ Horgan writes. ‘Although his positions—especially on mercy killing of severely disabled infants and adults–have sparked public protests both in the US and abroad, (he) is disarmingly cool on the page and in person, even when talking about the hottest topics.’

Singer has tip-toed around some of his most infamous statements, but still adheres to the position that a child does not attain ‘full moral status’ until somewhere between one and two, which makes infanticide in some cases (actually many cases) acceptable.

To Singer the unborn is a member of the species Homo sapiens but not a ‘person’ because ‘the idea of a person involves the capacity to see oneself as existing over time’.

Says Horgan, ‘Singer nonetheless believes that abortion is ethical, because even a viable fetus is not a rational, self-aware person with desires and plans, which would be cut short by death; hence it should not have the same right as humans who have such qualities. Abortion is also justified, Singer added, both as a female right and as a method for curbing overpopulation’.

In his support for abortion as a means of controlling world population Singer is interestingly in good company with some notable Western politicians and policy-makers.

In 2009 Jonathon Porritt former chairman of the UK Government’s Sustainable Development Commission, said that curbing population growth through contraception and abortion must be at the heart of efforts to combat global warming, and that couples who had more than two children were irresponsible.

In the tradition of Malthus and Ehrlich, Porritt warned of ecological and environmental disaster ahead unless we do something rapidly to curb population growth (I have previously argued against this view here)

Former International development secretary (and until recently Chief Whip) Andrew Mitchell is another supporting abortion (subsumed within ‘family planning’) for population control. He argued recently in the Metro as follows:

‘The British government is working to improve access to contraception and family planning education for 10 million women in the developing world. This will prevent five million unintended pregnancies, save the lives of 50,000 women and avoid the deaths of 250,000 newborns by 2015.’

And the source of the information on which Mitchell based his policy? Well not surprisingly it is a report by the UN Population Fund (UNFPA), a key supporter of China’s population control programme, which is in large part responsible for 160 million missing women (as a result of sex selection abortion) in Asia.

Mitchell’s policy is consistent with a report by UN Special Rapporteur for Health, Anand Grover, which linked unrestricted abortion with the right to the highest attainable standard of physical and mental health. Grover adamantly affirmed his intention to redefine the ‘right to health’ in UN conventions and treaties to include abortion.

Peter Singer, like most philosophers, will never personally carry out his plans. To him they are just ideas. But ideas that are whispered in the ivory towers of universities in one generation get shouted in the streets in the next and become the basis of future public policy.

Let’s therefore keep a close eye on Singer and also, perhaps even more carefully, those policy makers who share his worldview and seek to put it into practice.