The demographic time bomb is most marked in Japan

The demographic time bomb – whereby the elderly population assumes a greater and greater proportion of the total population - is no more marked than in Japan.

Falling birth rates (as a result of abortion, contraception and delaying childbirth) and increasing longevity as a result of better medical care have created this situation.

If we look at the population age structure in Japan (see graph above) we can see how dramatically its shape has changed since 1950 and how much more it will change by 2050.

The same trends are spelt out numerically in the table below where different countries are compared.

The population pyramid of 1950 shows that Japan had a standard-shaped pyramid marked by a broad base. The shape of the pyramid, however, has changed dramatically as both the birth rate and death rate have declined.

They could well account for much less given that many of those in the 15-65 age group, as of now, might be in education, or alternatively not in education, employment or training.

The speed of aging of Japan's population is much faster than in advanced Western European countries or the USA but the trends are similar throughout the industrialised world.

Add in increasing debt and rising unemployment and you have a very toxic cocktail indeed.

Unless something is done to reverse the demographic trends, ‘economic necessity’, together with the ‘culture of death’ ideology which is becoming more openly accepted, may well mean that the generation that killed its children through abortion will in turn be killed by its own children through euthanasia.

Some European politicians and economists have been chillingly open about the economic incentives for euthanasia.

Jacques Attali, the former president of the European Bank for Reconstruction and Development, said in 1981 in an article in L’Avenir de la vie:

The real answer is not euthanasia. The real answer is in our grasp, but it requires a completely different mind-set to that which has led us, in our reckless pursuit of affluence and personal peace to mortgage our present, bankrupt our futures, and see those who rely on us as a burden rather than a privileged responsibility. 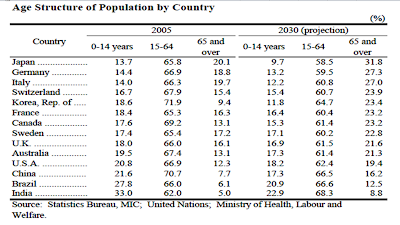 Data on Japan obtained from online ‘Statistical Handbook of Japan’