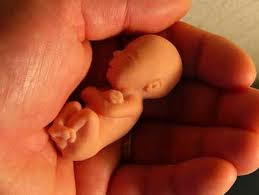 The front page of the Times this Saturday reports that Jeremy Hunt, the Health Secretary, supports lowering the upper limit for abortion from 24 to 12 weeks (12 week baby size pictured).

This was his position in 2008 when the issue was last put to the vote in Parliament.

In all , on that occasion, 71 MPs voted for a twelve week limit. The list of names can be found here and here.

Edward Leigh’s full speech in support of the 2008 amendment can be found here.

In my personal view, there is just one, overwhelming, fundamental human right: the right to life. I must confess that my views have changed over the years. If I am to be honest with myself, I have to take an entirely consistent position. If a vote were to be held on capital punishment, I would vote against it. That is why I voted against all the recent wars, and why I am voting as I am on the Bill. I believe that one can only take a consistent position based on humanity, with all its faults and disabilities. That is where I stand; I do not know any other way.

We sometimes feel that the ghosts of great parliamentarians are looking down on us in our great debates on the social issues of the day. The great-great-grandson of William Wilberforce said recently that he thought that if that great parliamentarian were here now, he would support us. Wilberforce fought against entrenched opposition, moneyed interests and a world view according to which some people were not fully human.

We believe that an unborn child of 12 weeks' gestation has undeniable human characteristics. Her organs, muscles and nerves have begun to function. She has fingernails and toenails. To become a child, she needs nothing more than to stay for a few months in the safety of her mother's womb. We must accept that in this instance we are dealing with a human life. If we cannot deny the humanity of babies at 12 weeks, we cannot deny our duty to protect them.

Only this week, I read a moving article by Vincent Argent, the former medical director of the British Pregnancy Advisory Service. He is not a religious person. He has carried out many abortions, and he is presumably pro-choice. He was critical of the euphemistic way we talk of foetuses when we discuss abortions, whereas when we refer to IVFwe talk of babies. He said:

"Most people do not realise just how distressing late abortions can be. The procedure remains the last taboo. While heart and brain surgery are regularly shown on television, the reality of a late abortion has never been seen on British screens...It is hard to describe how it feels to pull out parts of a baby, to see arms, and bits of leg, and finally the head."

There are double standards about the unborn child. Whatever one's views on abortions—I understand the strongly held views of many people who feel that they have to defend the rights of women to make a choice about something in their own body—surely everyone in the Chamber feels depressed about what is going on in Europe. It presents a bleak picture of our country that we have one of the highest abortion rates in Europe—200,000 a year. In modern Britain, the most dangerous place to be is in one's mother's womb, which should be a place of sanctity. Ninety-eight per cent. of abortions are social. Only 1.3 per cent. are because of foetal handicap and 0.4 per cent. are because of the risk to the mother's life. It is a bleak picture of modern Britain.

We read in our newspapers this week that some women have multiple abortions: 4,000 women have had four abortions, and scores have had eight. Is that the sort of Britain to be proud of? I know that I will not get the support of many people when I say this, but fewer abortions will mean fewer women suffering. It is pro-women to take the position that we take.

That is our principled stand. We have set it out, knowing that it is not shared by everybody, but it is the view of many of our fellow countrymen and country ladies, and that view must be put forward.

Why do I speak of 12 weeks? I know many hon. Members will be doubtful about voting for the motion. They will say that it represents an extreme point of view, but is it so extreme? The limit of 10 to 12 weeks applies in France, Portugal, Slovenia—although in Slovenia there is an appeal to a committee—Austria, Belgium. Bulgaria, the Czech Republic, Denmark, Estonia, Finland, Germany, Greece, Hungary, Italy, Luxembourg, Poland, Slovakia and Spain. In Romania the limit is 14 weeks, and in Sweden 18 weeks.

The 24-week limit applies only in the United Kingdom, Holland, Latvia, Lithuania and Cyprus. Do we want to be up there in that league? Germany, Austria and France are great countries with wonderful Parliaments and democracies. They debate these matters and, after mature debate, they have all taken the view that a limit of 10 or 12 weeks is about right.

Forty years ago the House was asked by a Member: "Would the sponsors of the Bill think it right to kill a baby they can see? Of course they would not. Why then do they think it right to kill one they cannot see?" Since 1990, despite what we were promised way back in 1966 and 1967, we have effectively had abortion on demand, certainly up to 18 or 20 weeks and, under the law, up to 24 weeks. But since 1990 we have learned so much more about what goes on in the womb. We can see babies walking and sucking their thumbs. I have seen that with my own six children.

Forty years ago, another right hon. Member made this telling statement: "When a decision about abortion is taken, the mother can speak, the doctor can speak, the father may well speak, but what can the child in the womb say? The child cannot speak. She cannot say, 'I want to live.'" I believe that we should give that silent child a voice.