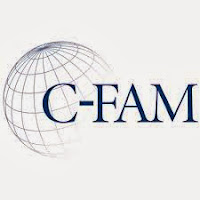 C-FAM (the Catholic and Family Human Rights Institute) exists to defend life and family at international institutions and to publicise the debate.

Its vision is to preserve international law by discrediting socially radical policies at the United Nations and other international institutions.

An essential part of C-FAM’s work is each week to publish the Friday Fax, prepared by C-FAM staff members who attend UN meetings and conferences as well as closely reading numerous UN documents.

The Friday Fax, now in its fourteenth year of uninterrupted publication, is read by over 400,000  subscribers and readers around the world.

These will be of interest to everyone with an interest in how pro-abortion factions are working at the highest international level to promote abortion throughout the world with the assistance of national governments and global corporate leaders.

I have included the links which provide further background information:

Abortion groups highly anticipate this global conference on women’s health. This year it featured clandestine abortionists, late term abortionists and pro-infanticide philosopher Peter Singer in a program that equated women’s health with contraception and abortion, but ignored some of the most basic needs of women. C-FAM staff attended Women Deliver exposing efforts to make abortion available where it is illegal using misoprostol, a drug that — even advocates admit — is more effective as an abortifacient than its stated purpose of stopping hemorrhaging. Melinda Gates was at the conference to promote the Gates Foundation family planning initiative, which supposedly had nothing to do with abortion. C-FAM has analyzed the premises of these policies.

As nations perform a 20-year review of population policies that include family planning and abortion, the agency in charge of the review has put abortion groups at the helm. They want countries to spend more money on policies that have an overall effect of reducing populations. Governments spent $60 billion last year on population policies that originated at the 1994 Cairo Conference on Population and Development. Recipients of that money include the United Nations Population Fund, International Planned Parenthood Federation, Marie Stopes International, Ipas, and groups that promote abortion, contraception and sterilization as a panacea for the world’s problems.

President Francois Hollande imposed homosexual marriage on France by seeking to silence opponents and rushing to a vote on the law. But the French people staged monumental demonstrations, bringing over 1 million people to the streets of Paris. Families with children, elderly men and women, and youth were beaten, tear gassed, and jailed – actions for which France was scolded by the Council of Europe and at the UN Human Rights Council in Geneva. This was not so for the Brits. In the United Kingdom marriage defenders were barely able to muster a whimper as their parliament voted on marriage for homosexuals.

The UN children’s agency (UNICEF) called on countries to recognize a right of children to confidential sexual and reproductive health services and information. They followed the lead of UN “experts” that monitor the Convention on the Rights of the Child. They say children must have confidential access to “safe abortion” and the morning after pill among other things. Though countries may ignore experts, they must pay attention to UN agencies and programs because they provide money and other forms of aid. Unfortunately, UNICEF has joined the ranks of those who hold sexual autonomy as the highest human rights norm.

5. UN Committee Says Abortion is a Right in Situations of War

The global abortion lobby’s latest effort is to manufacture a right to abortion for women who are victims of rape in situations of war. They were at UN headquarters during the annual Commission on the Status of Women in the Spring and again in the Summer to lobby the UN Security Council, albeit without success. The UN committee that monitors the UN’s women’s treaty gave abortion groups a lifeline when it issued a recommendation that abortion is a right in situations of conflict. The committee’s opinions have no real authority, but abortion groups and UN staff will tout them as authoritative to pressure governments to change their laws.