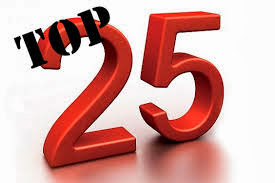 When I write a blog post I usually have no idea just how much (or how little) interest it will attract.

I am often surprised and especially by my top post of 2013 which has attracted almost 160,000 views and is still going strong.

During the year I posted 210 articles in total (including this one).

Two of the top five (1, 5) are testimonies while the other three (2, 3, 4) deal with apologetics issues and were deliberately written to attract atheists.

Whilst I write more on abortion and euthanasia than anything else these topics generally attract fewer views unless they deal with extreme cases (6, 8, 11, 19, 20).

Here are the top 25 ranked by the number of page views.

1. Do you know what happened to the girl in this iconic Pulitzer prize-winning photo from the Vietnam War? (159,088 views)

2. Ten things we can learn from the slaughter of the Amorites in the Old Testament (12,572)

Retweeted by Richard Dawkins bringing thousands of his loyal followers

Attracted thousands of atheists looking for arguments to defend their position

4. Why Christians may eat shellfish but may not have sex outside marriage (8,341)

A favourite question from the new atheists

6. Defending the ‘indefensible’? Twenty reasons to think twice about aborting a baby with anencephaly (4,905)

7. Margaret Thatcher recognises the wisdom and goodness of Jesus Christ (4,828)

8. Stephen Hawking is a great scientist but his advice on decriminalising assisted suicide should be given short shrift (4,624)

Celebrities are used to endorse legalisation

9. Why many British evangelicals are not that bothered with ethics (4,554)

An excerpt from my Christian Institute autumn lecture

Steve Chalke’s disclosure of his views in Christianity magazine

The grisly tale of Gosnell

13. The Archbishop’s speech on gay marriage – needless concessions and a lost opportunity (3,768)

15. Would giving royal assent to the Marriage (Same Sex Couples) Bill place the queen in breach of her coronation oath? (3,446)

But she signed it anyway!

The testimony which provoked outrage amongst the politically correct

18. What causes homosexuality Peter Tatchell? Well it depends on which view is most politically convenient at the time (3,219)

19. Eight facts most people don’t know about the physical and psychological consequences of abortion for women (3,213)

20. US House of Representatives vote for 20 week abortion limit raises the issue again for the UK (2,973)

A big issue on both sides of the Atlantic

21. Gay partnerships – how far should we go in tolerating ‘evangelicals’ who endorse them? (2,969)

Controversial within the church

But it wasn’t enough!

The disease that dare not speak its name

24. Parents should be informed about the impact of Down’s Syndrome on families (2,419)

The man behind the RCPsych’s opposition to change therapies
Posted by Peter Saunders at 10:29