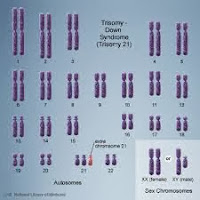 If you have Down’s syndrome and your mother lives in Ireland then your chances of making it to birth are considerably greater than if you have the misfortune to be conceived in England or Wales.

Furthermore the Irish birth rate for Down’s syndrome babies is about twice that for England and Wales.

The way these figures are derived is explained below. The calculations are not simple as many babies with all these conditions are not diagnosed until after birth.

Some of the most common congenital abnormalities accounting for abortions in England and Wales are ‘trisomies’, in which there are three copies of one particular chromosome rather than two.

The most common trisomies are Down's syndrome (trisomy 21), Edwards’ syndrome (18) and Patau syndrome (13). People with DS now have an average life expectancy of between 50 and 60 but those with ES and PS will all die in early childhood.

The National Down Syndrome Cytogenetic Register (NDSCR) was set up on 1 January 1989 and holds anonymous data from all clinical cytogenetic laboratories in England and Wales of cases of DS, ES and PS diagnosed before or after birth.

Its 2011 annual report was published in February 2013 and is available here.

In the same year there were an estimated 725 babies born with Down’s syndrome accounting for approximately 1 in 1,000 live births.

How do these numbers compare with Ireland where abortion for fetal disability is currently illegal?

We know from Department of Health Statistics that 4,149 women with Irish addresses had abortions in Britain in 2011 as against 189,000 abortions that year involving women from England and Wales.

1. Babies with DS, ES and PS are conceived with same frequency in Ireland, England and Wales (not unreasonable unless mothers are much older and therefore risk higher in England).

2. Babies with DS, ES and PS are diagnosed with the same frequency in Ireland, England and Wales (reasonable given the similar technology).

3. No abortions for any of these conditions take place in Ireland (as it is illegal).

4. All abortions on Irish babies with these conditions take place in England and Wales (as this is their nearest legal port of call).

5. The Department of Health statistics for abortions on babies with DS, ES and PS are accurate (although see comparison with NDSCR figures here).

If abortions on Irish babies with DS, ES and OS were occurring at the same rates as English and Welsh babies with these conditions we would expect not 10, 5 and 3 abortions per year (for DS, ES and PS) but rather 76, 30 and 11 (figures obtained by multiplying E/W figures of 931, 370 and 139 above by 4.6 and dividing by 56 to correct for population).

There are currently 60,000 people living with Down’s syndrome in England and Wales and 5,000 in Ireland – roughly similar if we correct for population size.

But whereas 120 babies are born with Down’s syndrome in Ireland every year the equivalent figure for England and Wales is 725 – about half the corrected Irish birth numbers of 1,460.


Discussion of the results and the derivation of the numbers is most welcome.
Posted by Peter Saunders at 09:20