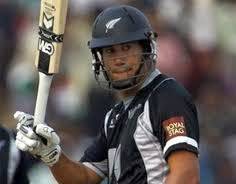 Kiwi cricketer Ross Taylor could make history today as he takes the field for the final day of the third test against West Indies.

The Black Caps bowled out the West Indies for 103 in their second innings in Hamilton yesterday and now just need 116 further runs to complete a 2-0 series win. They are currently 6 without loss.

Yesterday Taylor completed his third consecutive Test century making 131 to lead the Black Caps to 349 all out.

In so doing he became the first New Zealand batsman to score a century in all three Tests of a three Test series (217, 129 and 131).

Taylor is now just 20 runs short of breaking the New Zealand record of most runs in a three match series, which was achieved by Andrew Jones when he scored 513 against Sri Lanka in 1990/91.

The 29-year-old is also just seven runs shy of breaking the record for the most runs by a New Zealander in a calendar year - which was accomplished by John Reid when he scored 871 in 1965. But Reid's tally though took three Tests and eight innings more than Taylor.

Taylor, who yesterday scored his 11th Test ton, is averaging an incredible 246.5 for this series and 72 for 2013 with one innings almost certainly to come. So a series average of 250 is not beyond the realms of possibility.

His total runs for the year also put him fourth in the international rankings behind only Michael Clarke, Ian Bell and David Warner. But he has achieved this in just 16 innings, at least six fewer than any of these three.

Taylor has now scored over 4,000 runs in tests including eleven hundreds and has a test average of 46.52. He also has eight hundreds in ODIs and 16 in first class matches.

New Zealand cricket badly needs something to crow about despite our great ability to look on the bright side.

Luteru Ross Poutoa Lote Taylor (his full name) was born in Lower Hutt, Wellington, in 1984 and is also only the second Kiwi international cricketer of Samoan descent.
Posted by Peter Saunders at 11:47