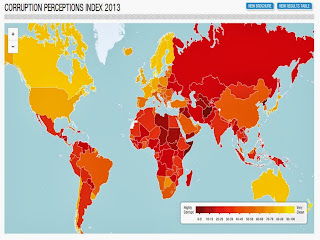 
New Zealand may not have a very good cricket team but in addition to the world rugby rankings there is another ladder on which it is consistently on the highest few rungs – and quite often top.

Yes New Zealand is one of the least corrupt countries in the world!

Since 1995, Transparency International (TI) has published the Corruption Perceptions Index (CPI) annually ranking countries ‘by their perceived levels of corruption, as determined by expert assessments and opinion surveys.’

The CPI generally defines corruption as ‘the misuse of public power for private benefit’.

The CPI currently ranks 176 countries ‘on a scale from 100 (very clean) to 0 (highly corrupt).’ The 2013 ranking is here and illustrated above. The more yellow the less corrupt; the more red the more corrupt.

Well, now that I have taken the opportunity to plug New Zealand, it so happens that today is International Anti-Corruption Day and there is a chance to put your signature to a petition against corruption. It only takes a minute.

The campaign is being run by Micah Challenge and I have pasted the letter from director Joel Edwards below.

Today is International Anti-Corruption Day and a chance for Christians around the world to shine a light on the scourge of corruption. Jesus came into a world of greed and corruption to turn it upside down - and I believe he wants the Church to do the same.

The reality is that today over 1 billion people live on the edge of survival with poor sanitation, no healthcare and little chance of education. There are many causes for poverty but the single greatest obstacle to overcoming this crippling poverty is corruption.

Every day well over $3 billion goes missing from the global economy - stolen through bribes, money laundering, tax evasion and other illegal payments in business and government. Money lost through bribery alone adds up to $1 trillion in a year [1]. This affects us all but it’s the world's poorest who suffer most. This is more than just a depressing statistic; it's devastating. Corruption kills. A recent report from Christian Aid estimates that if we addressed illegal corporate tax evasion we could save the lives of 230 children under the age of 5 every single day [2].

That's why we at Micah Challenge are part of EXPOSED, which we believe to be the first ever global campaign by Christians to stand for integrity and honesty in financial dealings in business, government and church. Corruption leads to injustice and broken relationships, while the Bible calls us to restore relationships with each other and with God.

Today I'd like to ask that you join us in calling on the leaders of the world’s powerful nations (the G20) to step up efforts to combat bribery and tax avoidance. Governments are already considering anti-corruption measures and we can encourage them to ensure tighter systems are in place to plug the holes in financial flows, making it harder for corrupt practices to flourish.

We really need your voice to help shine a light on corruption and protect the poorest in our world.

For many Christians around the world speaking out against corruption is not a safe option - Pope Francis himself was named a mafia target after making a strident assault on corruption and bribery during a recent Monday morning mass. But there are positive signs of hope. As Joyce Thong who heads up the Malaysian EXPOSED programme reported: ‘It is risky to speak out, and the problem of corruption is overwhelming but I have never seen the Church so receptive, so ready to act.’

The more we join together in speaking out to governments, the greater the impact we have. We need 50,000 signatures on our global petition by Christmas and are aiming for a million by June next year as we prepare to hand over our petition with a whole host of churches and NGOs. Please join your light and stand with thousands of others around the world. It only takes a minute to sign the petition, but your voice is important.