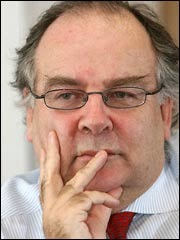 Lord Falconer’s Assisted Dying Bill, due for a second reading in the House of Lords on 18 July, is purportedly based on the US state of Oregon’s Death with Dignity Act (DWDA).

Dignity in Dying, the former Voluntary Euthanasia Society, who are backing Falconer, claim that everything is wonderful in Oregon. But is that really true?

In fact, far from being reassuring, the Oregon experience sounds a loud warning to the UK not to follow suit.

On 27 October 1997, Oregon enacted the DWDA which allows terminally-ill Oregonians to end their lives through the voluntary self-administration of lethal drugs, expressly prescribed by a physician for that purpose.

The Oregon DWDA also requires the Oregon Health Authority to collect information about the patients and physicians who participate in the Act, and publish an annual statistical report.

These annual reports are all available on the Oregon government website and there is plenty of other relevant information in the public domain to draw on.

In order to qualify under the Oregon Act, a patient must be an Oregon resident, 18 years of age or older, capable of making and communicating health care decisions for him/herself and have been diagnosed with a terminal illness that will lead to death within six months.

It is up to the attending physician to determine whether these criteria have been met.

A similar law came into effect in the neighbouring state of Washington in 2009. Annual reports can be accessed here.

So what can we learn about the Oregon/Washington model? Here are ten disturbing facts:

1. There has been a steady increase in annual numbers of people undergoing assisted suicide in Oregon 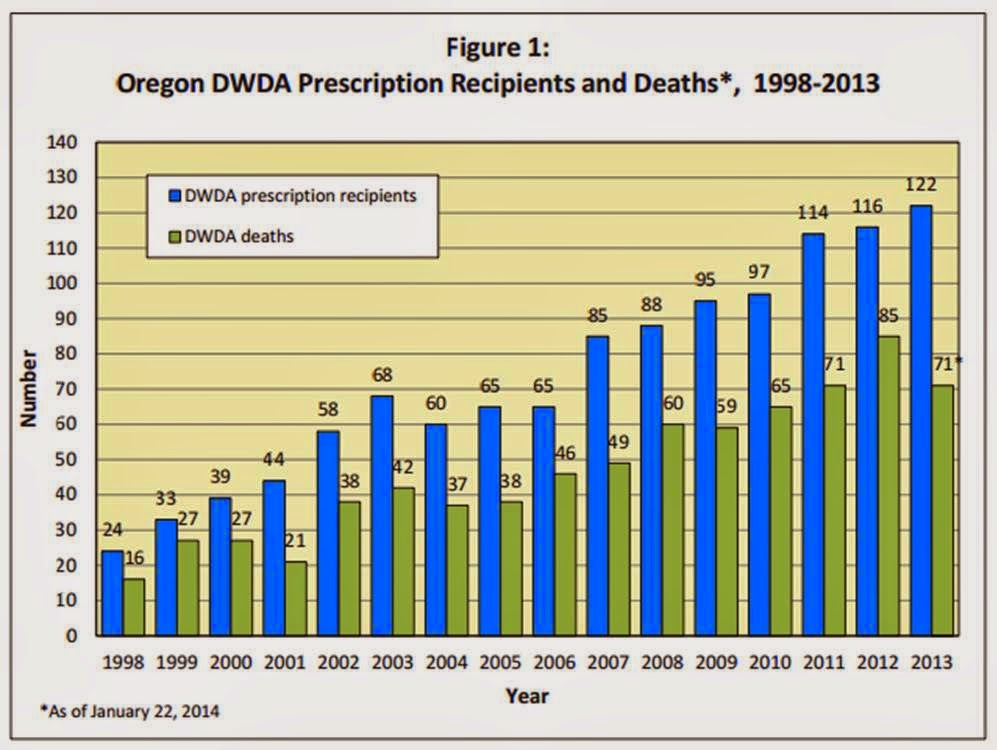 2. The Oregon health department is funding assisted suicide but not treatment for some cancer patients

Barbara Wagner had recurrent lung cancer and Randy Stroup had prostate cancer. Both were on Medicaid, the state’s health insurance plan for the poor that, like some NHS services, is rationed. The state denied both treatment, but told them it would pay for their assisted suicide! ‘It dropped my chin to the floor,’ Stroup told the media. ‘[How could they] not pay for medication that would help my life, and yet offer to pay to end my life?’ (Wagner eventually received free medication from the drug manufacturer. She has since died. The denial of chemotherapy to Stroup was reversed on appeal after his story hit the media.)

Despite Wagner and Stroup's cases, advocates continue to insist that Oregon proves assisted suicide can be legalised with no abuses. But the more one learns about the actual experience, the shakier such assurances become.

If AS were to be legalised in the UK end-of-life care would be likely to worsen under financial pressures because it costs on average £3000 to £4000 a week to provide in-patient hospice care, but just a one-off cost of £5 to pay for the drugs which would help them commit suicide. Cancer treatments like chemotherapy, radiotherapy or surgery cost much more. Do we really wish to place that temptation before families, NHS managers and Health Secretaries in cash-strapped Britain?

3. Patients are living for many years after having been prescribed lethal drugs for ‘terminal illness’ showing that the eligibility criteria are being stretched

The Oregon and Washington laws, like Falconer’s proposed law, have ‘six months to live’ criteria. But doctors’ estimates of lifespans can be wildly out. Consider Oregon resident, Jeanette Hall, who was diagnosed with cancer and decided to ‘do’ Oregon's law. Her doctor, Kenneth Stevens, didn't believe in assisted suicide and encouraged her to be treated instead. It is now 14 years later and she is ‘thrilled’ to be alive. This is Dr Steven's affidavit filed by the Canadian government in Leblanc v. Canada, now dismissed, discussing Jeanette. This is Jeanette's affidavit, also filed by the Canadian government in the same case.

The Oregon statistics record patients killing themselves up to 1,009 days after the first request for lethal drugs – almost three years – showing just how hard doctors are pushing the boundaries - and/or how bad they are at guessing lifespans.

4. The vast majority of those choosing to kill themselves are doing so for existential reasons rather than on the basis of real medical symptoms

The main argument advanced for assisted suicide is unremitting pain. But the Oregon data show that those people citing ‘inadequate pain control or (even) concern about it’ constitute just 23.7% of cases overall. So what are the main reasons given for taking one’s life? In 2013 93% cited ‘loss of autonomy’, 89% said they were ‘less able to engage in activities making life enjoyable’ and 73% listed ‘loss of dignity’. These are not physical but existential symptoms.  But should lethal drugs be prescribed to people who feel their lives no longer have meaning and purpose?

The fact that almost a quarter of patients dying under the Act report inadequate pain control or concerns about pain also shows that palliative care provision in Oregon is unsatisfactory. But surely this is an argument for better care rather than AS.

5. Many people in Washington and Oregon give ‘fear of being a burden on others’ as a reason for ending their lives

I have frequently argued that any change in the law to allow assisted suicide or euthanasia would place pressure on vulnerable people to end their lives for fear of being a financial, emotional or care burden upon others. This would especially affect people who are disabled, elderly, sick or depressed and would be most acutely felt at a time of economic recession when many families are struggling to make ends meet.

This fear is again borne out by the American data. In Washington in 2013, 61% of people opting for assisted suicide give the fear of being a burden to family, relatives and caregivers as a key reason. 13% cited ‘financial implications of treatment’. In the same year in Oregon the equivalent figures were 49% and 6%.

6. Fewer than three per cent of patients are being referred for formal psychiatric or psychological evaluation

In an article for The Telegraph, former president of the Royal College of Psychiatrists Baroness Sheila Hollins has voiced concern that proposals to license doctors to supply lethal drugs to mentally competent, terminally ill patients fail to take account of the complex process involved in assessing a patient's mental capacity. According to Baroness Hollins, assessing mental capacity ‘isn't like checking the oil or water level in a car’ or ‘the sort of thing that can be done in a single consultation, especially if the decision in question - as it is in this case - is one with life-or-death consequences.’

Commenting on the US State of Oregon, where less than 3% of cases were referred for a formal psychiatric assessment in 2013 she writes: ‘Researchers have found that some patients who have ended their lives under the terms of Oregon's assisted suicide law had been suffering from clinical depression. Depression impairs decision-making capacity, it is common in elderly people and it is treatable. But in some cases in Oregon it has not been diagnosed by the doctor who assessed the patient's capacity and prescribed lethal drugs. Oregon's law requires referral for psychiatric examination in cases of doubt but in some cases that has not happened.’

7. A substantial number of patients dying under the Oregon Act do not have terminal illnesses

In Oregon in 2013 16.9% of those killing themselves under the Act did not have cancer, heart disease, chronic lung disease or motor neurone disease but were classified as having ‘other illnesses’. What were these? A footnote in the annual report tells us that this ‘includes deaths due to benign and uncertain neoplasms, other respiratory diseases, diseases of the nervous system (including multiple sclerosis, Parkinson's disease and Huntington's disease), musculoskeletal and connective tissue diseases, viral hepatitis, diabetes mellitus, cerebrovascular disease, and alcoholic liver disease.’

Many of these conditions might be considered life-shortening but it beggars belief that all these cases were terminal (with less than six months to live). These are in the main chronic conditions, again falling outside the bounds of the Act.  And yet the doctors went ahead and signed the forms anyway – further evidence of how medical practitioners cannot be trusted to keep to the legal boundaries.

8. It is virtually certain that there is underreporting of assisted suicide cases in Oregon

The Lancet recently published a long awaited meta-analysis study which indicated that in 2010 in the Netherlands, 23% of all euthanasia deaths were not reported.  Could similar under-reporting be happening in Oregon? It is a virtual certainty.

So with an Oregon-type law like Falconer’s we can expect to see steadily increasing numbers of assisted suicide cases year on year in England and Wales, along with an unknown level of under-reporting.

9. Some doctors know the patient for less than a week before prescribing the lethal drugs

In order to assess whether a patient is being coerced or not, it surely must be necessary for the prescribing doctor to know them personally and understand their family situation. But in Oregon there were patients who knew their doctor for less than a week before he/she prescribed them the lethal drugs – further evidence of doctor shopping.

10. The presence of no independent witnesses in over 80% of cases is a recipe for elder abuse

In Oregon in 2013 there was no doctor or other healthcare professional present at the time of ingestion of the lethal drugs in 81% of cases. Also the duration of time that elapsed between the request for the drugs and the actual death ranged from 15 to 692 days with a median of 52 days.

During this time the drugs were kept at the patient’s home. But without an independent witness how can we be sure that the drugs were taken voluntarily and not administered forcefully or secretly by a relative with an interest financial or otherwise, in the patient’s death? If they struggled who would know? And any investigation into possible foul play would have to traverse the substantial hurdle of the key witness (the patient) being dead.

We know that in Britain, according to ‘Action on Elder Abuse’, there are half a million cases of elder abuse annually, many of which involve financial abuse by family members or close relatives. The Oregon law, and by implication Falconer’s proposed law, is a recipe for elder abuse of the very worst kind – killing for money.


The lessons from Oregon are clear. We should not go there. Keep Britain safe for vulnerable people.
Posted by Peter Saunders at 17:11