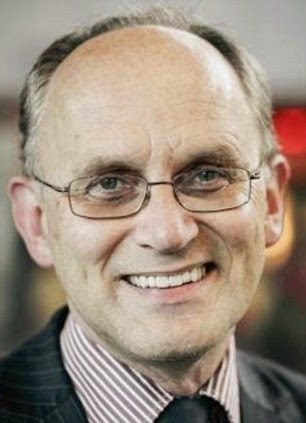 Professor Theo Boer (pictured) is a Dutch ethicist who was featured in by the Daily Mail last week for changing his mind on assisted suicide.

He later agreed to send the original article that he had sent to the Daily Mail (who only quoted from it) to Alex Schadenberg, International Chair of the Euthanasia Prevention Coalition.

The article is reproduced here, with permission, from Alex’s blog.

In 2001 The Netherlands was the first country in the world to legalize euthanasia and, along with it, assisted suicide. Various safeguards were put in place to show who should qualify and doctors acting in accordance with these safeguards would not be prosecuted.

Because each case is unique, five regional review committees were installed to assess every case and to decide whether it complied with the law. For five years after the law became effective, such physician-induced deaths remained level - and even fell in some years. In 2007 I wrote that ‘there doesn’t need to be a slippery slope when it comes to euthanasia. A good euthanasia law, in combination with the euthanasia review procedure, provides the warrants for a stable and relatively low number of euthanasia.’ Most of my colleagues drew the same conclusion. 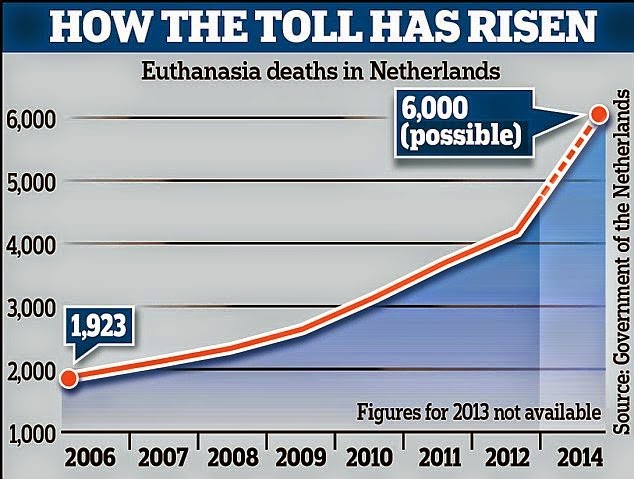 But we were wrong - terribly wrong, in fact. In hindsight, the stabilization in the numbers was just a temporary pause. Beginning in 2008, the numbers of these deaths show an increase of 15% annually, year after year. The annual report of the committees for 2012 recorded 4,188 cases in 2012 (compared with 1,882 in 2002). 2013 saw a continuation of this trend and I expect the 6,000 line to be crossed this year or the next. Euthanasia is on the way to become a ‘default’ mode of dying for cancer patients.

Alongside this escalation other developments have taken place. Under the name ‘End of Life Clinic,’ the Dutch Right to Die Society NVVE founded a network of travelling euthanizing doctors. Whereas the law presupposes (but does not require) an established doctor-patient relationship, in which death might be the end of a period of treatment and interaction, doctors of the End of Life Clinic have only two options: administer life-ending drugs or sending the patient away. On average, these physicians see a patient three times before administering drugs to end their life. Hundreds of cases were conducted by the End of Life Clinic. The NVVE shows no signs of being satisfied even with these developments. They will not rest until a lethal pill is made available to anyone over 70 years who wishes to die. Some slopes truly are slippery.

Other developments include a shift in the type of patients who receive these treatments. Whereas in the first years after 2002 hardly any patients with psychiatric illnesses or dementia appear in reports, these numbers are now sharply on the rise. Cases have been reported in which a large part of the suffering of those given euthanasia or assisted suicide consisted in being aged, lonely or bereaved. Some of these patients could have lived for years or decades.

Whereas the law sees assisted suicide and euthanasia as an exception, public opinion is shifting towards considering them rights, with corresponding duties on doctors to act. A law that is now in the making obliges doctors who refuse to administer euthanasia to refer their patients to a ‘willing’ colleague. Pressure on doctors to conform to patients’ (or in some cases relatives’) wishes can be intense. Pressure from relatives, in combination with a patient’s concern for the wellbeing of his beloved, is in some cases an important factor behind a euthanasia request. Not even the Review Committees, despite hard and conscientious work, have been able to halt these developments.

I used to be a supporter of legislation. But now, with twelve years of experience, I take a different view. At the very least, wait for an honest and intellectually satisfying analysis of the reasons behind the explosive increase in the numbers. Is it because the law should have had better safeguards? Or is it because the mere existence of such a law is an invitation to see assisted suicide and euthanasia as a normality instead of a last resort? Before those questions are answered, don’t go there. Once the genie is out of the bottle, it is not likely to ever go back in again.

Theo Boer is professor of ethics at the Protestant Theological University at Groningen. For nine years, he was a Member of a Regional Review Committee. For the Dutch Government, five such committees assess whether a euthanasia case was conducted in accordance with the Law. The views expressed here represent his views as a professional ethicist, not of any institution.