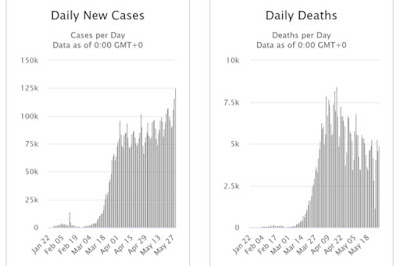 Last week I was on a conference call with 35 Christian doctors and dentists in our East Asia network. We reviewed the status of the COVID-19 pandemic in each country. The figures are really illuminating.

But even these latter numbers are tiny when considered on a population basis. China has had 3 deaths per million people, Japan 7 and South Korea 5.

By contrast the UK has had over 38,000 deaths – equivalent to 566 for every million people. This is a hundred times the number of deaths per million in South Korea and over 1,000 times that in Hong Kong.

Overall, the US and Europe have been the worst in handling this pandemic thus far. If we disregard those countries with tiny populations less than 200,000 people (St Maartens, Andorra, San Marino, Isle of Man and Channel Islands) the ten countries with the highest covid deaths per million population are all European or North American.

It is now simply impossible to ignore the conclusion that the Far East along with New Zealand and Australia - which have both had only 4 deaths per million population – have handled this crisis far, far better than the Old World.

What did the successful countries do?

First, they acted quickly, immediately closing their borders, quarantining every suspected case and tracing and testing every contact. They knew exactly how many cases they had in the country and where they were. They identified case clusters and wrestled them to the ground.

Lockdown, along with handwashing and social distancing, helped to limit the spread, but it was the early closing of borders, quarantine and test and trace that contained the virus.

Hong Kong and Taiwan immediately closed their borders because of their past experience with SARS. New Zealand and Australia rapidly followed suit. By contrast official Home Office figures reveal that at least 20,000 people infected with coronavirus entered the UK before lockdown, but fewer than 300 were quarantined. These arrivals would have infected some 50,000 more people given the World Health Organisation’s assessment of an average transmission rate at the start of March of between 2 and 2.5.

Between 1 January and the end of March 18.1 million people entered the UK without any health checks including from coronavirus hotspot countries. Of these, just 273 were quarantined.

Subsequently 15,000 to 20,000 people a day returned to the UK up to the end of April without being subject to the enforced quarantine that had operated in successful countries virtually from day one.

China got quickly on top of their outbreak through a vigorous programme of widespread testing followed by isolation of those affected, backed up by travel restrictions. In Wuhan, where the pandemic started, more than 1,800 teams of epidemiologists, with a minimum of 5 people/team, traced tens of thousands of contacts a day. New Zealand similarly tracked down every single case such that by 30 May there was only one active case left in the country.

Compare this with the UK where testing was abandoned in early March because the number of cases had overwhelmed our meagre testing facilities. With a doubling time of three days the number of cases in the country is estimated to have increased from 11,000 to 1.5 million in the 20 days between 3 and 23 March while the government dithered and talked about ‘herd immunity’ and handwashing.

Second, successful countries protected their vulnerable populations. New Zealand’s total of 22 deaths occurred mainly in two care homes; yes remarkably the disease got into only two care homes. By contrast on 12 May it was reported that more than 8,300 deaths in UK care homes had been linked to the virus since the epidemic started.

We now know that this was because suspected cases in many UK care homes were not even tested, staff were not supplied with PPE and hundreds of people were discharged from hospitals into care homes taking the virus with them. And so British care homes became incubators for COVID-19.

Third, successful countries employed sensible exit strategies. Lockdown measures were not relaxed until the disease had been virtually eliminated and test and trace techniques were sufficient to locate and isolate those few cases which remained.

Again, by contrast, lockdown measures have been lifted when there are still ten of thousands of active cases in European countries including the UK. According to John Edmunds, a professor of infectious disease modelling at the London School of Hygiene and Tropical Medicine, there are still 8,000 new infections every day in England without counting those in hospitals and care homes.

Given that in many people the infection lasts for three weeks (say 20 days) that would mean over 160,000 active cases in the UK at any one time. In China the epidemic peaked at 3,000 cases a day (see p29 here) so we are still over double the number of new cases per day at China’s peak in a country with less than 5% of China’s population.

Test and trace strategies worked in China and New Zealand with hundreds of active cases – but the manpower and organisation required to make them work with over 100,000 active cases in the UK are much higher and our test and trace workforce is not even yet up and running.

Remember that the UK’s coronavirus cases went from 11,000 to 1.5 million in 20 days between 3 and 23 March this year. We are still at the equivalent of 15 March even now. Understandably several advisors of the Sage committee have expressed concern that we are taking our foot off the brake too early and risking a second spike in cases.

In other words, 95% of the Spanish population and 93% of the British population are still susceptible to coronavirus infection, at a time when we still have no treatment and no vaccine.

And yet according to official figures there have already been 38,000 deaths in the UK and 27,000 in Spain. If the whole population of both countries were to be infected these figures could rise as much as 15 to 20 times. And as these figures only include those cases proven by test to have the virus the real numbers could be considerably higher.

This has led Mark Woolhouse, a professor of infectious disease epidemiology at the University of Edinburgh, to suggest that intensive surveillance, large-scale screening, effective contact tracing, isolation of cases, quarantine for international arrivals and some residual physical distancing ‘is a possible new normal’.

It is perhaps easy to be wise in retrospect, but for many countries in the developed world this crisis is far from over. Lockdown has flattened the curve but prolonged the agony and we may only have witnessed the first act of a very long play.

But the lessons are clear – the trajectory of COVID-19 in any given country is largely a product of how that country handles it. Some countries have done incredibly well – and others incredibly badly.

The important thing is that we learn the lessons for next time. We can be thankful that COVID-19 is only moderately infectious and carries an overall mortality rate of only about 1%. Imagine if it was as lethal as Ebola and as easy to catch as chicken pox. Or perhaps try not to imagine.