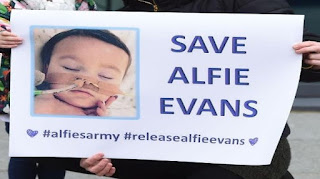 Hear my Premier Radio interview on this case here .Alfie died at 0230 on Saturday 28 April, just over 24 hours after this post was written.

Alfie Evans was admitted to Alder Hey Hospital, Liverpool in December 2016 suffering from seizures. He was found to have a (still undiagnosed) progressive neurodegenerative disease and has now been in a semi-vegetative state for more than a year. During that time, he has been on a ventilator in the critical care unit.

Alder Hey NHS Trust went to the High Court last year to seek a declaration that continued ventilator support was not in Alfie’s ‘best interests’. They claimed that scans showed ‘catastrophic degradation of his brain tissue’ and that further treatment was not only ‘futile’ but also ‘unkind and inhumane’.

But his parents disagreed and wanted permission to fly him to the Bambino Gesu Hospital in Rome in the hope of prolonging his life.

On 20 February, High Court Judge Mr Justice Hayden said doctors could stop providing life support for Alfie against his parents' wishes, saying the toddler required ‘peace, quiet and privacy’. A lengthy legal battle ensued with the eventual result that Alfie was taken off the ventilator on Monday 23 April.

At the time of writing, over 60 hours later, he is still alive breathing spontaneously on oxygen.

The Italian Ministry of Foreign Affairs had previously granted 23-month-old Alfie Italian citizenship, hoping it would allow an ‘immediate transfer to Italy’ but Hayden, who stated that ‘Alfie is a British citizen’ and ‘falls therefore under the jurisdiction of the High Court’, ruled that he could not go. This judgement was upheld on 25 April by three judges at the Court of Appeal.

The case has understandably generated international media interest, intense emotion and accusations on both sides with the medical staff, judiciary, Alfie's parents and supporters and his legal team all coming in for criticism from various quarters.

Everyone has an opinion, which makes me all the more reluctant to offer mine. I do so now only because I have spent much of yesterday refusing requests to go on adversarial media debates but at the same time having to answer questions from church members, CMF members, leaders of other organisations all over Europe and concerned members of the public who are wanting to know what to think and are deeply concerned about the tone of public discussions. Some of this criticism on both sides, from both media and public, has been particularly vicious and is to my mind inexcusable in what is a deeply complex and difficult case.

In doing so my heart first goes out in particular to Alfie's parents and the medical staff who have cared for him for so long to the best of their ability under the glare of the media spotlight.

I think there are two key questions with this case  – ‘What is the best way of managing Alfie?’ and ‘Who should ultimately decide what treatment he has?’

They need to be considered separately.

‘What is the best way of managing Alfie?

Alfie has incurable progressive brain damage which will eventually kill him. So, any treatment is only going to be supportive or palliative at best. However, it is not immediately apparent how long he might live either on, or off, a ventilator.

There is an important ethical difference between the active ending of life and the withdrawal of treatment. The former, I believe, is always wrong, whereas the latter is sometimes wrong and sometimes right depending on the clinical circumstances.

It is not always wrong to withdraw or withhold treatment. Sometimes, when death is imminent and inevitable and the burden of the treatment outweighs any benefit it gives, it can be good medicine.

There is a point when we say enough is enough. Similarly, we are not obliged to give every treatment to every patient just because those treatments exist. Doctors are making decisions to withhold or withdraw treatments of various kinds every day.

But these decisions must be made on grounds that the treatment is not worth giving, not that the patient is not worth treating – that the treatment is futile, or that it does more harm than good, rather than that the life is futile. Doctors are obliged to make judgements about the qualities of treatments, but not about the quality of lives. It is therefore sometimes appropriate and ethically defensible to turn off a ventilator in some cases of severe brain damage, just as it is appropriate in other situations to withdraw or withhold drug treatments or surgery.

But, when invasive treatments like ventilators are withheld or withdrawn, basic care including food and fluids (clinically assisted nutrition and hydration), oxygen and symptom relief should continue as it has with Alfie. The fact that Alfie is still breathing after almost 72 hours does not mean that his brain is not severely damaged, only that there is enough function in his brain stem (the respiratory centre) for him to continue the unconscious process of breathing. It does not mean that he is beginning a miraculous recovery, only that his brain stem is currently less badly damaged than his doctors thought.

I am not here making a judgement about whether it was clinically appropriate to stop Alfie’s ventilator as I am not privy to the full clinical details, but Alfie’s doctors clearly felt that it was and made this decision in good faith believing that Alfie was suffering and that the ventilation was providing more burden than benefit.

Other doctors might, and indeed have, disagreed with this conclusion, which tells us at very least that it is not a straightforward assessment.  Personally, I don't share the view of the court that to keep Alfie on a ventilator is inhumane. If he is deeply unconscious and effectively insensate, then he will not by definition be suffering. On the other hand, the ventilator appears to be simply extending his life rather than improving his underlying brain damage, which is getting steadily worse.

Who should ultimately decide what treatment Alfie has?

One of the dilemmas Alfie's case has raised is whether doctors or judges are the right people to determine whether withdrawing life-support treatment is in the ‘best interests’ of a terminally ill child. Should they be able to overrule parents?

Under UK law the rights of parents are not absolute. The 1989 Children's Act makes it clear that where a child is at risk of harm the state can and should intervene and the court in this case chose to overrule the parents.

It is this that has fuelled the greatest resentment and criticism.

I am not saying that ventilating Alfie was helping him (in terms of improving his condition) but equally I find it hard to see how it was harming him. His doctors may not agree with me and are entitled to their professional opinions. They might equally have argued with some justification (but have chosen not to) that there were other patients more likely to benefit from continued ventilation than Alfie who might have had a greater call on the equipment.

Doctors, of course, like parents, are moral agents and should not be forced to do something they believe is clinically inappropriate or even morally wrong. But Alfie’s parents, in seeking a second opinion elsewhere for their child, are similarly doing what they believe is best for him, even if they are clinging to false hope.

No one is suggesting that they are deliberately doing what they know is not in Alfie’s best interests or that they are incapable of seeking help for him.

Overriding parental responsibility should only be contemplated when a parent is harming a child deliberately or out of ignorance, or failing to care for it adequately. But none of these things apply in this case.

So, I do not see why Alfie’s parents should not be allowed to do what they believe is in the best interests of their son, even if it makes no difference to the eventual outcome of his illness. They are his parents after all.

Based on the clinical details that are in the public domain, it seems most likely that Alfie will continue his downward trajectory and die, but if his parents wish to try other treatment options and there are others who are prepared both to take on his treatment and also to pay for it, then the hospital and the courts should not stand in their way.

In doing so they risk appearing paternalistic and controlling and thereby doing huge damage to their own, and our country’s, reputation.

When a doctor or judge in good faith opts not to treat a child because he believes it is not right or appropriate to do so he (or she) should be respected in that professional judgement.

But he should not be able to stand in the way of a second opinion being sought by the child's equally committed parents.

I am not suggesting by this that Alfie's decline is in any way reversible. This is a progressive, terminal condition. But different doctors (both in the UK and abroad) will have different views about whether or not to restart ventilation, how long if so to continue it, and what specific elements of supportive and palliative care to employ.
Posted by Peter Saunders at 15:49 No comments: