Do you know what happened to the girl in this iconic Pulitzer prize winning photo from the Vietnam War? 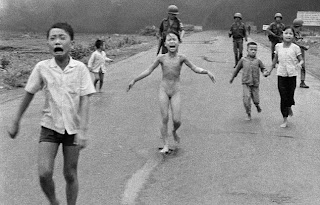 On 8 June 1972, a plane bombed the village of Trang Bang, near Saigon (now Ho Chi Minh City) in South Vietnam after the South Vietnamese pilot mistook a group of civilians leaving the temple for enemy troops.

The bombs contained napalm, a highly flammable fuel, which killed and badly burned the people on the ground.

The iconic black-and-white image taken of children fleeing the scene won the Pulitzer Prize and was chosen as the World Press Photo of the Year in 1972.

It communicated the horrors of the Vietnam War in a way words never could, helping to end one of the most divisive wars in American history and later becoming a symbol of the cruelty of all wars for children and civilian victims.

In the centre of the photo was a nine year old girl, who ran naked down the highway after stripping off her burning clothes.

Kim Phuc Phan Thi was with her family at the pagoda attending a religious celebration when the plane struck and lost several relatives in the attack. The children running with her were her own brothers and sisters. 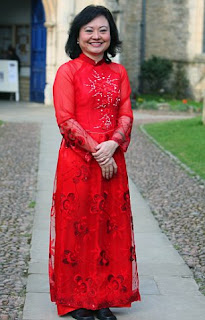 I had the privilege of hearing Kim speak at a meeting in New Zealand a few years ago and the 40th anniversary of the bombing was commemorated last year.

She said, looking back, that three miracles happened on that dreadful day.

The first was that, despite suffering extensive third degree burns to her left arm, back and side, the soles of her feet were not burnt and she could run.

The second was that after she collapsed and lost consciousness the photographer, Nick Ut, took her to Barsky Hospital in Saigon.

The third was that her own mother found her there later that day whilst searching for her children.

Kim remained hospitalized for 14 months, and underwent 17 surgical procedures, until she recovered from the burns.

Grateful for the care she had received she later decided to study medicine but struggled to come to terms with her deep physical and psychological scars.

‘My heart was exactly like a black coffee cup,’ she said. ‘I wished I died in that attack with my cousin. I wish I died at that time so I won’t suffer like that anymore ... it was so hard for me to carry all that burden with that hatred, with that anger and bitterness.’

But it was as a second year medical student in Saigon that she discovered a New Testament in the university library, committed her life to following Jesus Christ, and realised that God had a plan for her life. 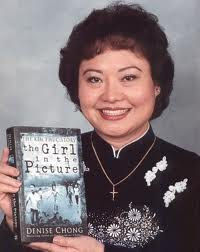 Kim never finished medical school as the communist government of Vietnam realised the value of the ‘napalm girl’ value as a propaganda symbol.

She believed that no man could ever love her with her disfigurement but later studied in Cuba where she met Bui Huy Toan, another Vietnamese student whom she married in 1992.
Kim and Toan went on their honeymoon in Moscow. During a refuelling stop in Gander, Newfoundland, they left the plane and asked for political asylum in Canada, which was granted.

In 1994, UNESCO designated her a Goodwill Ambassador for Peace.

In 1997 she established the first Kim Phuc Foundation in the US, with the aim of providing medical and psychological assistance to child victims of war. Later, other foundations were set up, with the same name, under an umbrella organization, Kim Foundation International.

Her biography, The Girl in the Picture, written by Denise Chong was published in 1999. 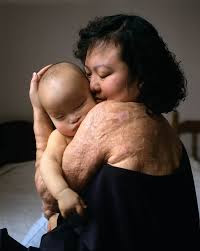 In 2004, Kim spoke at the University of Connecticut about her life and experience, learning how to be ‘strong in the face of pain’ and how compassion and love helped her heal.

Kim Phuc, now 50, lives near Toronto, Canada, with her husband and two children, Thomas and Stephen.

She has dedicated her life to promoting peace and providing medical and psychological support to help children who are victims of war in Uganda, East Timor, Romania, Tajikistan, Kenya, Ghana and Afghanistan.

‘Forgiveness made me free from hatred. I still have many scars on my body and severe pain most days but my heart is cleansed. Napalm is very powerful, but faith, forgiveness, and love are much more powerful. We would not have war at all if everyone could learn how to live with true love, hope, and forgiveness. If that little girl in the picture can do it, ask yourself: Can you?’ (Kim Phuc, 2008)

I know that my redeemer lives, and that in the end he will stand on the earth.
And after my skin has been destroyed, yet in my flesh I will see God;
I myself will see him with my own eyes—I, and not another.
How my heart yearns within me! (Job 19:25-27)


1. Kim Phuc: ‘The girl in the picture’ forty years later

2. I've never escaped from that moment: Girl in napalm photograph that defined the Vietnam War 40 years on