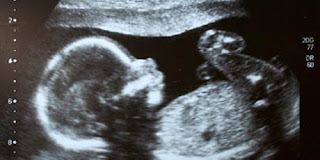 Last night Nadine Dorries, Conservative MP for Mid Bedfordshire, spoke in an adjournment debate on the subject of informed consent for termination of pregnancy.

Adjournment debates allow the House of Commons to hold a general open-ended debate on a subject or a government policy without reaching a formal decision about it. This is often a forerunner of an attempt to change the law.

You can watch the whole video or read the transcript on the parliamentary website.

The key points in her speech were as follows:

Although the abortion figures for last year were slightly reduced by 3.2%, there were still 200,000 abortions carried out in the UK last year-572 per day. Abortion in this country is an industry from which a small number of organisations and individuals make vast amounts of money. No sensible person would condone this. In examining the legislative abortion procedures of European countries with far lower numbers than ours, it occurred to me that for those countries in which informed consent before an abortion takes place is enshrined in law-Germany, France, Belgium, Finland and others-the abortion rate was much lower.

I have deliberately excluded countries with religious and cultural influences, such as Italy, Spain and Portugal from that analysis. It also appears to me that in those countries, the abortion procedure is a far kinder one, which takes much more account of the vulnerable position a woman might be in at the time of her request for an abortion and provides her with alternatives to consider and a cooling-down time in order to think, breathe and take stock of what is happening.

Women are entitled to an option. They are entitled to give informed consent, which should be explicitly supported by pro-choice and pro-life campaigners. When it comes to a decision of such magnitude, it is vital for women to receive information that is absolutely accurate and is given calmly, without coercion or a principled bias and, in particular, without political ideology.

Last month ComRes, the pollsters, revealed after an extensive survey that 89% of people agreed with that. They think that women should be entitled to have more information when requesting an abortion. Given that overwhelmingly high figure, it is time that this House paid some attention. I hope the Minister agrees that it is time that we took a little more care of women undergoing such a procedure. It is time that we introduced a statutory process of informed consent and a cooling-off period. The European evidence shows that that could provide us with a considerable reduction in the number of abortions, and everyone would surely welcome that.

It is time for the UK to catch up with the rest of Europe and introduce informed consent… It is time for this country to start looking after our young girls and women at the most vulnerable time in their lives and treat them with some respect.

You can find a review of the European evidence backing up Ms Dorries position on the CMF website.

In reply Health Minister Anne Milton congratulated Ms Dorries for securing the debate and was not unsympathetic to her position.

She said that the Government would be responding to the House of Commons Select Committee on Science and Technology recommendation to update advice on the mental health consequences of induced abortion and that they have commissioned a systematic review of the evidence, with the report due to be published in spring 2011.

She agreed that the annual figure of 189,000 abortions for England and Wales was ‘still way too high’, that ‘a woman faced with an unwanted pregnancy is extremely vulnerable’ and that ‘the consequences of abortion can be traumatic and far reaching’.

She concluded, ‘Having in place informed consent, appropriate counselling and the right support for women at this vulnerable time will ensure that we do not fail them for the future.’

This morning the Daily Telegraph published a letter from six consultant psychiatrists supporting Nadine Dorries position and calling for a change in the law.

I have reproduced it here:

We welcome last night's parliamentary debate on government policy surrounding the provision of information to women seeking a termination of pregnancy.

In March 2008, the Royal College of Psychiatrists issued a position statement in which they recognised that good practice in relation to abortion should include informed consent involving the provision of adequate and appropriate information regarding the possible risks and benefits to physical and mental health.

A major 30-year longitudinal study that was published in the British Journal of Psychiatry in 2008 showed, after adjustment for confounding variables, that women who had had abortions had rates of mental disorder that were about 30% higher than their peers.

Moreover, the notion of 'informed consent' enjoys massive public support. A ComRes poll published on the anniversary of the Abortion Act last week, shows that 89% of British adults support ‘a woman’s right, enshrined in law, to be informed of all the physical, psychological and emotional risks associated with abortion’.

As consultant psychiatrists we strongly urge Parliament to introduce legislation ensuring that women seeking abortion are fully informed about the possible consequences of their abortion decision.

Media coverage and other resources