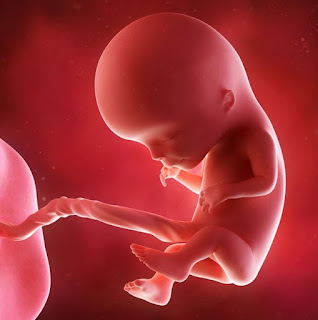 On Friday 25 May 2018 Irish voters backed the legalisation of abortion by a majority of two to one in a national referendum.

The vote repeals the Eighth Amendment of the Constitution — a 1983 measure that conferred equal rights on the baby and the mother, making abortion legal only to save the life of the mother.

The national vote was 66.4% to 33.6% with only one of 40 constituencies, Donegal, voting against it and support was highest amongst urban women under 25, 90% of whom backed it.

Before the referendum, the government had pledged to pass legislation by the end of the year to allow unrestricted terminations up to 12 weeks (see picture), and between 12 and 24 weeks to protect the mother’s health, if the amendment was set aside.

In other words, it treats the life of the mother and baby as equal. From now on that will no longer be so and babies up until 12 weeks will be able to be 'terminated' with impunity.

Ireland’s abortion law will thereby become more liberal that than in Britain which allows abortion only on medical grounds specified under the Abortion Act 1967, even though this law is largely flouted.

Currently in Britain 98% of abortions are carried out on mental health grounds, when there is in fact no evidence to suggest that continuing a pregnancy poses any greater risk to a mother’s mental health than abortion.

Abortion is not healthcare - it treats no illness and offers no healthcare benefit and remains against the Hippocratic Oath. It is, at the end of the day, just killing.

What can we expect now in Ireland?

In 2016 3,265 Irish women travelled to England and Wales to have abortions. But once it is legal in Ireland the number of abortions in that country is expected to rise to 13,000 per year given abortion rates in Britain.

There have been over 9 million abortions in England and Wales since 1967 – an astonishing number equivalent to one and a half times the number of Jews who died in the Nazi holocaust. In fact, there are 43 million abortions every year around the world - almost one in two human deaths involving a doctor or other healthcare worker ending the life of an unborn baby.

Also 92% of all abortions in England and Wales are carried out under 13 weeks, so it is likely that a similar percentage will qualify in Ireland.

Today’s vote will leave Northern Ireland as the only place in the British Isles where abortion remains largely illegal.

Last year it was confirmed that there are 100,000 people alive in NI today because of the current law.

The right to life is the most fundamental of all rights and all other rights depend on it. Every individual human life begins at fertilisation and every abortion stops a beating heart.

But the Irish vote has confirmed that two thirds of voters there do not consider that life before birth has equal value to life after birth.

In other words, they believe that it is legitimate to treat babies before birth differently to those after birth – on the basis of their age, size, dependency and mental capacity.

This is profoundly discriminatory but is being advanced ironically on grounds of equality, diversity and tolerance.

That it has been welcomed by most Irish is a stunning judgement on just how far the country has slid in the last 40 years.

But the roots go back to the sexual revolution and the widespread acceptance of sex outside marriage - it is also stark witness to the ineffectiveness of free contraception in preventing conception and the legacy of believing that people who are not willing or ready to be parents should be having sex.

Ireland, having held out for some decades against the rest of the so-called developed world, has now joined the pack with a vengeance. A society will always be judged on how it treats its weakest members. Women are not the victims here.

It is a desperately sad day for Ireland. The fight for the unborn will go on, but it has just been made a whole lot harder.
Posted by Peter Saunders at 14:19 No comments: