Eugenics – could NIPT for Down’s Syndrome bring us full-circle? 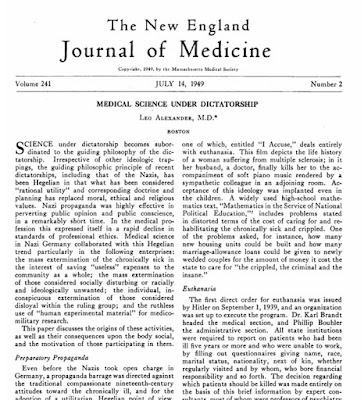 Is it wrong to kill disabled people if caring for them costs more than identifying and destroying them?

The Nazis believed killing in these circumstances was not only right but a public duty and the German public was softened up to accept it through a skilful propaganda campaign which began in the classroom.

Leo Alexander, an American psychiatrist who gave evidence at the Nuremberg trials, described the process in his classic article ‘Medical Science under dictatorship’, published in the New England Journal of Medicine in 1949:

‘Acceptance of this ideology was implanted even in the children. A widely used high-school mathematics text, "Mathematics in the Service of National Political Education," includes problems stated in distorted terms of the cost of caring for and rehabilitating the chronically sick and crippled. One of the problems asked, for instance, how many new housing units could be built and how many marriage-allowance loans could be given to newly married couples for the amount of money it cost the state to care for the “crippled, the criminal and the insane”’

In a seminal article in the 1996 British Medical Journal, ‘Not a slippery slope or sudden subversion: German medicine and National Socialism in 1933’, Hartmut Hanauske-Abel outlined just how meticulously they went about it:

We are shocked by the shameful cold-bloodedness of these calculations and the deliberate way in which the ‘disinfecting’ was carried out. We are thankful we have learnt the lessons of history. But have we?

There is evidence that these kinds of cost-benefit decisions might be creeping back. In the 1990s, the past-president of the European Bank for Reconstruction and Development, Jacques Attali, made the following pronouncement in L'Avenir de la vie:

'As soon as he goes beyond 60-65 years of age man lives beyond his capacity to produce, and he costs society a lot of money... euthanasia will be one of the essential instruments of our future societies.'

But the area where ‘cost-benefit’ calculations are most evident, and discussed quite shamelessly in the medical literature, is prenatal diagnosis and abortion for congenital abnormalities.

About 1% of all abortions in Britain are performed under Ground D of the Abortion Act 1967, effectively for fetal illness or disability. And one of the commonest causes, accounting for about one in three of all these abortions, is chromosomal abnormality. The most common cause of this is trisomy 21 (T21) or Down’s Syndrome. Currently about 90% of all babies with Down's Syndrome detected before birth are 'terminated'.

We don’t hear people openly saying that we should kill babies with Down’s Syndrome before birth because of the burden they create for society. We don’t use that language. But the sentiments are strongly and deeply felt and the issue has been debated in medical journals for many years. Most recently we see it in evidence given by medical bodies to the UK National Screening Committee’s (UKNSC) recent consultation on screening for fetal DNA (cfDNA) in pregnancy.

The NHS is close to introducing a new test for pregnant women that will make it much easier to detect and search out any babies with Down's Syndrome (DS) (see previous CMF blog posts here and here).

The new test, NIPT (non-invasive prenatal screening), involves taking a sample of blood from the pregnant woman which is then examined for abnormal fetal DNA. It is called 'non-invasive' because it doesn't involve 'invading' the mother's womb, as chorion villus screening and amniocentesis do. It, therefore, carries no risk of miscarrying a 'normal' pregnancy.

In their evidence to the consultation the Royal College of Obstetricians and Gynaecologists (RCOG) addressed the cost-benefit issue as follows (emphasis mine):

‘The UKNSC is consulting on offering cfDNA testing to women with a 1 in 150 or greater risk of trisomy. The decision NOT to offer cfDNA testing to all women (primary screen) is based upon the cost (“the UKNSC were concerned that this represented a large opportunity cost and that these resources might be better used by the NHS”). If the decision has been made primarily on cost grounds, then a more rigorous economic analysis has to be made that includes the lifetime costs of caring for children and adults with Down’s syndrome (bearing in mind that cfDNA testing as a primary screen test will identify approximately 289 more babies with trisomies). Such an economic analysis may (or may not) suggest that cfDNA testing for all is cost-effective.’

In other words, the RCOG thinks NIPT will be cost-effective if it costs less to detect and kill babies with Down’s Syndrome than it does to provide them with a lifetime of care and support.

In a similar vein, the British Maternal & Fetal Medicine Society (BMFMS) asks (p20), ‘Why isn’t the cost of caring for a child with T21 included in the analysis?’

One might argue that these doctors' groups are different from the Nazis - they are not dragging adults and children with Down’s Syndrome to the gas chamber - and clearly that is true.

But my point is that their reasoning is the same reasoning that the Nazis used – that if the cost of care is higher than the cost of killing then homicide is justifiable on economic grounds.

Why do they fail to see this more clearly? I wonder if it is because these doctors (the leaders of the RCOG and Fetal Medicine Society) attribute little if any value to life before birth. In other words, they view a baby in the womb in a similar way to how Hitler viewed Jewish people; as a drain on resources and surplus to requirement. Not real people. So, they reason that if we have the technology, and can make it safe for the mother - and she wants it - then what’s wrong with it? The baby’s life has no moral value but it does nevertheless carry an economic cost.

The ‘Don’t screen us out’ campaign (DSUO) is trying to change these perceptions. DSUO describes itself ‘as a grass-roots initiative supported by a collection of people with Down’s syndrome, families and Down’s Syndrome advocate groups led by Saving Downs Syndrome’.

They argue that NIPT does harm to babies with Down’s syndrome and the Down’s syndrome community, violates the Convention of the rights of persons with disabilities and enables eugenic discrimination.


These are strong charges indeed. But if we look at it logically – their argument does make sense. Why are attitudes to disabled people outside the womb so different to the attitudes (expressed above) to those inside the womb?


The key question is this - should the weak be sacrificed for the strong or should the strong make sacrifices for the weak? The Christian answer is clear - bearing one another's burdens is at the very heart of the Gospel. We walk in the steps of the all-powerful creator who laid aside everything and entered this world at great personal cost to rescue, care and serve.

There is no doubt that providing life-time support for people with Down's Syndrome can be costly in emotional and economic terms - but many families will testify that there are great rewards too and that they have much to teach us.

If we are going to talk about cost, then the cost of bringing up a so-called 'average' child in the UK (in goods, university, school and preschool fees, lost parental earnings etc) is around £230,000. Yet no one is seriously suggesting that we apply the economic argument to 'average' children.

So what does this tell us about our attitudes to people with Down's Syndrome? Why are we not up in arms against these doctors who seem to value these people's lives so cheaply? Is it perhaps that it is not just the doctors who are making these assessments? And yet is not the real measure of what kind of a society we are seen in the way we treat those with special needs?
Posted by Peter Saunders at 16:15