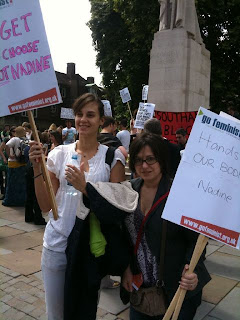 The pro-abortion lobby has been working up to it for months but today’s rally in Old Palace Yard Westminster has broken records only for deep yawns and low attendance.

The event was trailed by the Guardian, trumpeted by Abortion Rights, promoted by Liberal Conspiracy, the country’s most popular blog, and even featured on the new British version of Huffington Post.

It was even pre-tweeted by Polly Toynbee and blogged by Hackney MP Diane Abbott.

So people might have been led to believe that we were in for a repeat of the crowds seen at the royal wedding. Actually no.

The demo was organised in reaction to what we had been told was a growing concern with moves to restrict abortion. The pro-abortionists’ main concerns, according to their press office (aka the Guardian newspaper) are the admission of the pro-life charity LIFE to the government’s new sexual health advisory forum, and the attempt by two MPs, Nadine Dorries and Frank Field, to procure an offer of independent counselling for women with unplanned pregnancies.

These fears are well justified as the government is apparently about to act on Dorries and Field’s recommendations without even taking the matter to a vote in the Commons.

So the pro-abortion lobby’s fears that they are losing their strangle-hold have a strong evidence base. However they seem to be badly mistaken in their assessment of how much support their position has amongst the general public.

I decided to log in to twitter to follow events as they unfolded. First we had a few tweets from prospective attendees about how excited they were to be going, then posted photos of protestors carrying placards, then further tweets about who was speaking.

But not that many!

The reason why was immediately clear from the pictures. Very few people had actually turned up. I looked through the tweets to find a reference to numbers but found only one by former MP Evan Harris referring to ‘hundreds’.

I didn’t have long to wait for this to be confirmed as the Guardian journalist who had been called along to cover the event very quickly posted a report in which he claimed that – wait for it – ‘more than 300 people’ attended. Wow 300! Enough to fill an enclosure measuring almost ten meters square. The police must have been terrified!

If a mere 300 is all that the pro-abortion lobby can gather on a sunny Saturday afternoon in London (why they held it on a Saturday when no MPs are present in Westminster remains a mystery) then Dorries and Field should encounter very little difficulty in their attempts to provide women with a properly informed choice.

In fact the Guardian reports a Health Department spokesman saying in response to the protest that the government is already ‘working on proposals to allow all women seeking abortion to be offered access to independent counselling by appropriately qualified individuals’.

He went on to add, ‘It is vital that any woman considering an abortion is given full and accurate information so she can make an informed decision. Government policy and good practice is that she should be fully informed of the choices available, including alternatives to abortion. Independent counseling would only be for those women who choose to have it. More information will be available after proposals have been finalised.’

What the pro-abortion lobby, stuck in their 1960s time-warp, seem not to have noticed is that the nation has moved on.

Most people now think that there are too many abortions, are seriously disturbed by late abortions and are increasingly convinced, especially by fetal ultrasound and fetal sentience studies, of the humanity of life before birth. And abortion is no longer seen simply as a left/right political issue. The abortion enthusiasts will no longer be able to rely on the unthinking reflex support of trade unions and other traditional Labour voters. It just ain’t that simple any more.

Judging by today’s rally, the pro-abortion lobby are sounding more and more like diehard extremists; too shrill and strident; a case of ‘argument weak, shout louder’.

I can feel a post titled ‘Twenty reasons why the pro-abortion lobby is losing ground’ coming on. Maybe tomorrow.
Posted by Peter Saunders at 14:50