New draft guidance from the BMA will enable doctors to dehydrate and sedate to death large numbers of non-dying patients with dementia, stroke or brain damage 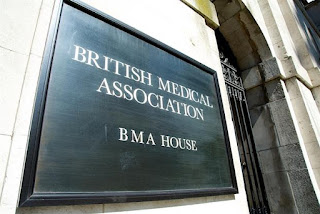 Is it justifiable to withdraw food and fluids from patients with dementia, stroke and brain injury who are not imminently dying?

New ‘confidential’ draft guidance from the British Medical Association (BMA) - the doctors’ trade union - says ‘yes’ provided that a doctor believes it is in the patient’s ‘best interests’.

The 77-page ‘confidential’ document, which is currently out for ‘consultation’ (although only to a few selected individuals), has been prepared by the BMA in conjunction with the Royal College of Physicians (RCP) and the doctors’ regulatory authority, the General Medical Council (GMC).

I understand from the BMA that it will not be open for public consultation at any point before publication in the autumn.

The draft guidance builds on case and statute law and on previous practice guidelines and has huge implications for the care of some of the most vulnerable people in England and Wales.

It comes complete with a six-page executive summary, flow charts and tick box forms to smooth the decision-making process.

The guidance says it is based on the current legal position which it defines as follows:

It focuses on three categories of patients where CANH is the ‘primary life-sustaining treatment being provided’ and who ‘lack the capacity to make the decision for themselves’: those with ‘degenerative conditions’ (eg. Dementia, Parkinson’s etc); those who have suffered a sudden-onset, or rapidly progressing brain injury and have multiple comorbidities or frailty’ (eg. stroke); previously healthy patients who are in a vegetative state (VS) or minimally conscious state (MCS) following a sudden onset brain injury.

It makes it crystal clear that it does not cover patients who imminently dying and ‘expected to die within hours or days’ but rather those who ‘could go on living for some time if CANH is provided’.

So in summary, the guidance decrees that dementia, stroke and brain injured patients who lack mental capacity but are not imminently dying can be starved and dehydrated to death in their supposed ‘best interests’.

Who makes these decisions? If there is an advance directive for refusal of treatment (ADRT) then the patient does (or at least has). If there is an appointed health and welfare attorney then they do, and if it’s not the case that ‘all parties agree’ then it falls to the Court of Protection. But in the remainder of cases – which must by any reckoning be the vast majority – it is ‘usually a consultant or general practitioner’.

No second opinion need be obtained unless there is ‘reasonable doubt about the diagnosis or prognosis, or where the healthcare team has limited experience of the condition in question’ and even if the patient is suffering from PVS or MCS ‘it is not necessary to wait until (investigations) have been completed’ if there is not ‘sufficient evidence’ that they will ‘affect the outcome of the best interests assessment’ (Executive Summary para 14).

In other words, the diagnosis and prognosis are irrelevant if the decision is made that death is in the patient’s ‘best interests’. This is especially disturbing given that PVS and MCS are extremely difficult to diagnose, many patients have some degree of awareness and some later wake up.

And how are best interests to be determined? Decision makers must take into account ‘the individual’s past and present views, wishes, values and beliefs’ and in order to do this should consult ‘those engaged in caring for the patient or interested in his or her welfare’. This would ‘usually include family members and could also include friends and colleagues’.

So, what determines ‘best interests in a given case’?


It boils down to whether CANH is able to ‘provide a quality of life the patient would find acceptable’ (ES p23). Otherwise continuing to provide CANH is ‘forcing them to continue a life they would not have wanted’ (ES p16).

So, by a subtle twist, providing basic sustenance (food and fluids by tube) to someone who ‘would not have wanted’ to be in this ‘condition’ is a form of abuse. How very convenient.

The issue here, of course, is that most normal people do not think that they will find life with dementia, stroke or brain injury ‘acceptable’ and CANH – food and fluids - does not reverse these conditions just as it does not reverse cancer, diabetes, disabliity or mental illness.

This is precisely because CANH is not actually ‘treatment’ but rather part of basic care. But it does not follow that they should therefore have their lives ended. In fact, research shows that people who are sick value the quality of life they have left much more than they would expect to when well.

British parliaments have consistently refused to legalise euthanasia or assisted suicide for people with a quality of life they would not find ‘acceptable’ or would not ‘have wanted’. But the BMA is saying that to end these lives by starvation and dehydration, rather than with a lethal injection or drinking poison, is perfectly acceptable.

It might, and has, been argued that starving and dehydrating people to death over two to three weeks is actually less compassionate than killing them quickly with lethal drugs.

What safeguards are there against abuse of this new guidance? Very few it appears.

There is a section reminding doctors that the GMC requires ‘a second medical opinion’ from a suitably qualified ‘senior clinician’ where it is proposed ‘not to start, or to stop CANH and the patient is not within hours or days of death’. This clinician should (note not must) ‘examine the patient and review the medical records’.

A ‘detailed record’ of the decision-making process should be kept and a ‘model proforma’ (see below) is ‘recommended’.  Decisions should be subject to ‘internal audit and review’ and ‘external review’ by the Care Quality Commission and Healthcare Inspectorate Wales but health professionals need to ‘contribute to’ ‘relevant national data collection’ only if it ‘exists’.

So, no legal, or even ethical, obligations – just suggested ‘best practice’.

Quite how oversight or accountability will be possible is unclear as the death certificates need not make any reference to the fact that the patient died from starvation and dehydration after a feeding tube was removed. Instead ‘the original brain injury or medical condition should be given as the primary cause of death’ (2.11). And so, the doctor’s tracks are perfectly covered.

The body of the draft guidance contains a flow chart (page 19) outlining the decision-making procedure.

The simple ‘recommended’ ‘checklist’ (appendix 4), which could be filled out in a few minutes, could be the only record that remains in the patient’s notes (see inserts).

What is largely disguised here in a lengthy and turgid 77-page document that few doctors or carers will ever read is a simple mechanism for ending the lives of dementia, stroke and PVS patients who are not imminently dying and who otherwise could live for months, years or even decades.

A decision is made by a GP or hospital consultant, on the basis of information about the patient gathered from relatives or carers, that they would not ‘have wanted’ to live this way.

A simple tick-box form is completed, the tube is removed and the patient in question is dehydrated, starved and sedated to death. The true cause of death is not recorded in the death certificate.

I’m not suggesting that large numbers of doctors will not undertake these assessments and decisions with integrity and diligence. But the problem is with the protocol itself. Also, it will only require a few to cut corners out of laziness or driven by malice, ideology or vested interest. This mechanism of ending vulnerable people’s lives – essentially a conveyor belt from nursing home and hospital bed to the morgue – is open to the most extraordinary abuse at every level by health professionals, family members and health institutions who might have an interest, financial or emotional, in a given patient’s death.

Imagine the busy nursing home filled with dependent but non-dying stroke, dementia and brain injured patients whose relatives seldom visit. Feeding tubes have been placed by staff because they are far more convenient than standing over patients and feeding them with a spoon. Wards are understaffed and the patients are difficult to care for.

A visiting GP makes a decision that it is not in a certain patient’s ‘best interests’ to live. Relatives are consulted and agree that their ‘loved ones’ would not ‘have wanted’ to live like this.  A ‘second opinion’ is obtained. Forms are filled out. The tube is removed and the patient moved to a side room to receive ‘palliative care’ consisting of deep sedation until they have died two to three weeks later from dehydration.

The death certificate is falsified with only the underlying condition being recorded. No data are collected and there is no proper internal audit. Everyone is too busy and distracted. No questions are asked or answers given. They are not required as this is all ‘good practice’ approved by the BMA. The police do not investigate. The CPS does not prosecute. The courts are not involved. Parliament turns a blind eye as it lacks the stomach to review the relevant legislation. It is easier to leave it to the doctors and their professional ‘guidance’.

This is a recipe for euthanasia by stealth, but all in the name of autonomy and ‘best interests’ – the very worst kind of doctor paternalism justified on the grounds that the patient would ‘have wanted’ it.

There are conceivably tens of thousands of patients in England and Wales who are vulnerable to the use and abuse of this ‘guidance’. It will be almost impossible to work out what has happened in a given case and there are no legal mechanisms in place for bringing abusers to justice.


How did we get here? This whole process has transpired by a small series of steps – each following logically from the one before and endorsed in case law, statute law, regulations and guidelines going back to the Law Lord’s decision on Hillsborough victim Tony Bland who was the first to die in this way. But the trickle is about to become a flood.

Once we accept that food and fluids by tube is ‘medical treatment’ rather than basic care and that providing this basic sustenance to someone with a medical condition they would not find ‘acceptable’ is not in their ‘best interests’, then we are inviting professionals to devise a simple scheme whereby the starvation of large numbers of non-dying but expensive and ‘burdensome’ patients can be achieved simply and efficiently, and largely undetected, without involving the courts.

When it came to light a few years ago that some doctors were misusing a palliative care tool called the Liverpool Care Pathway to starve, dehydrate and sedate non-dying patients to death there was a national outcry.

One might have expected to see a similar reaction to this draft BMA guidance.  But thus far there has been not a whimper.

I am astounded that no MP or prominent doctor has yet raised any concerns about it. I wonder how long it will be.

You can read CMF’s official response to the BMA draft guidance here.
Posted by Peter Saunders at 06:03