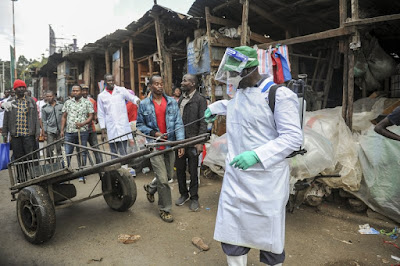 With 80% of coronavirus deaths in Western Europe the focus of the world’s media has understandably been there. The UK had 260 deaths today and has had over 1,000 deaths overall.

But COVID-19 is affecting 199 countries and territories around the world.

But if we were to run this forward to the end of the year what would we find?

A new report this week claimed that doing nothing to combat the virus would leave the world facing around 40 million deaths this year.

But they also claimed that up to 95% of these could be saved if countries act quickly.

Researchers from Imperial College in London have looked at the impact of the pandemic in 202 countries using different scenarios based on data from China and Western countries.

If countries adopt strict measures early (at a stage where there are only 2 deaths per 1,000,000 population per week) - such as testing, isolating cases and wider social distancing to prevent transmission to more people - 38.7 million lives could be saved.

But if these measures are introduced later (at 16 deaths per 1,000,000 population per week) the figure could drop to 30.7 million.

On the other hand, social distancing alone would save only 20 million lives.

The effects of the pandemic are likely to be most severe in developing countries – communication is worse, health facilities are poorer, there are fewer health professionals and a high incidence of chronic infections (like TB) and noncommunicable diseases (heart disease, lung disease and diabetes).

Different demographics mean that older people make up a smaller proportion of the population (21% of people in Wales are in the vulnerable over 65 age-group but only 3% in Ethiopia) but this is more than compensated for by the larger populations and the increased risk posed by larger multi-generation households.

The ten next most populous countries include Philippines, Egypt, Vietnam and Democratic Republic of Congo (DRC) with a combined population of over 400 million.

This Is over twice the population of Western Europe (currently 195m).

There will be 25 times more patients needing critical care than beds available, compared to seven times more in high-income countries, the report says.

Seeking people’s compliance with infection reducing measures like social distancing in a wealthy and technologically advanced country like the UK where education levels are high and communication easy - everybody can be reached easily by text and social media - is one thing.

Achieving this in many developing countries where infrastructure, transport and communication systems are poor by comparison, literacy levels relatively low and where governments and police are more likely to be corrupt, unaccountable, under-resourced and unmotivated is another prospect altogether.

According to the BBC, after the lockdown was announced in India this week, people in Delhi and the financial capital, Mumbai, quickly thronged shops and pharmacies amid fears of shortages.

Meanwhile, millions have been left jobless and without money as a result of the shutdown.

It has also sparked an exodus from major cities, where thousands of migrant workers are setting out on long journeys back to their home villages after transport was stopped.

Corruption means that nothing can be achieved quickly and efficiently. But as the virus spreads, only the most draconian measures will lessen the impact and the countries least able to protect themselves will be among the hardest hit.

Prof Neil Ferguson, from Imperial College London and author of the report, said: ‘Our research adds to the growing evidence that the COVID-19 pandemic poses a grave global public health threat.’

He adds that ’sharing both resources and best practice is critically important if the potentially catastrophic impacts of the pandemic are to be prevented at a global level.’

Strategies to suppress the virus will need to be maintained in some way until vaccines or effective treatments become available to avoid the risk of another epidemic.

The West has huge expertise and now experience in battling COVID-19. But what will we do to help the less-advantaged global south as they face an even bigger challenge?

One thing is clear – if interventions are to have an impact and go any way to saving 95% of the 40 million who could die this year then we must act quickly. In a matter of weeks, it could be too late.

We cannot wait as long as we did in the West before acting – as developing countries do not have enough hospital beds and oxygen, let alone ventilators to provide back up if prevention of spread of the virus is unsuccessful.