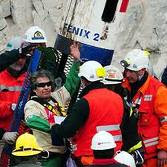 I see that 26 of the rescued Chilean miners have just been welcomed to Manchester United by football legend Bobby Charlton.

Back in October my wife heard an astonishing interview about their rescue on Radio Five Live’s Drive programme.

Reverend Alfredo Cooper, chaplain to Chile’s president, spoke to presenter Peter Allen and gave an amazing testimony about the role prayer and faith had played in the whole drama.

I found the interview on ‘Listen Again’ later that night and transcribed it on this site.

Others copied and pasted the words and a recording of the interview appeared on you tube and on other websites.

Later a friend pointed out to me that one of the miners was wearing the CCC logo of Campus Crusade for Christ on the right shoulder of his T-shirt and the Jesus Film ‘Jesus’ on the left shoulder. The front of the shirt carried the Chilean Flag with the words ‘Gracias Senor’ (Thank you Lord!)

You can see the pictures on this site.

I have just this last week received word of another video featuring the miners titled Chile, The Miners, and Respect for Life.

The six minute video features video footage of the rescue along with interview clips but then goes on to give a prolife message and show some fascinating Chilean government adverts on marriage, family and pregnancy.

Chile has a strong judicial-legal system with their Constitution and civil, criminal, juvenile and health codes protecting the life of the unborn.

Schmidt had also previously announced a few months before at an international UN-related meeting in Brasilia, Brazil, that Chile’s new government is pro-life, and therefore would not accept abortion. As a result, some other Latin American countries followed Chile’s example, and subsequently made similar clarifications.

This is one of the myths highlighted in CMF’s submission to the Department For International Development’s (DFID’s) recent consultation on maternal mortality.

Furthermore this is best achieved through positive engagement with religious leaders, communities and faith based organisations (FBOs).
Posted by Peter Saunders at 09:39