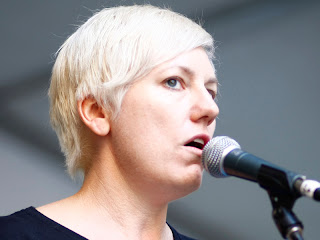 Cate Faehrmann (pictured) is a member of the New South Wales state parliament in Australia who earlier this week introduced a euthanasia bill.

In her speech she made the mistake of attacking a blog I had written about euthanasia in Belgium which had been reproduced on the website of LifeSite News.

She quoted from my blog in order ‘to demonstrate to members the type of tactics used to discredit voluntary assisted dying schemes in operation overseas’ and said that it was ‘a great lesson in lies, damn lies, and statistics’ ( I think she meant ‘lies, damned lies and statistics’ just as she meant to say ‘Philip Nitschke’ and not ‘Philip Nietzsche’)

In order to put the record straight I have reproduced the statements she made in her speech here along with my rebuttals so that it is apparent who was really distorting the truth. The quotes from her speech are in italics.

‘The material circulated was an article headed “Stunning 4,620% increase in Belgian euthanasia cases in ten years since legislation” by Peter Saunders… As Saunders says, the number of euthanasia deaths in Belgium has increased from 24 in 2002 to 918 in 2011.  However, he has miscalculated the percentage increase.  The increase in the ten years is 918-24, which is 894.  So firstly the percentage increase is 3,725% not 4,620%.’ 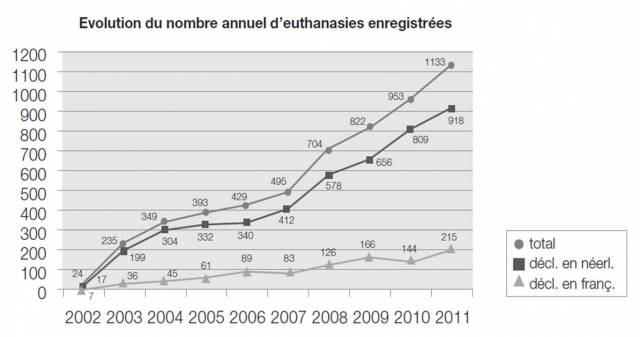 Faehrmann has here confused the figures. The graph in my article (reproduced above from the recent FCEE report for 2010 and 2011) has three lines, one representing euthanasia cases in Flemish-speaking Belgium, one for French-speaking Belgium and an overall total. The figures I gave were the overall total for 2002 (24) and 2011 (1,133). This is actually an increase of 4,620% as I said. Faehrmann has taken the overall total figure for 2002 (24) but the Flemish figure for 2011 (918) to derive her incorrect percentage increase of 3,725%.

Additionally, Belgian euthanasia laws weren’t passed by parliament until late September 2002, which means the 24 deaths that year were in the last 3 months. That’s why the figure is relatively low. But the following year was 235, so arguably that should be the base line number. So that’s more like a four-fold increase from 2003 to 2011.

‘Of course, this percentage increase still seems large. But presenting the figures in this way is misleading.  It stands to reason that in the first few years after the introduction of the legislation the number of euthanasia deaths would be low since the system took some time to be understood by both the medical profession and the public.  Once it was more established annual deaths under the scheme began to increase by about 100 a year to the present level of 918, but that figure comprises only 1% of total annual deaths in Belgium according to Saunders' own source.’

‘Another way of expressing the increase in Belgium is to say that between 2002 and 2011 the percentage of deaths for euthanasia increased from 0.026% of total deaths to 1% of total deaths – hardly “opening the floodgates”!’

Or you could say that the annual number of deaths went from 235 to 1,432 per year in ten years. If this fivefold increase does not ring alarm bells with her then we do have a problem. Although she has placed the words ‘opening the floodgates’ in quote marks I didn’t actually use these words. Instead I said that ‘once euthanasia is legalised steady escalation follows along with a change in the social conscience so that it rapidly becomes accepted as normal’.  I have previously highlighted the similar escalation of euthanasia and assisted suicide cases in the Netherlands, Oregon and Switzerland in recent years.

‘Saunders’ other unsupported assertion is that the FCEC is now considering “extending the right to citizens who suffer from degenerative mental illnesses like Alzheimer’s and also to children”.’

In fact this assertion was not unsupported at all. The full facts and references to the original Belgian source documents can be found here along with previously documented reports from Belgium showing that half of cases go unreported, half of Belgian euthanasia nurses have killed people without request, one third of euthanasia cases in at least one region are involuntary and that euthanasia cases are now being used as organ donors.

A report published late last year by the Brussels-based European Institute of Bioethics claimed that euthanasia was being ‘trivialized’ and that the law was being monitored by a toothless watchdog. After ten years of legalised euthanasia and about 5,500 cases, not one case had ever been referred to the police.

Cate Faehrmann may be passionate about euthanasia but it is a very serious thing for an MP to mislead parliament, especially in introducing a bill.

I am asking her to retract her accusation of ‘lies, damned lies and statistics’, to issue an apology and to correct the errors and omissions in her published speech.
Posted by Peter Saunders at 15:35