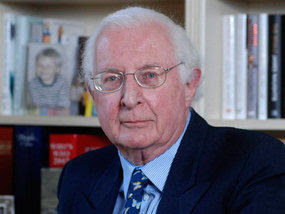 The papers are full today of a report (initially carried by the Daily Mirror) about the first British man with dementia to have an assisted suicide at the Dignitas facility in Zurich, Switzerland.

The BBC is now running the story which will give it even wider coverage but it has also been reported by the Telegraph, Independent and Daily Mail. I have personally been asked to comment by the BBC, Mirror, Times (£) and Telegraph.

This story (on which I originally commented in March) is in the news because Michael Irwin (pictured), who heads up the campaign group SOARS (Society for Old Age Rational Suicide),  gave an exclusive interview to the Daily Mirror reporting that an 83 year old man with early dementia had killed himself at Dignitas seven weeks ago. The Mirror then splashed it on their front page. Now other news outlets are playing catch up in the usual feeding frenzy.

Irwin claims to have ‘helped’ the (unnamed) man in question by referring him to a London psychiatrist (currently also unnamed) who provided him with a medical certificate to say that he was mentally competent enough to make an informed decision about being helped to kill himself.

Irwin believes that assisted suicide should be available to elderly people on demand and seems determined to make himself a martyr for the pro-euthanasia cause by progressively pushing the legal boundaries so this case was very helpful to his cause.

According to the Daily Mirror he now claims to have helped at least 25 people to die at Dignitas.

In 2005 the General Medical Council found him guilty of serious professional misconduct and struck him off the medical register after he admitted supplying sleeping pills to help a friend die although you will seldom see this reported.

Ever since, ironically and curiously, he seems to have escaped prosecution by virtue of the fact that he is no longer a registered medical practitioner. This is in spite of the fact that encouraging or assisting a suicide remains a crime carrying up to a 14 year prison sentence under the Suicide Act 1961.

This is because the Director of Public Prosecutions has decided that he hasn’t yet fulfilled his prosecution criteria. The problem this has created is that Irwin will go on annexing the Sudetenland until he provokes a reaction from the DPP or police because he sees that any reaction will give even more publicity to his cause.

However there is now a new twist to the tale. In deliberately concealing the identity of the London psychiatrist who issued the certificate of mental capacity to this patient Irwin may well now be obstructing the course of justice.

The Director of Public Prosecutions makes it clear that doctors acting in a professional capacity to assist a suicide are likely to be prosecuted and the General Medical Council (GMC) has warned that such doctors risk censure, including being struck off the medical register (see details of DPP and GMC guidelines here).

That would seem to place the unnamed psychiatrist at risk of both being prosecuted and also losing his licence to practice.

So at very least it would seem that this case should be fully investigated by the police and the GMC.

However on past form I would expect that Irwin will make it extremely difficult for them. He has cleverly, with the media’s full cooperation, created an unsolved mystery that will run and run and ensure that he himself stays in the media spotlight.

The reason for this is that Irwin is actually a campaigner who craves publicity. So he will talk to the media when it suits him but will also withhold incriminating information when it best suits his cause.

He is playing ‘catch me if you can’.

I suspect he would quite like to be prosecuted to give his cause even more of the oxygen of publicity and will continue to push the envelope more and more until he elicits a response.

Those selling newspapers are of course only too happy to oblige but in the process they risk fuelling more anxiety and suicide contagion amongst the worried well.

What we learn from Irwin is that pro-euthanasia campaigners will always push the boundaries. This is because once you accept the argument that there is such a thing as a life not worth living it is not possible to draft a law to encompass all who would like to fall within its remit without eventually opening it up to everyone.

The minute assisted suicide is allowed for anyone at all others will come using the same arguments of  compassion and autonomy with allegedly equally deserving cases that fall just outside the existing legal boundaries. And they will claim that in the interests of equality they should have access to it too.

And so we see in any jurisdiction where euthanasia or assisted suicide has been legalised that incremental extension steadily takes place (eg Oregon, Belgium, Netherlands).

First there is a year by year increase in numbers and then, accompanying this, a widening of the categories of people to be included.

First we have mentally competent, adults with less than six months to live (as Dignity in Dying and Lord Falconer are pushing for here). Then there are those who are ‘suffering unbearably’ (in mind or body) but not terminally ill; then minors who are judged capable of making up their own minds; then the mentally incompetent who ‘would have wanted it’ had they been able to say.

Irwin wants assisted suicide to be available not just for those who have early dementia, but for any elderly people who feel that their time has come.

The problem is that one cannot grant the legal right to assisted suicide to any group without at the same time removing legal protection from other similar people.

This pressure would be felt with real intensity at this time of economic recession when many families are struggling to make ends meet.

Given the number of people and organisations who stand to gain financially from the deaths of elderly people it would be a certain recipe for personal and institutional elder abuse.

People with dementia and their families need the best possible care and support, not campaigns for the removal of their legal protection.

Our current law provides the right balance. On the one hand the penalties it holds in reserve act as a powerful deterrent to exploitation and abuse. On the other hand it gives discretion to prosecutors and judges in dealing with hard cases. It does not need changing.

The odd thing about this whole drama is why this 83 year old man, given his obvious mental capability, did not simply take his own life without requiring assistance.