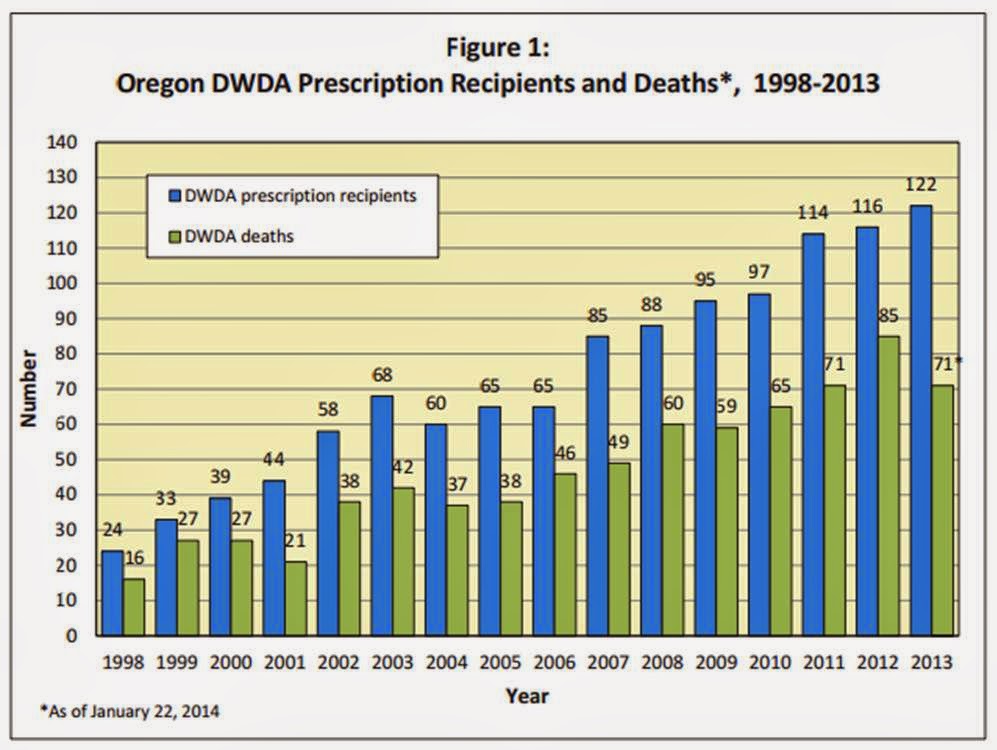 Lord Falconer wants to legalise assisted suicide for adults who are mentally competent and have less than six months to live based on the ‘Oregon model’.

Since assisted suicide was legalised in Oregon there has been a steady annual increase in the number of prescriptions written for lethal drugs and in numbers of people killing themselves.

In 2013 there were 71 deaths – an apparent fall. But this was number that had been reported by 22 January 2014 and there were still 31 patients for whom ‘ingestion status’ was unknown.

For 2012 it was initially reported in January 2013 that there were 77 deaths – but also 25 whose ‘ingestion status’ was unknown - this increased to 85 once all figures were in so we can expect the 2013 figures to go up by at least a similar level.

How would this translate to the UK?

Overall since the Oregon Death with Dignity Act (DWDA) was passed in 1997, a total of 1,173 people have had DWDA prescriptions written and 752 patients have died from ingesting medications.

So over a similar time period, all other things being equal, we would expect 10,528 assisted suicide deaths in England and Wales.

This pattern of steady annual increase in number is also evident in other jurisdictions which have legalised either assisted suicide or euthanasia.

The number of assisted suicide deaths in neighbouring Washington State, increased by at least 43% in 2013.

According to Dutch media reports, euthanasia deaths in the Netherlands in 2012 increased by 13% to 4188.

There is also widespread evidence of under-reporting. The Lancet recently published a long awaited meta-analysis study which indicated that in 2010, 23% of all euthanasia deaths were not reported meaning that the total number of deaths last year may not have been 4,188 but rather 5,151.

Could similar under-reporting be happening in Oregon? It is a virtual certainty.

So with an Oregon law we can expect to see steadily increasing numbers of assisted suicide cases year on year in England and Wales, along with an unknown level of underreporting.

But that’s just one disturbing fact about assisted suicide in Oregon. There’s much much more to come.


Let’s not follow Oregon’s lead.
Posted by Peter Saunders at 14:05