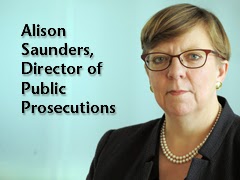 In an astounding about face for the Crown Prosecution Service, the Director of Public Prosecutions, Alison Saunders (pictured), has today rewritten her prosecution policy so that doctors can now be involved in assisting suicide without fear of prosecution, provided they don't have a professional relationship with those they 'help' (See Daily Mail here and here,  Daily Telegraph, Yahoo, Premier, CT, ES).

The move has not surprisingly been welcomed by euthanasia campaigner Michael Irwin, and will also be music to the ears of Philip Nitschke.

Both Irwin and Nitschke are medical practitioners who have become media celebrities through their high profile campaigning for the legalisation of assisted suicide, and high profile assistance to those wanting to end their own lives.

Now it will be much easier for them to do so without a backward glance.

Michael Irwin was found guilty of serious professional misconduct by the General Medical Council in 2005 and was struck off the medical register after admitting supplying sleeping pills to help a friend kill himself. He now claims to have helped at least 25 people to die at the Dignitas facility in Switzerland.

Irwin, nicknamed 'Dr Death' for his activities, said the change was a 'wonderful softening' that would 'make life easier' for people like him.

Nitschke, who travels the world instructing people in how to end their lives using barbiturate drugs and nitrogen, is currently being investigated by police in every Australian state over his possible role in nearly 20 deaths in the past three years.

Both men will now be able to sleep more easily in their beds and to continue their activities in Britain with considerably more peace of mind. And the DPP will no longer have to explain why she hasn't so far made moves to prosecute them.

Under the Suicide Act 1961, assisting or encouraging suicide remains a crime attracting a custodial sentence of up to 14 years.

But in order to be prosecuted any given case must pass two tests applied by the Crown Prosecution Service. The evidence test requires that there be enough evidence to bring a successful prosecution. The public interest test involves the application of 22 criteria, 16 making prosecution more likely and 6 making it less likely.

Up until now a suspect ‘acting in his or her capacity as a medical doctor, nurse, other healthcare professional, a professional carer [whether for payment or not]’ was more likely to be prosecuted.

But the DPP has now amended this criterion so that it only applies if the victim was in his or her care.

In other words, it will not apply in the case of doctors like Irwin and Nitschke who are assisting the suicide of people who are not actually their own patients.

This is very concerning indeed. The Director of Public Prosecutions is effectively at a stroke of her pen decriminalising assisted suicide by doctors and other health care professionals as long as they don’t have an existing professional care relationship with the patient.

This weakens the protections for sick and vulnerable people and effectively gives a green signal to anyone in Europe wanting physician assisted suicide that Britain is open for business. It also opens the door to a Dignitas style death ‘clinic’ being set up in the UK.

Alison Saunders’ new guidance is an invitation to doctors who wish to push the boundaries and assist people to kill themselves to have free rein and go ahead.

The DPP’s job is actually to administer the law, not to usurp the democratic authority of Parliament, which ironically (or was it by design?) is due to discuss this issue in just a couple of weeks’ time.

The DPP has justified her position by reference to a highly contentious statement by one of the judges in last June’s Nicklinson/Lamb judgement in the Supreme Court.

But in so doing she has run roughshod over the original meaning of her own prosecution guidance.

The original prosecution guidance, developed in 2010, made it abundantly clear that any doctor or other health professional who assisted with a suicide was running the risk of prosecution.

Furthermore the General Medical Council (GMC) has warned that such doctors risk censure, including being struck off the medical register (see details of DPP and GMC guidelines here).

Medical defence agencies have interpreted it in this same way in their advice to doctors and it has provided a strong deterrent to doctors abusing their powers.

But now the DPP has swept all of this aside with the mere stroke of a pen. In so doing she is acting way beyond her brief by effectively decriminalising physician assisted suicide by stealth.

When the guidelines were originally drafted by the former DPP, Keir Starmer, they were made subject to lengthy and rigorous public consultation.

But Alison Saunders, rather than fulfilling her duty of upholding the law, has effectively chosen to rewrite it without apparently consulting anyone at all.

By doing this just weeks before Parliament is due to debate the matter she is raising two fingers to British democracy.

In May 2012, the Solicitor General said in a parliamentary debate that if ‘a future DPP overturned the guidelines, (s)he would be judicially reviewed for behaving in a rather whimsical way'.

I hope that such a judicial review will now indeed take place.


But more than that I hope rather that the DPP will be forced to go in front of Parliament to explain why she has rewritten the current law, ignored the will of MPs and peers and put at risk the lives of many vulnerable people in our country.
Posted by Peter Saunders at 16:32