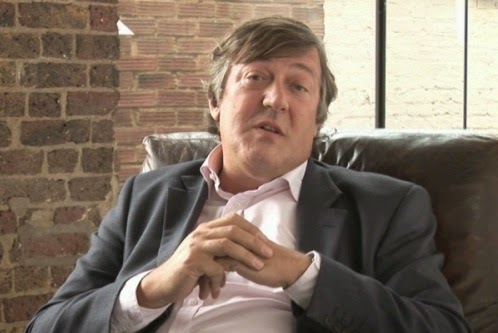 He has 8.6 million twitter followers, a personal fortune of $30 million (£20 million) and recently ‘married’ a 27 year old man.

He is also, not surprisingly, a committed atheist and an outspoken critic of Christianity, Christian ethics and the church.

By his own admission, he doesn’t like God much at all.

In fact this week in an interview for Irish television he denounced God as ‘utterly evil, capricious and monstrous’.

The video and full text of the interview can be viewed here but given Fry’s popularity the clip has had huge interest with over 2 million views on you tube even before it was broadcast.

Fry is asked by veteran Irish TV presenter Gay Byrne what he would say to God if he died and had to confront him.

In his imaginary conversation with God, Fry says he would tell him:

‘How dare you create a world in which there is such misery that is not our fault? It’s not right. It’s utterly, utterly evil. Why should I respect a capricious, mean-minded, stupid God who creates a world which is so full of injustice and pain?’

‘ I would say: “bone cancer in children? What’s that about?” Because the God who created this universe, if it was created by God, is quite clearly a maniac, utter maniac. Totally selfish. We have to spend our life on our knees thanking him?! What kind of god would do that?’

‘Yes, the world is very splendid but it also has in it insects whose whole lifecycle is to burrow into the eyes of children and make them blind. They eat outwards from the eyes. Why? Why did you do that to us? You could easily have made a creation in which that didn’t exist. It is simply not acceptable.’

‘It’s perfectly apparent that he is monstrous. Utterly monstrous and deserves no respect whatsoever. The moment you banish him, life becomes simpler, purer, cleaner, more worth living in my opinion.’

Fry’s insect illustration is not original but actually borrowed from fellow atheist and celebrity naturalist David Attenborough. But what are we to make of his outburst?

Let me offer some reflections.

The problem of evil - how an all knowing, omnipotent and benevolent God can allow evil and suffering – is not new but has exercised the greatest philosophical and theological minds for centuries. During this time the number of Christians on the planet has increased astronomically suggesting that most do not see it as an insuperable barrier to faith.

Attempted answers to the problem are called theodicies. I’ve tackled it before on these pages giving some of the major arguments – namely that we live in a fallen world, that God has given men and angels free will and that the mystery of suffering needs to be understood through the eyes of faith and in the light of the future.

Fry’s argument is that certain kinds of evil – for example cancer and parasites in children – are not the consequence of direct human action and that therefore God must have caused them. If God exists, he ought to intervene either to prevent them or cure them. In fact Fry goes further than this to suggest that God ‘could easily have made a creation in which (they) didn’t exist’ and is therefore personally responsible for evil and suffering.

But in so doing he makes at least three incorrect assumptions.

Whether it is human suffering as a result of natural disasters, wars, broken relationships, injuries or disease, all is a consequence of this cosmic rebellion. As the apostle Paul puts it – the whole creation is ‘in bondage to corruption’ and has been ‘groaning together in the pains of childbirth until now’. (Romans 8:19-22). God remains sovereign and uses suffering to achieve greater good – CS Lewis has called it his megaphone to rouse a deaf world – but he did not introduce the evil that led to it.

Second, Fry seems to assume that he is in a position to judge which suffering has been caused by God, and which suffering could be eradicated by him without destroying the human and angelic agents responsible for it. In fact none of us are in a position to know the answer to either of these questions. These are mysteries that are unfathomable for us as mere human beings.

When the biblical character Job loses his property, children and health as a result of hostile human interventions and seemingly natural disasters, and demands an explanation from God, he receives no answers. God simply asks him four chapters worth of unanswerable questions. God’s reasons are beyond Job’s ability to understand. He is instead expected to trust God on the basis of what he knows of his character, and to understand that all will be put right in time, either before or after Job’s death.

Again the apostle Paul: ‘the sufferings of this present time are not worth comparing with the glory that is to be revealed to us… for we know that for those how love God all things work together for good’ (Romans 8:18, 28). And again, ‘what no eye has seen, nor ear heard, nor the heart of man imagined, what God has prepared for those who love him’. (1 Corinthians 2:9). God is going to put all things right and create a ‘new heaven and new earth’ where there shall be no death, no mourning, no crying nor pain (Revelation 21:1-4).

Fry, judging by this video he recorded for the Humanist Association, also seems to assume that this life is all there is; and that Christians believe in a disembodied - as opposed to an embodied - existence in eternity. Both these beliefs run directly counter to the teaching, and indeed the bodily resurrection, of Jesus Christ. I'm afraid that I'm with Jesus here.

Third, Fry seems not to understand why God doesn’t bring this intervention now. But the apostle Peter is very clear that ‘the Lord is not slow to fulfil his promise as some count slowness but is patient toward you, not wishing that any should perish but that all should reach repentance’ (2 Peter 3:9). Given that God’s promises are only for those who love him, and not for those who have chosen to persist in rebellion, his final intervention will mean only judgement and banishment for rebels. This is because evil and suffering cannot be eradicated without removing the angels and human beings who are personally responsible for it.

The story of the Bible is one of God working out a rescue plan, initially through his dealings with the Jewish people and finally through the death and resurrection of Jesus Christ, in order to save human beings from judgement and restore them to a trusting and loving relationship with himself. As Paul made clear, God has overlooked ‘times of ignorance’ but ‘now he commands all people everywhere to repent, because he has fixed a day on which he will judge the world in righteousness by a man he has appointed; and of this he has given assurance to all by raising him from the dead’ (Acts 17:30-31).

The apostle John summed this up in what is the best known verse in the Bible, ‘For God so loved the world, that he gave his only Son, that whoever believes in him should not perish but have eternal life’ (John 3:16). But he then goes on to say in the very next verse, 'Whoever believes in him is not condemned, but whoever does not believe in him is condemned already, because he has not believed in the name of the only Son of God.'

So in answer to Fry, God created the world without evil and suffering. These entered the world as a result of angelic and human rebellion. God has organised a rescue plan both to eradicate them and to rescue any human beings who respond in repentance (turning from their rebellion) and faith (trusting obedience). He has prepared a new world for them where everything will be perfect. He has made this possible through the death and resurrection of Jesus Christ, who paid the price for our rebellion on our behalf (1 Corinthians 15:3; Galatians 1:3,4).

Christians are reformed rebels, who have responded to God’s command to repent and believe and as a result have received forgiveness and reconciliation with God. Now they await with great anticipation the new world that is coming. As a result they love God and are doing what they can to encourage others to follow suit.

Fry by his own admission does not love God. He is rather an unreformed rebel who has thus far refused to repent and believe. He may, like Job, have questions for God. Which of us doesn’t? But he should be careful making judgements when he is not in possession of all the facts. On the day of judgement it will not actually be Fry who is asking the questions, or making the judgement calls. He will be flat on his face before the creator of the universe, like the rest of us. He should therefore take more care in what he says and does.

We see the patience and mercy of God in the very fact that he allows the world to go on – with all its attendant evil and suffering – with unrepentant rebels like Fry (and the devil himself) still in it. Fry, like all unbelievers, still has an opportunity to turn, but the offer will not be there for ever.

As an actor Fry will understand that when an actor dies the play is over for them. Likewise Fry’s chance of redemption will end with his death, or Christ’s return, whichever comes sooner. And if he doesn’t take it, but persists in his rebellion, then he will be overthrown, completely, utterly and finally.

It won’t be pleasant.

It may be too late for many but it’s not too late yet for Stephen Fry. Yes God is really that gracious and merciful.

I wonder what he will do?

At this very moment his prospects don’t look good – but then every Christian will testify that theirs didn’t look good either, before they repented and believed.
Posted by Peter Saunders at 15:03