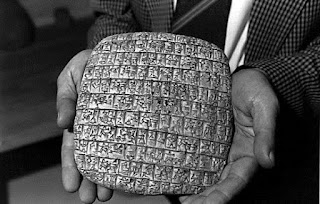 The Christians in Pakistan website published an interesting article last week on Old Testament Archaeology which I have summarised here.

Old Testament critics previously argued that Moses invented the stories found in Genesis. In doing so, they basically claimed that there was no verification that the people and cities mentioned in the oldest of biblical accounts ever really existed.

However the discovery of the Ebla archive in northern Syria in the 1970′s put paid to all that.

In a large library inside a royal archive room the excavating team discovered almost 15,000 ancient tablets and fragments dating from 2400 -2300 BC.

When joined together these accounted for about 2,500 tablets which confirmed that personal and location titles in the Biblical Patriarchal accounts are authentic.

For a long period of time, the critics of the Old Testament used to argue that the name ‘Canaan’ was used wrongly in the early chapters of the Bible. But the word ‘Canaan’ appears on the Ebla tablets proving that the term was actually used in ancient Syria during the time in which the Old Testament was written.

Additionally, the cities of Sodom and Gomorrah, destroyed at the time of Abraham, were also thought to be pure fiction by Bible critics. But these cities are also identified in the Ebla tablets. Also mentioned is the city of Haran, described in Genesis as the city of Abram’s father, Terah.  Previous to this discovery, ‘scholars’ doubted the actual existence of the ancient city.

In addition to this, countless other archaeological findings confirm the biblical records to be real and accurate. Some of these findings are listed below:

Further blogs on the reliability of Scripture

Why the whole Bible speaks with the authority of Jesus Christ himself
Is the Bible reliable? A brief overview of the most common objections.
How do we know the NT documents were written in the first century?
Posted by Peter Saunders at 13:14