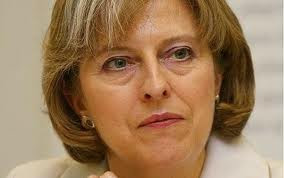 The Home Secretary Theresa May (pictured) is coming under pressure from a variety of sources to offer an apology to Dr Hans-Christian Raabe.

Raabe, a Manchester GP, was sacked by the Home Office from the Advisory Council on the Misuse of Drugs (ACMD) last Monday for failing to declare that he had co-authored a paper in 2005 suggesting that there was an association between homosexuality and paedophilia.

As I reported in my last blog there are actually a significant number of articles in peer-reviewed journals supporting Dr Raabe’s view and one of these papers was even cited approvingly in a Home Office document in 1998.

In yesterday’s Mail on Sunday columnist Peter Hitchens launched an attack on the Home Office, citing the sacking as an example of ‘a militant and highly intolerant political correctness’ that is being expressed ‘from Downing Street downwards’.

He asked Home Office Minister James Brokenshire, the MP directly responsible for the sacking, why ‘being controversial’ was a sackable offence and exposed the hypocrisy of the dismissal in the starkest terms.

‘Who said these words? ‘Approximately 20 to 33 per cent of child sexual abuse is homosexual in nature.’ I will tell you. It was the Home Office, on Page 14 of Sex Offending Against Children: Understanding The Risk, published by the Policing and Reducing Crime Unit in 1998. I have a copy.

For saying roughly the same thing, Dr Hans-Christian Raabe has just been sacked – by the Home Office – from the Advisory Council on the Misuse of Drugs (ACMD). That’s right. He has been sacked from a body to do with drugs, for having unfashionable views about sex, views that the Home Office has itself espoused.

Hitchens also accused the government of caving in under pressure:

…a campaign to remove Dr Raabe, boosted by anonymous misty threats of resignations from the ACMD, roared rapidly into action. And… preferring political correctness to an honest, decent doctor worth dozens of any of them, this Government swiftly bowed to that campaign.

I note that the two people originally bringing Dr Raabe’s views to light – BBC Home Affairs Editor Mark Easton and former Liberal Democrat MP Evan Harris – have both now also criticised the Home Office for the sacking - in spite of playing a major role in fuelling the witch-hunt which led to it (for an account of the latter see Vlad's blog).

Dr Harris said: ‘No adviser should be dismissed purely for holding and expressing entirely lawful views on another subject, no matter how objectionable.’

And last week Mr Easton said: ‘You cannot simply sack somebody appointed to a government advisory body because he/she has strong religious views that are irrelevant to the job in hand. That would seem to be discriminatory.’

According to the Independent on Sunday Dr Raabe has said that he is considering taking legal action against the Home Office unless he receives an apology.

Adding to the furore, anti-drugs campaigners have called on the Home Secretary, Theresa May, to apologise for ‘an unjustifiable personal and professional attack by her ministry’.

David Raynes, from the National Drug Prevention Alliance, described Dr Raabe’s sacking as ‘a vicious and personal witch hunt orchestrated by pro-drugs campaigners’ and said ‘there remains a cabal of people on the committee who are sympathetic to the legalisation of all drugs. It can ill afford to lose people who act as a balance against this view’.

I previously expressed concern about the way four Conservative candidates were treated by the party leadership during the 2010 general election for expressing or holding views on homosexuality which, although shared by a significant number of British people, were, to a greater or lesser extent, out of harmony with current Conservative Party policy.

This latest incident gives further credence to the concern that those in public office are only now tolerated if they tow the line on this controversial issue – regardless of their personal convictions, religious beliefs or interpretation of the available scientific evidence – even if the views they hold have been previously endorsed by the Home Office itself.

This debate will not go away. I see that Melanie Phillips today in a piece on the government proposal to allow gay couples to marry in churches, makes further reference to Dr Raabe's case and highlights growing concerns about the present goverment pushing its new equalities agenda.

She concludes that 'the so-called "culture war" now raging between those determined to destroy Western moral codes and those struggling to defend them is simply the most urgent domestic issue we face' and identifies the impetus for these developments as coming from the Prime Minister himself.

Pinch yourself — a Conservative Prime Minister effectively endorsing the idea that upholding Biblical morality and the bedrock values of Western civilisation is bigotry. He may be a Conservative, but he is no conservative. True conservatives seek to conserve what is most precious in a society and defend it against those who would destroy it.

David Cameron needs the Christian churches to help him realise his vision of a 'big society' where citizens take on welfare roles the governmnet is no longer able or willing to finance. But at the same time he risks shooting himself in the foot by backing the extreme agenda of a strident minority within the gay rights movement.

He is of course entitled to own personal convictions. But he must not allow these convictions to become politicised to the extent that he ends up marginalising and demonising those who hold different views.

There are many people in Britain who take the traditional view that the only context for sex is a lifelong committed relationship bewteen a man and a woman - marriage. They also believe that the new orthodoxy backed by David Cameron and others is more 'ideology-driven' than 'evidence-based'.

These people are not 'homophobic' - they neither fear nor dislike those who choose a homosexual lifestyle. They simply do not share the extreme LGBT lobby's world-view or presuppositions. If you like, they are homosceptic.

In a democratic and multicultural society such people should be free to hold, express and act in accordance with their beliefs and convictions rather than being pushed out of public life. And David Cameron, in pursing his 'muscular liberalism', should attempt to embrace them rather than exclude them.
Posted by Peter Saunders at 14:46