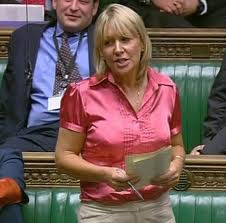 Today we learnt, in response (pasted below) to a Parliamentary question by Nadine Dorries MP (pictured), that we have another week until 25 February to make submissions to the RCOG consultation on the new draft abortion guideline ‘The care of women requesting induced abortion’.

This is a tiny concession which does not address any of the concerns that have been expressed about transparency and process but at least it may help some to contribute who would otherwise not have been able to.

Nadine Dorries (Mid Bedfordshire) (Con): May we have a debate to discuss the relationship between the Royal College of Obstetricians and Gynaecologists and the Department of Health? I ask specifically for this because two members of staff from the Department are sitting on a working group looking into the emotive issue of the care of women during abortion, and if the findings of that group are to be credible, its manner of operations should be above reproach. It is not adhering to Government guidelines on consultation, and that is causing huge concern.

Sir George Young: I understand my hon. Friend’s deep concern on the subject, which she has made one of her special interests. My understanding is that the Royal College of Obstetricians and Gynaecologists is a professional body which is independent of Government, and it has set its own consultation periods. There is a consultation period of four weeks—as is standard for the college—and it ends tomorrow, although any responses received by 25 February will be accepted. However, I will, of course, pass on her comments to my right hon. Friend the Secretary of State for Health.

I wrote to the RCOG President Anne Martin and to Health Secretary Andrew Lansley today to complain about the undue haste and lack of transparency in the consultation on new abortion guidelines. I have pasted my letter to the RCOG along with the replies I received from the RCOG Director of Standards Mrs Charnjit Dhillon and the Department of Health. Perhaps not surprisingly the former has not answered any of my questions and seems not to know about the new deadline for submissions confirmed by the Departmnet of Health.

It has only just been drawn to my attention that the RCOG is conducting a consultation on the draft submission of the 2011 revision of ‘The care of women requesting induced abortion’.

This document has apparently been produced by a ‘multi-professional group’ ‘supported by the Department of Health.

I understand that the draft document was posted on the RCOG website on 21 January and that the deadline for responses is 18 February, leaving barely 21 working days for stakeholders to make submissions.

My initial enquiries amongst colleagues, including leaders of stakeholder organisations, members and fellows of the College and writers and researchers whose work is referred to in the document itself, have revealed that very few people were aware of the consultation or the peer review process. Most now have very little opportunity to make a meaningful response by the deadline.

As I’m sure you are aware the Government Code of Practice on Consultation gives seven criteria that should be reproduced in consultation documents.

The first four of these do not appear to have been followed in this case. Specifically:

Instead this consultation appears to have been conducted in a way that gives stakeholders and peer reviewers little or no opportunity to influence the outcome in any meaningful way and I note that BPAS, one of the organisations represented in the drafting group, is already quoting the guidelines in the national press in a way that implies they have been finalised.

I note from the draft document (p12) that members of the drafting group itself, along with the DH and RCOG, suggested peer reviewers to consult and that the draft was also posted on the RCOG website and comments invited from ‘any member or fellow’.

I wonder if you could answer for me the following questions:

1.The consultation period should be lengthened to twelve week is accordance with the Government Code of Practice.
2.All RCOG College members and stakeholder individuals and organisations should be formally notified.

I am most concerned about the lack of transparency in this consultation process and look forward to hearing from you at your very earliest convenience.

Thank you for your e-mail about the consultation on our draft guideline The Care of women requesting induced abortion.

I should first say that this is not a consultation on a Department of Health policy document. This is a peer review process for an RCOG clinical guideline, and as such, it follows long-established RCOG procedures (also used for the two previous versions of this particular guideline).

Having said that, please do feel free to comment on individual recommendations as appropriate, even if it is a few days after 18 February 2011.

Thank you for your email of 16 February to Andrew Lansley about the Royal College of Obstreticians and Gynaecologists' (RCOG's) consultation on the guidance, 'The care of women requesting induced abortion'. I have been asked to reply.

RCOG is a professional body independent of Governement and therefore they set their own consultation periods. The Department of Health understands that a consultation process of four weeks is standard practice for College.

I have been advised by Department of Health officials that although the consultation for these guidelines formally ended today (18 February), any responses received by 25 February will be accepted.

I hope this reply is helpful.