Bad investments my family have made – reflections on Matthew 6:19-34 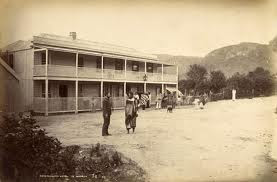 My great, great grandfather Joseph McRae used to own the Rotomahana Hotel (pictured) at a town called Te Wairoa in the central north Island of New Zealand in the late 19th century.

He’s the one on the left.

Te Wairoa was situated by beautiful Lake Tarawera and looked out over the blue water to a huge mountain of the same name.

People came from all over the world and stayed at his hotel on the way to visiting the Pink and White Terraces (see below) – unique natural limestone formations containing geothermal pools.

Some at the time referred to them as the eighth wonder of the world.

But on 10 June 1886 Mt Tarawera erupted and threw out over three cubic miles of rock and ash. 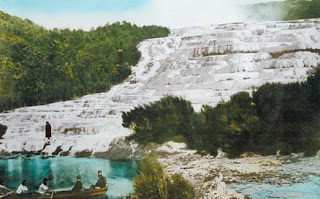 The pink and white terraces were destroyed and Te Wairoa is now known as the buried village.

My great, great grandfather’s hotel was demolished but rather miraculously he survived – which is why I am here to write this today.

The eruption bankrupted him because his insurance company would not pay out and a small piece of rotting floorboard represents the entirety of my inheritance.

It wasn’t a good investment regardless of the fact that this tiny wood fragment means a lot to me personally.

This, however, wasn’t the only bad investment my family made. 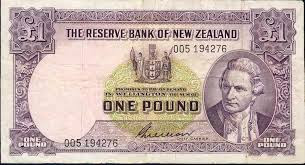 Joseph’s son-in-law, my great grandfather James Purdy, was a blacksmith who didn’t trust banks. He used to come home every pay day and throw his hard earned cash down the back of the family piano.

One day he decided to retrieve this huge wad of £5, £1 and ten shilling notes which was worth an absolute fortune.

So he pulled the piano away from the wall only to find that his precious lifetime savings had been shredded and re-organised into a rats nest.

It’s said that you can’t eat money. But it’s not true. You can, if you are a rat.

His son, my great uncle Alec, was determined not to make the same mistake so he keep his life savings in a huge glass jar in the form of thousands and thousands of three penny pieces – made out of rat-proof metal . 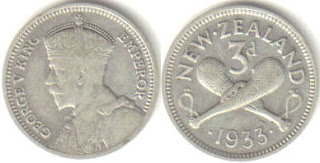 I remember seeing them as a boy. But then in 1967 New Zealand went decimal and they were all rendered valueless.

Now they are kept in a museum.

I tell you these family stories – amusing but true - because they graphically illustrate one of the principle messages of Matthew 6:19-34  - that money and possessions are not nearly as safe and secure as we might think.

‘Money and possessions’ was one of Jesus’ favourite topics of conversation.

This is because the way we handle money is a very good indication of what we really believe and the state of our hearts.

Matthew 6:19-34 comes from the Sermon on the Mount which occupies Chapters 5 to 7 of Matthew’s gospel.

Matthew 5:1 tells us that the Sermon was preached to his disciples and at the very end Jesus says (7:21) Jesus gives a salutary warning:

‘Not everyone who says to me, “Lord, Lord,” will enter the kingdom of heaven, but only the one who does the will of my Father who is in heaven.’

And then he finishes with the well-known story of the two builders, one who built on sand and the other on rock: when the storms came the first fell down whilst the other stood firm.

Note the key difference between the wise and foolish builders. Both heard Jesus words, but only the wise one put them into practice.

So this is a very serious passage – we are meant to hear it and also to put it into practice. I’ve found engaging with its implications immensely challenging on a personal level and I hope that you will too.

In the Great Commission (Matthew 28:19-20) Jesus tells his disciples to make more disciples and to teach them to observe everything he has commanded them – so this certainly includes these words in Matthew 6.

‘Do not store up for yourselves treasures on earth’, he says in verse 19, ‘where moths and rust destroy and where thieves break in and steal’.

I am just about old enough to remember mothballs being put in the pockets of clothing to prevent them being eaten by moths. Rust means corrosion and thieves can take anything transportable or driveable.

Why shouldn’t we store these things up? Because all can go – we can lose them.

There is no such thing as a safe investment – because nothing in this world is secure.

As my relatives found – hotels, banknotes and coins are not secure – but actually nothing is secure.

And now that the world economic system is no longer based on gold money is instead represented by electrical currents in silicon chips – gold has become first paper, then plastic and now sand (silicon) – three of the most valueless commodities on earth.

The blog above is abstracted from a sermon I preached at Spicer Street Church on Sunday 23 June 2013. You can hear the whole sermon on the church website .
Posted by Peter Saunders at 13:49