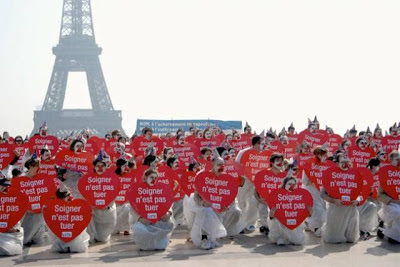 France's medical ethics advisory council (CNNE) has voted against the legalization of assisted suicide, as found in Swiss clinics such as Dignitas, it was announced on Monday.

But French President François Hollande has promised a law on the issue by the end of 2013.

The committee which had been asked to investigate the issue of euthanasia and come up with recommendations voted against Swiss style assisted suicide.

However, the CCNE is in favour of ‘passive euthanasia,’ whereby treatment, hydration and nutrients are withdrawn at the request of an individual facing the end of their life.

'Deep sedation' is one 'end of life' care option the CCNE are in favour of which would see the patient put to sleep until the end of their life, if they have requested it and if they have asked for all treatments to be stopped.

‘With sedation, it is intended to relieve the patient, but in no event bring about their death,’ Vincent Morel, President of the French Society for support and palliative care and a doctor at the University Hospital of Rennes told Europe1 radio.

Later on Monday French president François Hollande announced that ‘at the conclusion of debate,’ his government would introduce legislation on end-of-life care, ‘definitely by the end of the year.’

In February, the ethics council said that out of a ‘duty of humanity’, and where there were ‘persistent, lucid and repeated requests from someone suffering from an ailment for which the treatment has become ineffective,’ it should be legal to withdraw that treatment and allow that individual to die.

But it said at the time that the condition should be verified ‘not by a sole doctor but a medical team’ and did not use the term euthanasia but spoke of ‘assisted death’.

A 2005 law in France already authorises doctors to administer painkilling drugs at levels they know will, as a secondary effect, shorten a patient's life.

A poll that was released in January 2012 found that 60% of the people in France preferred improvements to palliative care rather than legalizing euthanasia.

I have previously highlighted the rapid escalation of euthanasia and assisted suicide cases in the Netherlands, Oregon, Switzerland and Belgium.

In addition, nearly half of all cases of Belgian euthanasia are not reported to the Federal Control and Evaluation Committee. Legal requirements were more frequently not met in unreported cases than in reported cases and a written request for euthanasia was absent in 88%.

A recent study found that in the Flemish part of Belgium, 66 of 208 cases of ‘euthanasia’ (32%) occurred in the absence of request or consent.

According to a recent report Belgium is now the ‘world leader’ in organ removal after euthanasia with at least nine cases since 2005 but suggestions are that there would have been many more had more euthanasia patients had transplantable organs.

In the Netherlands there has been a 15-20% increase in euthanasia cases per year since 2006 and a  recent Lancet paper reports that 12.3% of all deaths in Holland are now due to ‘terminal sedation’.

More recently both Belgium and the Netherlands have announced their intention to escalate their children’s euthanasia programmes.


We will have to wait until the end of the year to see the exact wording of Hollande’s proposed bill but French citizens, seeing the escalation in surrounding countries would be very wise to reject any further weakening of the law.
Posted by Peter Saunders at 14:21