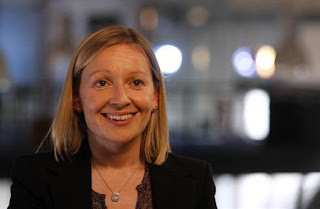 Ireland's Europe minister quit last Thursday over plans to legalise abortion as Prime Minister Enda Kenny pressed ahead with legislation that has polarised the country.

Kenny has provoked a strong backlash by pushing for access to abortion when a woman threatens suicide, a move that opponents say could easily open the floodgates to abortion on demand.

Lucinda Creighton (pictured), once tipped as a possible leader of the Fine Gael party, was automatically expelled from its grouping in parliament for voting against an amendment to the new law and will now lose her role as minister for European affairs.

‘When it comes to something that is essentially a matter of life and death, I think it is not really possible to compromise,’ Creighton told state broadcaster RTE after the vote.

Ireland’s lower house of parliament passed the bill by 127 votes to 31 and acceptance in the upper house is considered by many now to be a formality.

Under the new bill abortions will be legal if ‘there is a real and substantial risk of loss of the woman’s life by way of suicide’ and if an abortion is the only way of averting the suicide. Three doctors must sign off on each case. No time limits are mentioned in the legislation.

Ms Creighton objected vehemently to this clause. She argued that it was unworkable and ‘has the potential to normalise suicidal ideation by enshrining suicide on our statute book for the first time’.

After the vote Ms Creighton said that she was very sad to be forced out of the party. But in a lengthy apologia, Ms Creighton told the Dail that she was not a ‘pro-life campaigner’ but that that abortion was not a ‘liberal’ cause. It was ‘a tool for the oppression of women’. She also disavowed a religious motivation for her principled stand:

‘There is an emerging consensus in Ireland which suggests that having a sense of morality has something to do with the Catholic Church…. This is deeply worrying. It is a lazy way of attempting to undermine the worth of an argument, without actually dealing with the substance. This is not just a Catholic issue, any more than it is a Protestant or Muslim issue. This is not a religious issue. It is a human rights issue… We all have the right to conscientious objection. It is enshrined in Article 18 of the United Nations, Universal Declaration on Human Rights.’

Martin Luther King Jr's argued in his influential ‘Letter from a Birmingham Jail’ - written 50 years ago in April 1963 – that conscience was the lodestar of an honourable man.

Professor John Wyatt has defended its use in medicine saying that ‘the right of conscience helps to preserve the moral integrity of the individual clinician, preserves the distinctive characteristics and reputation of medicine as a profession, acts as a safeguard against coercive state power, and provides protection from discrimination for those with minority ethical beliefs.’

But the right of conscientious objection is increasingly coming under attack from a number of prominent ethicists and writers. According to Oxford Professor Julian Savalescu, a prominent bioethicist:

'A doctor's conscience has little place in the delivery of modern medical care… If people are not prepared to offer legally permitted, efficient and beneficial care to a patient because it conflicts with their values, they should not be doctors’.

A recent article in the New England Journal of Medicine similarly stated:

'As the gate-keepers to medicine, physicians and other health care providers have an obligation to choose specialties that are not moral minefields for them. Do you have qualms about abortion, sterilization and birth control - do not practice women’s health.’

As I have previously argued there is a strong biblical precedent for the exercise of conscience when governing authorities act to threaten innocent human life.

The Hebrew midwives when ordered by the king of Egypt to kill all male Hebrew children refused to do so and as a result we are told that God commended and rewarded them (Exodus 1:15-22).

Rahab the harlot similarly refused to co-operate with the king of Jericho in handing over the innocent Israelite spies (Joshua 2:1-14). She is later praised for her faith in so doing (Hebrews 11:31; Jas 2:25).

The prospect of death as a consequence of disobedience to state law did not stop Shadrach, Meshach and Abednego refusing to bow down to the image (Daniel 4:6-8), or Daniel persisting with public prayer (Daniel 6:1-10). They were defiant.

In the New Testament when Peter and John were commanded by the Jewish authorities not to preach the Gospel they replied,  'We must obey God rather than men' and went right on doing it (Acts 5:29).

As Ms Creighton has argued, abortion is not just an issue that concerns Christians.

It also runs counter to the Hippocratic Oath, the Declaration of Geneva, the International Code of Medical Ethics and the Universal Declaration of Human Rights. In fact the British Medical Association once called it ‘the greatest crime’.


Ms Creighton is to be commended for her courageous stand. What a shame that more did not stand with her.
Posted by Peter Saunders at 11:19