What would a hung parliament really mean for the UK’s constitutional future? 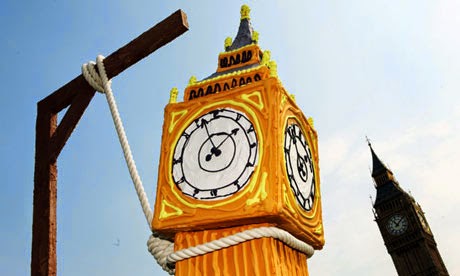 With only four days left to go, who is likely to be governing us after the UK general election on 7 May, and what are the implications for the UK’s constitutional future?

There are 650 seats in the British parliament but only 194 marginal seats (those that would require less that a 5% swing to change hands).

Given that one Conservative MP (currently John Bercow) must serve as speaker, and that Sinn Fein do not take up their seats in the House of Commons, any party or coalition needs 323 seats to govern.

Nate Silver, the pollster who correctly predicted the last two US presidential elections has forecast the following 2015 election result on the basis of the latest opinion polls, historical elections results and census data:

What is most striking here is how different the make-up might be if the UK used a system of proportional representation. The latest opinion polls have Conservatives (34%), Labour (33%), UKIP (14%), Lib Dem (8%), Green (5%).

So whilst UKIP has 14% of popular support, almost twice that of the Lib Dems, they are predicted to win only one seat against the Lib Dem’s 28. 'Is that really fair?', some might ask.

But, that aside, the most notable changes between 2010 and now, apart from the rise of Labour and the fall of the Conservatives, are the dramatic rise of the SNP, the latter mainly at the expense of Labour (see interactive map of constituencies) and the equally dramatic fall of the Lib Dems.

A right of centre coalition of Conservative, Lib Dem, DUP and UKIP would have only 316 seats, 7 short of that needed.

But a left of centre coalition of Labour, Lib Dem, Plaid Cymru, SDLP and Green would have only 306, a shortfall of 17.

But Plaid Cymru, DUP and UKIP have already signalled they will not be entering coalition and the Lib Dems are suggesting that they will drive a much harder bargain than last time. This makes the possibility of a majority coalition even more remote.

This would mean that it would only be possible for either the Conservatives or Labour to pass the Queen’s speech on 27 May with the support of the SNP.

So, the only possibility of Labour continuing in government would be by some kind of vote by vote agreement with the SNP. This would leave Labour at the mercy of the SNP over specific policies like defence (especially Trident which the SNP wants to scrap), the economy and the constitution.

The SNP is strongly opposed to austerity and would push Labour to tax, borrow and spend much more than it would otherwise. It would undoubtedly also push for an early second referendum on Scottish independence.

So it appears that we may have a serious constitutional crisis.

Charles Moore suggested two weeks ago that the Scottish National Party (SNP) is seeking to engineer a reverse take-over of the Labour Party. In reality, they are intent on staging the Scots’ first attempt to capture their bigger neighbour since Bonnie Prince Charlie led his Jacobite army as far as Derby in 1745.

So what will Cameron do with this result?

He remains Prime Minister until he stands down, just as Gordon Brown did in 2010 when he stayed put for five days with far fewer seats than the Tories.

Mr Cameron could challenge the Commons to vote him down (in a vote of no confidence) when it next meets on 27 May or go to the Queen and tender his resignation (which would be curtains for him personally).

This would leave Ed Miliband trying to form a government which he will only be able to do with the support of the SNP. But a minority government does not need a formal pact to sustain it in office, just the votes, and Nicola Sturgeon has all but guaranteed them to Labour.

The Telegraph’s Phillip Johnston has argued that if neither Mr Cameron nor Mr Miliband were able to put together a viable government, a second election would normally follow; but the Fixed-Term Parliaments Act 2011 complicates matters.

‘It provides for a dissolution of Parliament only when there is a specific vote of no confidence in the government or if two thirds of all MPs vote for an election. This makes the prospect of another early general election less likely. In any case, the parties may have little appetite for one given the expense and the prospect of losing support in a fresh contest.

Without a dissolution we would have a legislature but no government, a bit like Belgium, where the prime minister resigned in April 2010 and no new parliamentary majority could be established for almost two years. The country was run by a former prime minister brought out of retirement and a caretaker administration.’

As Johnston concludes, ‘One thing is clear: a minority Labour government, with fewer seats than the Tories, running the country while in thrall to a nationalist party that has only 2 or 3 per cent of the total UK vote, would test our constitutional structures to breaking point, and maybe beyond. More than that, it could test our creaking, centuries-old Union to destruction.’

One thing is abundantly clear. The UK’s days as a two party state where one party has an absolute majority are over. In the 1950s 97% of people voted Tory or Labour. Now barely 67% do.

This is a new era of coalition and shared power. But coalitions in a multi-party democracy can only rule effectively when they have an overall majority. And that may not happen without a shift to some form of proportional representation – like that or Italy, Israel or Greece.


Perhaps that is the direction in which we are inexorably drifting; either that, or Scottish independence, or both.
Posted by Peter Saunders at 23:43