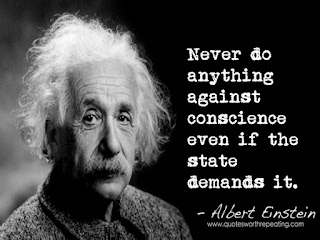 There were three interesting stories this week involving people getting into trouble for exercising freedom of conscience.

The striking thing was that each of these occurred in supposedly democratic countries which pride themselves in upholding human rights – Canada, France and the United States.

In the first the Canadian Medical Association (CMA) voted to reject a motion to protect the conscience rights of physicians who refuse to refer patients to die by euthanasia. This requirement is not yet law but the lack of support for conscience rights from the doctors’ own representative body does not bode well.

The second case involved a French Muslim registrar who was sent to court for refusing to perform a same-sex marriage. The Marseille penal tribunal will render its judgment on 29 September. The maximum penalty for a registrar who illegally refuses to give access to a legal right is a 75,000-euro fine and 5 years' imprisonment.

In the third case a Kentucky county clerk has already been jailed for refusing to give marriage licenses to same-sex couples.

I tweeted about all three of these cases yesterday. The two tweets involving same sex marriage generated the most response and three people came back to me suggesting that custodial sentences were justified for conscientious objectors.

I’ve pasted their tweets below. Interestingly all three were doctors. I found their open hostility quite revealing – a sign of things to come perhaps. I also wondered how they themselves might react if forced to do something they considered morally wrong.

The Bibles teaches that God institutes human authorities and expects us to obey them:

‘Let everyone be subject to the governing authorities, for there is no authority except that which God has established. The authorities that exist have been established by God.  Consequently, whoever rebels against the authority is rebelling against what God has instituted, and those who do so will bring judgment on themselves.’ (Romans 13:1,2)

But Scripture is equally clear that if laws which discriminate against Christians are passed, and obeying such laws involves disobeying God, then there is a place for civil disobedience. In fact when we are forced to do something wrong it is a Christian duty.

When the King of Egypt ordered the Hebrew midwives to kill all male Hebrew children they refused to do so and God commended and rewarded them. (Exodus 1:15-22)

Rahab the harlot similarly refused to co-operate with the king of Jericho in handing over the innocent Israelite spies and was later praised for her faith.( Joshua 2:1-14)

Even death threats did not stop Shadrach, Meshach and Abednego refusing to bow down to the image of the king or Daniel persisting with public prayer.( Daniel 4:6-8, 6:1-10)

When Peter and John were commanded by the Jewish authorities not to preach the Gospel they replied, 'We must obey God rather than men' and continued to do it.(Acts 5:29)

So whilst recognising that we have an obligation to obey the governing authorities God has instituted, nonetheless our obedience to God himself takes precedence if the law of the land requires us to disobey him.

Of course we should do our best to oppose the passing of laws which seek to criminalise normal Christian behaviour. And if their passing looks inevitable we should seek for reasonable accommodation to be made. The Abortion Act and Human Fertilisation and Embryology Act, for example, both contain conscience clauses protecting those with a moral objection to the activities they legalise from being forced to be involved.

But we may not be successful, so in such circumstances we also need to be willing to count the cost and to pay the price for being faithful to God in the face of threats.

The long list of heroes of faith in Hebrews 11 contains those who were delivered from the legal consequences of civil disobedience but also those who paid the price.

And paying the price through facing discipline, dismissal, a fine, imprisonment or even execution may be what God requires us to do in similar circumstances.

In all this we have the confidence that we follow in the footsteps of a Saviour, who in facing everything the greatest Empire on earth could throw at him, willingly carried the cross and emerged ultimately victorious.

'Blessed are those who are persecuted because of righteousness, for theirs is the kingdom of heaven. Blessed are you when people insult you, persecute you and falsely say all kinds of evil against you because of me. Rejoice and be glad, because great is your reward in heaven, for in the same way they persecuted the prophets who were before you.'(Matthew 5:10-12)
Posted by Peter Saunders at 13:19