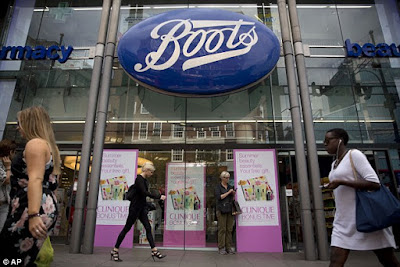 Last night I waded into the debate on whether Boots should reduce the price of the so-called ‘morning-after pill’ and criticised the high street chemist for ‘capitulating in the face of political pressure’.

Let me explain why.

Boots had originally defied calls to slash the price of ‘emergency contraception’ – with its chief pharmacist saying it did not want to ‘incentivise inappropriate use’.

But late on Friday night Boots released a statement to say it was ‘truly sorry’ about its ‘poor choice of words’, and was looking at cheaper alternatives (see here, here, here, here and here).

The about-face was the result of a high-level campaign on social media by abortion provider BPAS and a group of 35 Labour women MPs.

It all began when BPAS (the British Pregnancy Advisory Service) wrote to Boots’ head pharmacist, Marc Donovan, pointing out that generic versions of the Levonelle brand of emergency hormonal contraception can be bought cheaply by pharmacies and can retail for as little as £5.50 in France. By comparison, Boots charges £26.75 for its own version.

Mr Donovan wrote back to say that if Boots did make the pill cheap it could be ‘accused of incentivising inappropriate use’.

This led to an explosion on social media from Labour women MPs calling for women to boycott the chemist and forcing Boots to back down.

I have three main concerns about this whole furore.

First, public policy decisions about women’s health should not be made on the hoof after twitter rants especially when these are strongly ideologically motivated. They should rather be made after proper and robust debate on the facts. The knee-jerk assumption of most people is that making emergency contraception readily available either free or cheap over the counter without prescription will reduce unplanned pregnancies and safeguard women’s health. In fact there is no evidence to suggest that this is actually true (see below).

This latest broadside needs to be seen for what it is – part of a high level campaign by  abortion industry leader BPAS – which receives £30miliion of taxpayers money annually – to advance its agenda of abortion on demand up to birth and free contraception for all. They are prepared to bully, blackmail and boycott to achieve their agenda and sadly few are willing to stand up to them. If MPs wish to influence pharmacy practice they should raise it in the House of Commons in a responsible way, not form a social media lynch mob.

Second, all the evidence suggests that ready availability of emergency contraception does nothing to reduce abortion rates and actually increases rates of sexually transmitted diseases.

A 2012 study in Washington State showed that free access to emergency contraception caused a statistically significant increase in STI rates (specifically gonorrhoea rates) and no change in birth and abortion rates.

The results were almost identical to those of a British study published in the Journal of Health Economics (full text) in December 2010 and reported in the Daily Telegraph in January 2011. (See my previous blogs on this here and here).  The researchers found that rates of pregnancy among girls under 16 remained the same, but that rates of sexually transmitted infections increased by 12%.

In fact, in a systematic review published in 2007, twenty-three studies published between 1998 and 2006 measured the effect of increased EC access on EC use, unintended pregnancy, and abortion. Not a single study among the 23 found a reduction in unintended pregnancies or abortions following increased access to emergency contraception (see also fact sheet here).

The phenomenon whereby applying a prevention measure results in an increase in the very thing it is trying to prevent is known as ‘risk compensation’. The term has been applied to the fact that the wearing of seatbelts does not decrease the frequency of some forms of road traffic injuries since drivers are thereby encouraged to drive more recklessly. In the same way ready access to emergency contraception encourages young people to take more risks and can also be used as a tool by abusers to negotiate for sex.

So making the emergency contraceptive pill available over the counter free or cheap, without prescription, is sadly an ill-conceived knee-jerk response to Britain’s spiralling epidemic of unplanned pregnancy, abortion and sexually transmitted disease amongst teenagers. It is also not evidence-based.

Third, the emergency contraceptive levonelle is already available free from Brook centres, some pharmacies , most sexual health clinics, most NHS walk-in centres,  most GP surgeries and some hospital accident and emergency (A&E) departments. For pharmacies it is a free market. Boots’ own  price tag was based on the cost of the medicine and the regulated mandatory consultation with the pharmacist. It is surely only fair that as a retail pharmacy they don’t compromise or undervalue this professional service.

It is regrettable that Boots has capitulated in the face of political pressure and failed to support its chief UK pharmacist in his legitimate concerns over incentivising the inappropriate use of emergency contraception. It is settled science that making so-called emergency contraception more easily available does not reduce pregnancy rates in a population and actually raises rates of sexually transmitted diseases.

By appeasing this cartel of radical feminist MPs Boots is encouraging more reckless sexual behaviour and thereby exposing young people to an increased risk of sexually transmitted infections. They are also encouraging MPs and sections of the media to force changes in medical practice through bullying, name calling and blackmail rather than sound evidenced-based argument. The same campaign is going to target Lloyd’s Pharmacy next. This is bad medicine, bad leadership and bad public policy.

But perhaps the most frightening aspect of this whole episode is the deafening silence of other sitting MPs at Westminster who by their failure to speak out have signalled complicity with both process and practice.

The best way to counter the epidemic of unplanned pregnancy and sexually transmitted disease is to promote real behaviour change. The government would be well advised to enter into dialogue with leaders of communities in Britain where rates of sexually transmitted diseases and unplanned pregnancy are low, especially Christian faith communities, to learn about what actually works.

Church-based programmes such as Love for Life (Northern Ireland), Love2last (Sheffield), Challenge Team, Romance Academy or Lovewise (Newcastle) are getting great results and have much wisdom to pass on.
Posted by Peter Saunders at 04:29