Why the rush to change blood donation deferral policies for men who have sex with men? 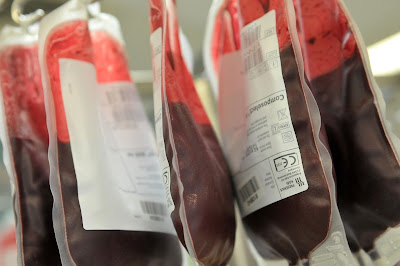 Commercial sex workers and men who have sex with men (MSM) in Britain and Scotland are to be allowed to donate blood three months after they last had sex (see also here, here and here).

The rule changes will come into force at blood donation centres in Scotland in November and in England in early 2018.

The Government accepted the recommendations of the advisory committee on the safety of blood, tissues and organs (SaBTO) and are introducing the changes under ‘equalities reforms’.

Gay rights advocacy groups have praised the move as a triumph for science over prejudice and stigmatisation. Education Secretary Justine Greening (who is herself ‘gay’) has said the changes ‘would build on the progress made in tackling prejudice in the 50 years since the partial decriminalisation of homosexuality’.

All blood that is donated in the UK undergoes a mandatory test for HIV, Hepatitis B and C, and some other viruses.

People do not easily forget the 'tainted blood scandal', where around 4,670 British haemophiliacs were infected with Hepatitis C - and a further 1,243 co-infected with HIV. More than 2,000 people have died because of their HIV and Hepatitis C infections, while many others are terminally ill.

They were infected through contaminated clotting factor products, which were supplied by the National Health Service in the 1970s and 80s.

In recent years, countries around the world have revised their blood donation policies regarding gay and bisexual men, and other men who have sex with men (MSM).

As of 2015, Austria, Germany and Belgium still had lifetime bans for MSM who wish to donate blood.

The lifetime ban on MSM donating blood was lifted in 2011 in England, Scotland, and Wales, and in 2016 in Northern Ireland and was replaced with a one-year deferral period for sexually active MSM.

The United States lifted the lifetime ban on MSM from donating blood in 2015, replacing it with a one year deferral policy allowing MSM to donate if they abstain from sex for 12 months.

Other countries followed suit, while Italy and Spain have implemented deferral policies based on individual risk assessments regardless of sexual orientation.

Canada reduced its lifetime deferral for MSM to five years in 2013 and to one year in 2016.
Japan, the Netherlands, Australia and New Zealand all have one-year deferrals for MSM blood donation.

In Italy and Spain, donors are screened for high-risk sexual behaviour regardless of the sex of their partners or their sexual orientation. Deferrals are made based on individual risk.

But thus far no one has adopted a three month policy.

‘If you ever tested positive for hepatitis B or hepatitis C, at any age, you are not eligible to donate, even if you were never sick or jaundiced from the infection. You should not give blood if you have AIDS or have ever had a positive HIV test, or if you have done something that puts you at risk for becoming infected with HIV. You are at risk for getting infected if you… are a male who has had sexual contact with another male, in the last 12 months’

Britain’s proposed new policy does have a scientific basis. The nucleic acid test (NAT) used to screen blood can detect HIV in just 9–11 days after infection. New technological advances greatly decrease the risk of HIV-infected blood escaping detection; however, they cannot completely eliminate the risk of HIV in the blood supply. Therefore, NAT technology should be used in conjunction with comprehensive individual risk assessments that can adequately screen potential donors for low- and high-risk sexual behaviours.

It is important to keep this in context. The risk of getting HIV from a blood transfusion is lower than the risk of getting killed by lightning. Only about 1 in 2 million donations might carry HIV and transmit HIV if given to a patient.

The risk of having a donation that carries hepatitis B is about 1 in 205,000. The risk for hepatitis C is 1 in 2 million although if you receive blood during a transfusion that contains hepatitis, you'll likely develop the virus.

But the cost of infection is great and just one infection would be a tragedy.

Are we applying the same risk management principles in all areas of population health or do we make a special case of leniency when it involves the LGBT lobby I wonder? I raised similar questions about the speed at which approval the HIV prevention drug PrEP was railroaded through late last year.

I argued back in 2011 that allowing sexually active gay men to donate blood was simply not worth the risk and would recommend that readers revisit that article.

Whilst detection technology has moved on one has to question why going down to a three month deferral period after last sexual contact for both men who have sex with men and commercial sex workers is necessary now given that NHS Blood and Transplant have said there is not currently a shortage of blood in the UK.

Also given that MSM make up just a tiny proportion of the UK population and that far fewer of them will abstinent from sex for a three month period, what is the urgency with this measure?

It would seem sensible to err on the side of caution rather than rushing into this especially given that the majority of the international community are being much more cautious.

The push for this seems to be coming much more from gay rights advocacy groups like the National AIDS Trust and Terence Higgins Trust rather than from any pressing need. And it seems that the aim to avoid stigma for gay and bisexual men is the main driver rather than to address any real clinical priority.

People will be reluctant to question the policy in these circumstances for fear of being accused of discrimination but the powerful media support for this relatively insignificant story speaks volumes about just how powerful the gay rights advocacy media machinery is and the level of priority the mainstream media, and especially the BBC, gives to its stories.
Posted by Peter Saunders at 06:49