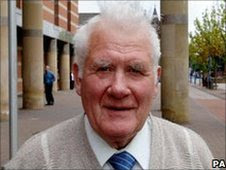 He has since admitted, in an interview with the Daily Telegraph that he deliberately hastened the deaths of patients in his care, some without their consent, and that he acted out of ‘Christian compassion’ in doing so.

As he was cleared five years of three murder charges, on grounds that it could not be proved either that the morphine had killed the patients or that he intended their deaths, the question has now been raised whether he should be tried again.

Under the 2003 Criminal Justice Act, which removed the defence of ‘double jeopardy’, it is now possible for a person to be tried twice for the same crime if new evidence warrants it. The coroner is to review the cases and the Crown Prosecution Service will then have to make a decision about whether to prosecute.

The GMC ruled that Martin ‘violated the rights of the terminally ill’ and that some of his actions had been both ‘dangerous and despicable’. They added that his treatment of some patients had been ‘completely unacceptable’ and that he had acted on the ‘scantiest of evidence’ of unbearable pain. His actions were ‘indicative of an autocratic attitude, in that he seemed always to consider that he was right and rejected, or did not seek, the views of others’.

Someone who deliberately gives overdoses of morphine to patients with the intention of hastening their deaths, refuses to consult other doctors when he finds himself beyond his level of competence, and then lies to the police about what he has done, is not demonstrating ‘Christian compassion’.

True compassion means pulling out all the stops to provide the best possible care to ease patients’ distress whilst staying within ethical boundaries.

It is also simply not necessary to kill the patient in order to kill the pain. It is therefore essential that doctors who find themselves beyond their depth in managing patients with distressing symptoms, should seek advice from specialists in palliative medicine, rather than leaving people with substandard care or, even worse, taking the matter into their own hands.

This case underlines the need for better education about what palliative care can achieve, and better training in palliative medicine for all front line doctors, in order that all patients benefit from the very best care already available in this country.

We will, without doubt, now hear further calls from the pro-euthanasia lobby to change the law to allow doctors in some circumstances to end the lives of some patients on ‘compassionate grounds’. But this would be both dangerous and unnecessary.

The current law, which gives a blanket ban on all so-called ‘mercy killing’ is clear and right and is essential to ensure that the lives of vulnerable people are not exploited or abused. It provides a strong deterrent to abuse through the penalties that it holds in reserve, whilst allowing discretion to both prosecutors and judges to temper justice with mercy in hard cases. It does not need changing.

This tragic case illustrates rather that some doctors can act irresponsibly, incompetently and unethically and yet still claim, and apparently sincerely believe, that they have done nothing wrong, or even worse, that they have acted compassionately. Changing the law to allow any form of compassionate killing would not confer any sort of ‘right to die’. It would rather give doctors the authority and power to kill and provide some with an excuse for what is in reality incompetence, laziness or the unwillingness to seek help.

Recent reports from the Netherlands (showing a further rise in euthanasia cases last year) and Belgium (showing that nurses are now killing patients without their consent) demonstrate how, when euthanasia is legalised for any reason, any so-called ‘safeguards’ will inevitably be abused.’
Posted by Peter Saunders at 11:28