What the Sunday Telegraph doesn’t tell you about repeat abortions 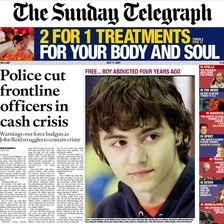 I was quoted on the front page of the Sunday Telegraph this morning in an article reporting that 89 teenage girls aged 17 or under had had their third abortion last year.

The article is accompanied by a strong editorial criticising government sex education policies and suggesting that we should actually be advocating sexual abstinence for teenagers as a way of dealing with what is now an unplanned teenage pregnancy epidemic.

As the article reports, the 2009 abortion statistics show that for the first time over a third (34%) of all abortions were performed on women who had already ended one or more previous pregnancies, that over 1,000 women who had abortions last year were on their fifth at least and almost 50 on their eighth or beyond.

What the Telegraph doesn’t tell you is that we are being denied information about the true level of the problem because the Department of Health has deliberately chosen to suppress information about the numbers of repeat abortions in teenagers (see the gaps in table 4b on page 13 of the report), presumably to avoid further criticism of its failed teenage pregnancy strategy. How many younger teenagers (or 18 to 24 year olds) were on their fourth, fifth, sixth, seventh or eighth abortion? We do not know because we are not being told.

It is increasingly clear that abortion is simply being used as a form of contraception by a growing percentage of women and that the government's tired policy of values-free sex education, condoms and morning after pills is not working in stemming the flow. Given the growing evidence of a link between past abortion and subsequent depression or premature birth (the severity of the latter being directly linked to the number of past abortions) it is clear that this is resulting in a legacy of mental and physical health problems for British women.

It is also profoundly ironic that 97% of abortions are being performed on spurious mental health grounds when there is in fact very little evidence to suggest that continuing with an unplanned pregnancy poses greater risk to a mother's mental health than having an abortion. In fact there is growing evidence to suggest that the very opposite is true.

After over seven million abortions in Britain, 94% of which are now funded by taxpayers' money, the new coalition government has a responsibility to come clean and admit that past strategies have failed to deliver. It is time to appoint better advisors and to have a radical rethink about strategies aimed at curbing promiscuity and its legacy of sexually transmitted disease, unplanned pregnancy and abortion.

There are ethnic, religious and cultural communities within the UK whose rates of unplanned pregnancy, sexually transmitted disease and abortion rates are considerably below the national average. If the new coalition government is really serious about addressing the problems of Britain's so-called broken society, then it should perhaps commission some serious research and seek their advice.

The current policy, by contrast, is based on two false presuppositions – that contraceptives are foolproof and that abstinence is impossible. Neither is true. The best ‘oral’ contraceptive is a word of one syllable – ‘no!’ It would be a refreshing change to see a public policy approach that includes teaching girls how to say it more often and teaching boys to respect it.
Posted by Peter Saunders at 05:24