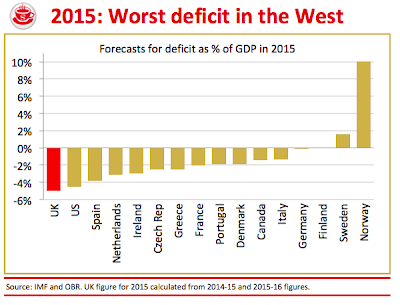 94% of British people don’t understand what is happening to the country’s national debt according to a new Com Res poll.

As explained this week by Spectator Editor Fraser Nelson, most Britons confuse the concepts of deficit and debt and politicians and the media don’t help to resolve the confusion.

To put it simply, the deficit is the amount that the British government borrows every year to balance the budget. This amount has fallen slightly as a percentage of GDP.

But the debt is the total amount the government owes and this amount is rising steadily and will rise a further £600 billion by 2015.

So the fact is that despite all the coalition government’s austerity measures our deficit is rising at such a rate that Britain will have the worst deficit in the Western world by 2015 (see chart). And this means that our national debt is getting bigger, bigger and bigger every year.

But this is not so at all.

Nelson adds, ‘In America, broadcasters tend to use more straightforward vocabulary like “balance the books” and “stem the rise in debt.”’

One wonders if the use of this confusing language is not just incompetence in communication but rather a deliberate ploy to pull the wool over the eyes of British voters and tax payers.

Anyway here’s the poll, sample 2,002 adults… showing that only 6% got the right answer. This you tube video explains it graphically clearly and simply. It should be compulsory viewing.

Which of these statements do you believe to be the most accurate?

Britain owes over £1 trillion. It's real, it's ours… and we've got to pay it back. It's a truly frightening figure. Why is the world's sixth richest country so deeply in debt?

Right now, that debt is growing violently. The Government forecasts it will soar to an eye-watering £1.5 trillion by 2016. To put that in perspective, the UK went bust in 1976 running a budget deficit of 6% of GDP. In 2012 that deficit is going to top 8.9%.

The Good Book says, ‘The rich rule over the poor, and the borrower is slave to the lender.’ (Proverbs 22:7). It also says, ‘The wicked borrow and do not repay, but the righteous give generously’ (Psalm 37:20-22).

How are we personally responding?
Posted by Peter Saunders at 11:39