Brief update of UK news about euthanasia and assisted suicide 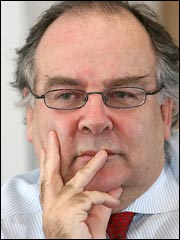 Lord Falconer (pictured) has announced that he will seek to introduce his DiD-backed assisted suicide bill in the House of Lords in May. In line with the recommendations of his sham 'Commission on Assisted Dying', Falconer will push for doctors to be empowered to help mentally competent adults with less than one year to live to kill themselves. New figures from Oregon, whose laws are Falconer's inspiration, serve as a grave warning of the consequences of enacting such legislation - especially given that Oregon's laws are based on a more limited six-month prognosis.

The vast range of different agendas within the pro-euthanasia movement would almost certainly prompt incremental extension once the principle of assisted suicide is established, and Falconer's so-called 'safeguards' are very similar to those in the Joffe Bill which the Lords rejected in 2006.

As politicians begin to consider the upcoming debate, Lib Dem peer Lord Carlile corrected misconceptions regarding legalisation of assisted suicide - which the Liberal Democrats support - as espoused by a party activist. The stakes could hardly be higher.

In the opening weeks of 2013, so-called 'financial incentives' again became a focus for considerable concern. One of our member organisations made a much publicised call* for these to be scrapped and shortly afterwards, Care Minister Norman Lamb pledged* that payments would 'only be made if it could be demonstrated that it improved the care of dying patients'.

MPs had the chance to debate concerns surrounding the LCP in an 8 January Westminster Hall debate secured by Glyn Davies MP* (video, transcript). A number of notable contributions* were made, especially from Fiona Bruce MP*, and training and communication emerged as key focuses for improvement.

On 15 January, the Department of Health announced* Baroness Neuberger as chair of Care Minister Norman Lamb's 'wide-ranging' review of the LCP. Lady Neuberger, previously Liberal Democrat health spokesperson in the House of Lords but a Crossbencher since becoming a senior Rabbi, has worked with the King's Fund, and will be assisted by a panel of experts. The review's work has begun, and they are accepting submissions until 5 April.

The General Medical Council released long awaited guidance on assisted suicide on 31 January, clarifying that doctors may not assist, encourage or advise assisted suicide. Despite attempts by DiD to 'spin' aspects of the documents, this was undoubtedly a good day for patients and for the medical profession.

The news* that 45-year old Belgian twins Marc and Eddy Verbessem were euthanised after discovering that they were going blind - having been deaf since birth - reverberated* around the world in January. What this says about a legal mindset which continues to move further away from talk of 'death with dignity' for the terminally ill is deeply disturbing.

Seeking answers to 'why a country passes such a law, how they work in practise and whether my worries and concerns are justified', actress and comedienne Liz Carr set out to visit the five nations where euthanasia and assisted suicide are legal for a BBC World Service series. Meeting with practitioners, patients, families and campaigners, she gained a unique insight - but remained convinced that euthanasia and assisted suicide are not right for the UK. Read her introduction to When Assisted Death is Legal, or listen again.

On 16 January, BBC3 aired the first episode of its newly commissioned comedy*, Way to Go. Starring Inbetweeners favourite Blake Harrison, the series attracted controversy* for its subject matter: two brothers, in financial straits, decide to set up an 'assisted suicide' business. The show's creators described the black comedy as sensitive*, but initial reviews claimed the show 'may prove that some things just aren't funny'*. We at CNK wanted to give the series a fair chance, initially publishing only criteria for review. Having seen the six episodes, we were glad that the series highlighted key dangers of assisted suicide, but overall concurred with initial reviews: assisted suicide is not a source for comedy. Thank you to all those who contacted us regarding the series.

Michael Haneke's Amour, which caused concern for its sympathetic portrayal of euthanasia, has enjoyed considerable success* during the ongoing awards season, culminating in winning Best Foreign Language Film at the Oscars. The film had, unusually for a foreign language film, been nominated in a number of key Academy Award categories*. What does this say about opinion formers in the world of creative arts?

Jane Nicklinson, whose husband Tony died last year after losing his high profile High Court bid, has been granted permission* to challenge the ruling which refused those seeking to end their lives to do so with medical assistance. 'Martin', whose case was heard in tandem with Nicklinson's, is also appealing. We expect the cases to be heard in early May.
Posted by Peter Saunders at 06:18